Is there any cause for concern for Baywatch’s slender lifeguards? In 2022, artificial intelligence and drones will be everywhere, even on our beaches. Many startups have developed technologies that could very well save lives this summer.

When you swim in the Atlantic Ocean or the Mediterranean Sea, drones can fly overhead. Because no, planes without passengers are no longer just for delivering packages: in 4 or 5 years, experiments have multiplied all over the world to also use them to identify bathers in trouble and even rescue them by sending them a boat. or life jacket.

At the beginning of July in Spain, near the beach in Puerto de Sagunto, in Valencia, a 14-year-old boy, who could no longer reach the mainland, was thus rescued thanks to a drone urgently sent by rescuers. This is the fifth rescue operation carried out since the beginning of the summer season thanks to this “surveillance and rapid response drone” system; installed in 2017.

The idea is obviously not to replace human lifeguards, but to rescue swimmers as quickly as possible in case of an emergency while humans can intervene. As soon as the drone sent him a self-inflating life jacket, the Spanish teenager was able to put it on and wait for the arrival (on a jet ski) of two rescuers. While the drone remained in geostationary flight, above it.

In Spain, the drone in question is produced by Valencia-based startup General Drones. But even in France, drones are being used to save lives. Thus, since 2018, Helper Drone has been supplying drones to municipalities in the southwest of France (for example, in Biscarrosse) to help rescuers at sea. The drone, in particular, allows dozens of lives to be saved every summer on the beaches of the Landes coast, where sea currents are dangerous and take many victims. As Helper Drone explains on its website, the 4kg drone flies “stably”; even with winds of 50 km/h, and which can cover an area of ​​2 kilometers, allows “putting a self-inflating buoy next to a person in a quandary.” Navigation information (GPS, compass, altitude…) “helps visually and technically locate the victim for MNS, helicopters, jet skis, rescue boats… And thanks to the high quality of the video, it offers recognition and remote control of the victim’s condition.”

“Of course, a drone will not replace a boat or a helicopter, it is an additional tool, a bit like a jet ski, that saves you time, organizes the rescue and ensures the safety of the swimmer. Because saving one life, every second counts,” says Anthony Gavend, co-founder of Helper Drone. Indeed, 5 minutes is enough for a person to drown, the use of drones capable of flying at a speed of 15 m/s is fully justified in such a situation…

Along with these drones, which are increasingly appearing on our beaches, another technology promises to help people save swimmers by preventing drowning (as soon as they happen): “smart” surveillance cameras.” They are already being used in urban areas to detect strange behavior or track down suspects, but they are now also being used in the context of maritime rescue operations.

AI is everywhere, including on the beaches, so… in the form of anti-drowning cameras. Israeli startup SightBit recently developed a camera system trained to recognize, through deep learning, the shape of a stranded swimmer. This technology, which is able to scan and analyze everything that happens on the beach and in swimming areas, even with countless swimmers, makes it possible to detect what the human eye, in this case the eye of a lifeguard, cannot detect. .

According to the Times of Israel, “smart” cameras; from SightBit can study the strength of the current and determine “whether a swimmer appears to be in motion or static.” The rescuer carries a tablet that displays software related to the cameras, and when a risk of drowning is detected, SighBit sends him an alert with instructions. “We decided to put this technology in places far away from the ambulances, so these extra eyes are very helpful for rescuers,” says Arie Turgeman, deputy mayor of Ashdod, near Tel Aviv, where this system has already been used. from May 2022. For the Israeli rescuers themselves, such a device allows you to save a person in trouble “much faster.”

Here again, the idea is not to replace the person (because the camera can never dive in and save the person from drowning anyway), but to alert the lifeguards so that action can be taken as quickly as possible. and most efficiently. 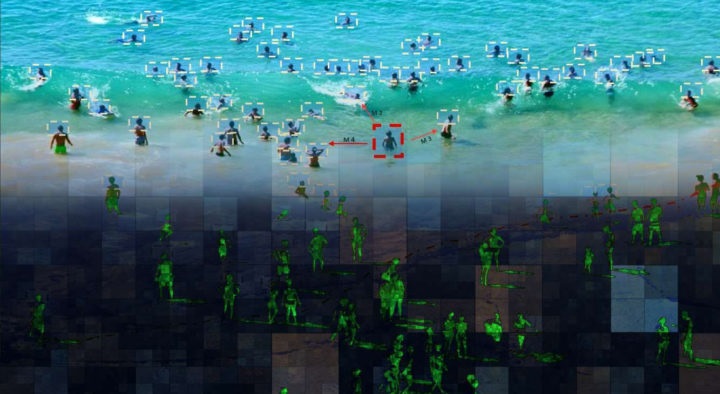 It should be noted that in Australia drones are used not only to prevent drowning, but also to detect sharks, which, if they end up causing only 5-6 fatal attacks a year, terrify swimmers and especially surfers. During the austral summer, drones (again equipped with smart cameras) developed by Westpac Little Ripper and researchers at the Australian Institute of Artificial Intelligence, University of Sydney, with government support, thus fly over Australian beaches to help stranded swimmers, but also detect sharks in the water and alert the rescuers who pilot them.

“We spot sharks and alert swimmers and surfers in real time to get back to the beach,” explains Nabeen Sharma, the University of Sydney scientist who created the system, called the SharkSpotter. “We can identify 16 different objects such as sharks, whales, dolphins, different types of boats and many other interesting things,” adds the computer scientist. The software used, equipped with algorithms, is able to distinguish sharks from other fish and cetaceans with a 90% success rate compared to 16% with the naked eye, he said.

As soon as a shark is sighted, an alarm is sounded and swimmers/surfers are invited to disembark. A little disturbing, but useful for saving lives.