Ugandan President Yoweri Museveni on Friday again ruled out a nationwide Covid-19 lockdown to contain the spread of the Ebola virus despite an alarming increase in cases in the country.

Since the Ministry of Health first announced an Ebola outbreak in the central district of Mubende, the disease has spread throughout the East African country, including the capital Kampala.

But the president rejected plans for a nationwide lockdown, instead urging residents to “be more vigilant” and comply with the measures put in place to control the spread of Ebola.

“There will be NO CONTAINMENT. So people should go ahead and focus on their work without worry,” he tweeted.

The Ebola epidemic has already killed 49 people, according to the Ugandan government. The World Health Organization (WHO), for its part, said on Wednesday that the country has more than 150 confirmed and probable cases, and that the epidemic has claimed 43 lives and 21 probable deaths.

A deserted street during a curfew and lockdown in Mundenbe to combat the spread of the Ebola virus on October 27, 2022 in Uganda (AFP/Archive – BADRU KATOUMBA)

The outbreak was announced on September 20, and eight days later, President Museveni said a nationwide lockdown was “not needed”.

He also ordered the police to arrest anyone who contracted Ebola and refused to self-isolate.

On Wednesday, the WHO expressed concern over the first cases of Ebola in Uganda’s capital and urged neighboring countries to urgently raise their levels of preparedness for a possible spread of the virus. 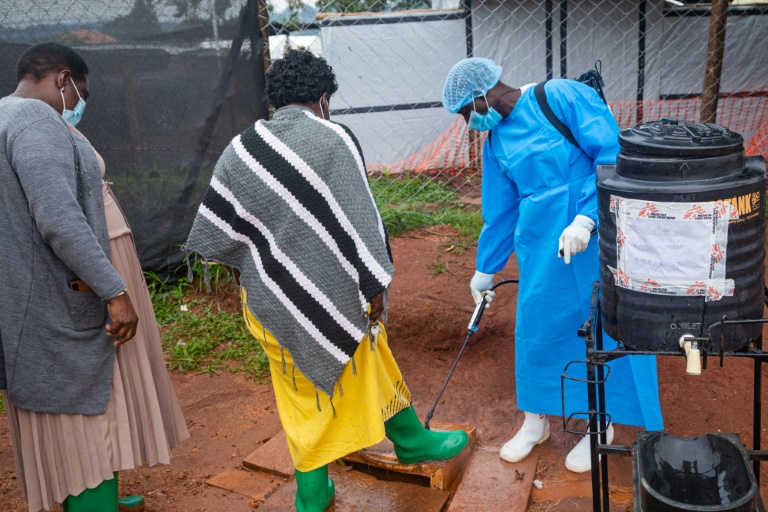 Disinfection of shoes in Mubende to fight the spread of the Ebola virus, on October 27, 2022 in Uganda (AFP/Archive – BADRU KATOUMBA)

Uganda has experienced several Ebola epidemics, the most recent being in 2019. There is currently no vaccine for the strain of Ebola known as the “Sudan strain” that is currently rampant in the country.

Ebola is a frequently fatal viral hemorrhagic fever. The disease owes its name to a river in the Democratic Republic of the Congo (DRC), where it was discovered in 1976.

Person-to-person transmission occurs through bodily fluids, with fever, vomiting, bleeding, and diarrhea being the main symptoms.