Eight cheetahs from Namibia arrived in India on Saturday for the next release into the wild as part of a project to reintroduce the feline, which was declared extinct in this region of the world 70 years ago.

According to authorities, this is the first intercontinental migration of cheetahs, the fastest land animals on the planet.

An ambitious project that, however, divides experts, some of whom are skeptical about its chances of success.

Five females and three males took off from a wildlife park north of Namibia’s capital, Windhoek, in a chartered Boeing 747 dubbed the “cat plane” and flew for 11 minutes.

Indian Prime Minister Narendra Modi led the operation in the Kuno National Park, about 300 kilometers south of the capital New Delhi, an area chosen for its abundant mining and grazing.

Each of the animals, aged between two and five and a half years, was fitted with a collar to track its movements on the satellite.

First, they will be kept in an enclosure for a quarantine period of about a month, and then they will be released into the open woodlands of the park.

However, some experts warn that it may be difficult for these mammals to adapt to a new environment.

The Asiatic cheetah once lived in India, but it was declared extinct in 1952.

Endangered subspecies that once roamed the Middle East, Central Asia and India are now found in very small numbers in Iran.

Efforts to reintroduce the animals to India accelerated in 2020 when the Supreme Court ruled that African cheetahs, a different subspecies, could be introduced to India in a “carefully chosen location” and on an experimental basis.

This is a gift from the government of Namibia, one of the few African countries where this cheetah still lives in the wild.

Negotiations are underway for a similar transfer from South Africa that could involve twelve more cheetahs.

Cheetahs have become extinct in India mainly due to the gradual disappearance of their habitats and hunting for their characteristic spotted coat.

Maharaja Ramanuj Pratap Singh Deo is usually credited with killing the last three cheetahs in the country in the late 1940s.

According to the Cheetah Conservation Foundation (CCF), based in Namibia, cheetahs, carnivorous felines whose ancestors date back to about 8.5 million years ago, once roamed Asia and Africa in large numbers. 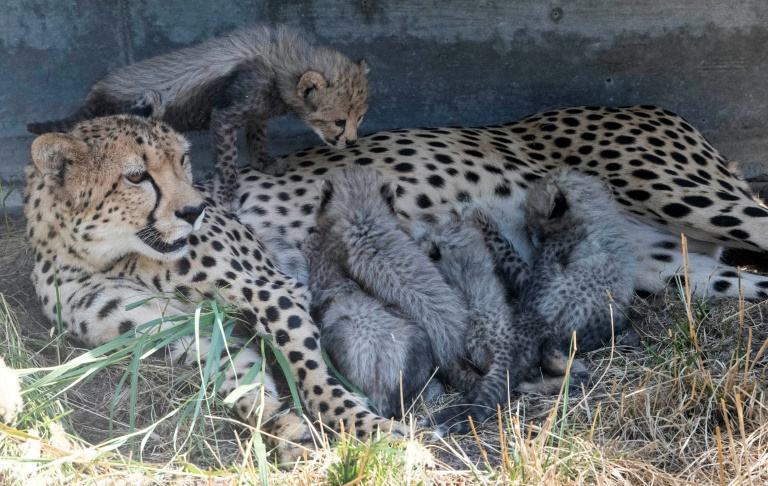 A female cheetah and her litter at the Wilhem Zoo in Stuttgart, Germany on August 5, 2022. (AFP – THOMAS KIENZLE)

Only about 7,000 specimens remain today, mostly in the African savannas.

The cheetah is listed as “Vulnerable” on the International Union for Conservation of Nature’s (IUCN) Red List of Threatened Species.

In North Africa and Asia, it is “critically endangered”.

Its survival is mainly threatened by the reduction of its natural habitat and the extinction of its prey due to human hunting, land development for other uses, and climate change.