Salvadoran President Nayib Bukele, who likes to portray himself as a fashion visionary on Twitter, assures that his regime’s adoption of bitcoin will ensure the future of the Latin American country. At the same time, he is waging a massive repressive campaign against street gangs that threatens to bring him back to the anti-democratic excesses of the past.

“Your investment is safe” 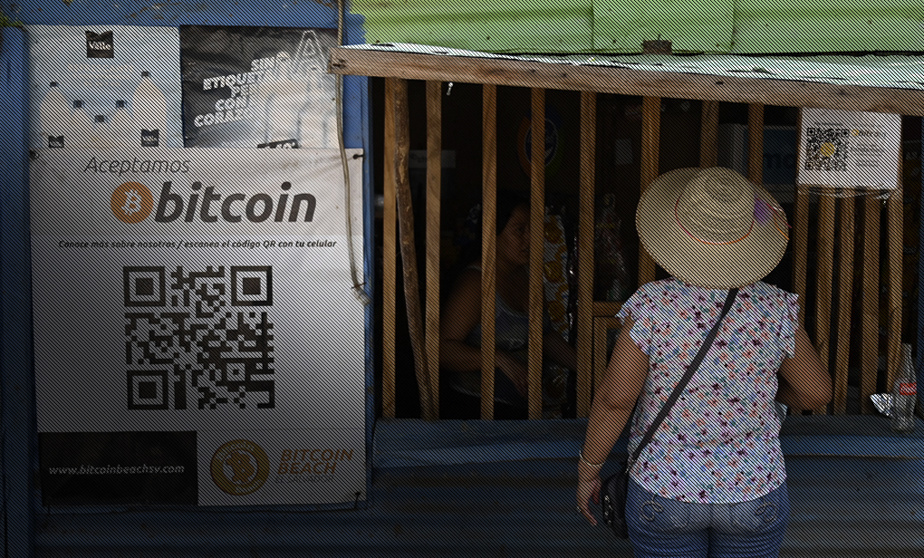 This small business in the Pacific coast resort of El Zonte emphasizes that Bitcoin can be paid on September 4th.

Naib Bukele is a firm believer in the future of bitcoin and is unlikely, at least at first glance, to be discouraged by the extreme fluctuations affecting this cryptocurrency.

In a mid-June tweet, El Salvador’s president urged people concerned about the 60 percent drop in prices seen since November not to worry.

“I suggest you stop staring at the chart and enjoy life… If you have invested in bitcoin, your money is safe,” he said.

The 40-year-old politician returned to the charge a few weeks later, reporting online that El Salvador had just bought $2 million worth of this cryptocurrency under his control to take advantage of the bear market. 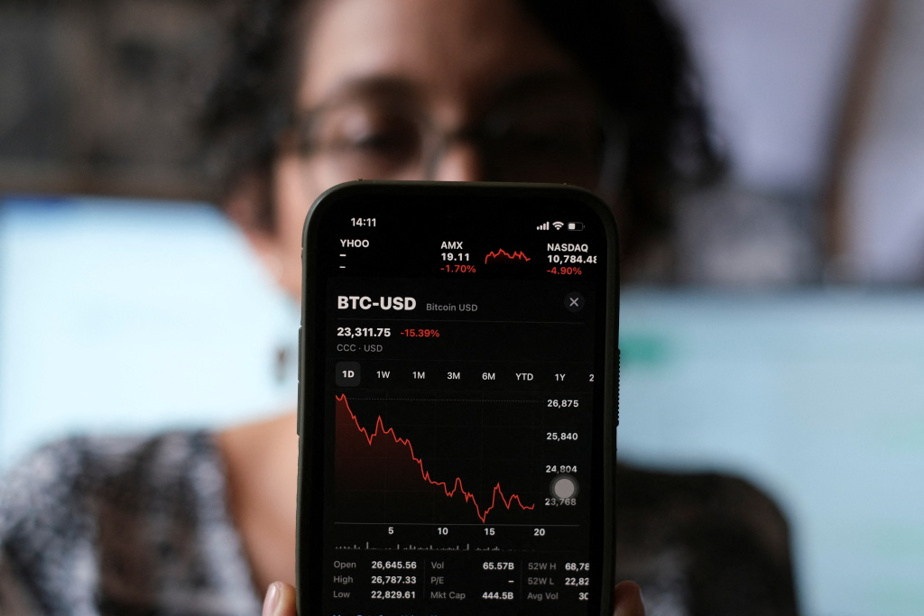 A woman shows on her mobile phone a graph showing the fall of bitcoin in San Salvador on July 13.

“Thank you for the discounted sale! he began, reaffirming the enthusiasm that had led his regime to make El Salvador the first country in the world to recognize bitcoin as an official currency.

The law, passed in September 2021, provides that this cryptocurrency can be used for any transactions, just like the American dollar traditionally used in El Salvador.

The government has created a phone wallet app called Chivo – “cool” in local slang – that allows you to make transactions in US dollars and bitcoin, and deposit $30 for each new user. 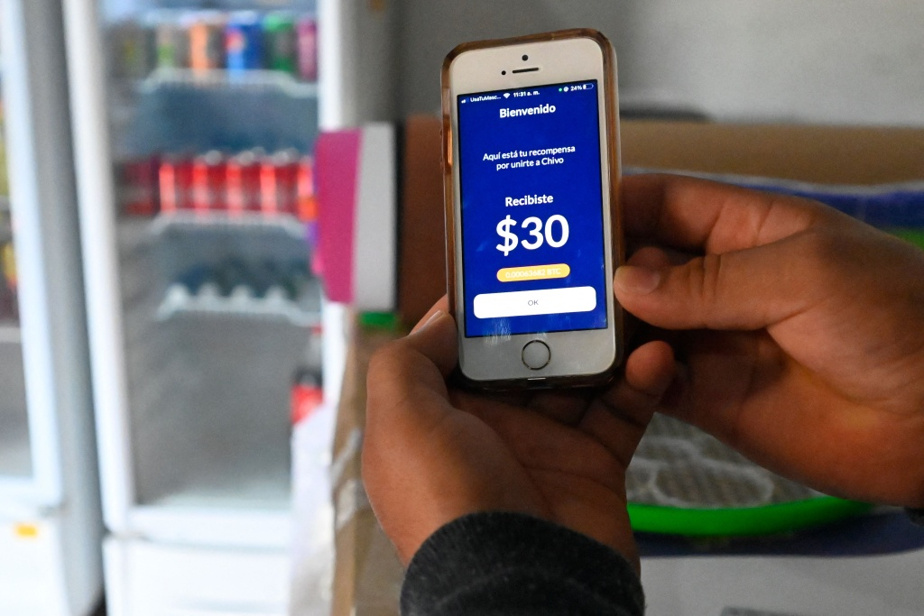 Each new Chivo eWallet user receives $30 from the government. This is the main motivation behind people downloading the app, a recent study highlights.

Bukele said the launch was a great success, with almost 60% of adults in the country of 6.5 million people having downloaded the app on their phones.

Almost a year later, economists’ opinions about this initiative are restrained, to put it mildly, often pessimistic.

One of the goals pursued by this scheme was to provide disadvantaged people who cannot get a bank account with access to financial services on the Internet.

“The Chivo wallet is good for savings, but nothing more,” said Frank Musi, a researcher at the London School of Economics who has closely studied the government program.

According to analyst Frank Musi, Salvadorans using the app also prefer the dollar option, as bitcoin feels “too risky” due to its volatility.

The analyst sees another illustration of this mistrust in the fact that very few Salvadorans who have settled abroad send money back to the country in this way. According to the Central Reserve Bank of El Salvador, less than 2% of transactions made in February were made through e-wallets. 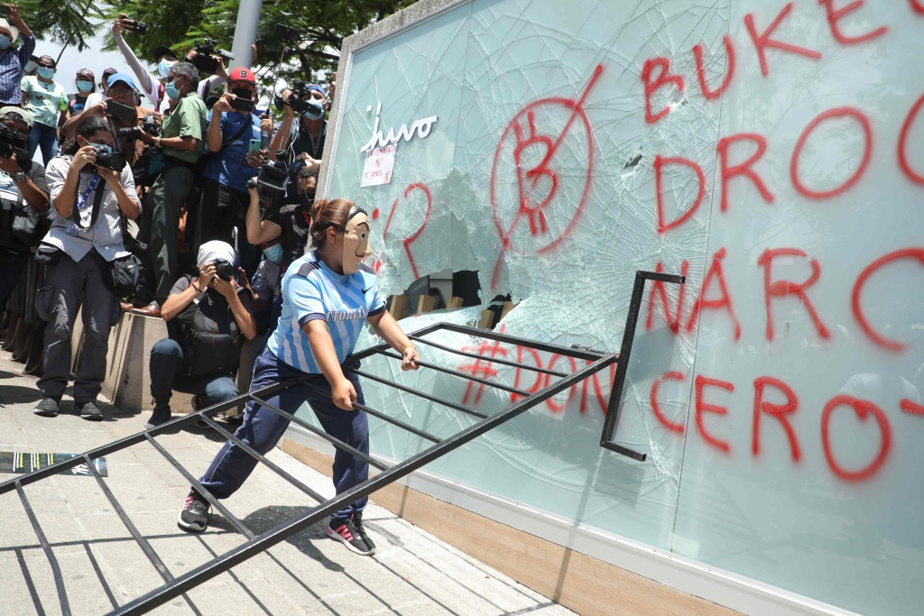 A Chivo ATM was vandalized during a protest against President Bukele’s policies, including making bitcoin the country’s second official currency, in San Salvador on September 15.

A recent study by the National Bureau of Economic Research, which conducted a survey in the country, indicates that the bulk of people who downloaded the app did so in September 2021 when it launched, and it is unlikely that a new download occurred until 2022. .

The main motivation of users, the American organization notes, was to receive the amount of $ 30 provided by the government. Only 20% of them continued to use it, often sporadically, after exhausting the paid bonus.

Muchi notes that the adoption of this cryptocurrency cost the government nearly $350 million, not counting the theoretical loss of almost $60 million associated with the acquisition of bitcoin, which the president has announced so far.

These transactions, the analyst notes, are also impossible to verify, since no ministry has provided accurate data on this. 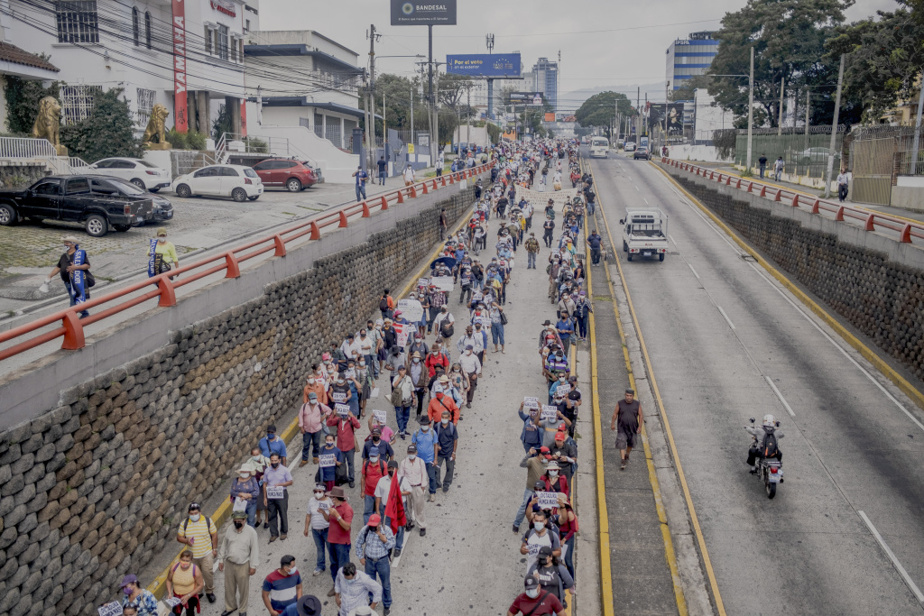 Thousands of demonstrators take to the streets of San Salvador to denounce Bitcoin adoption on September 30th.

Financial markets are “spooked,” according to Mr. Muchi, by the uncertainty and improvisation that accompanies the government’s economic policies, and fear that the heavily indebted country will struggle to repay an $800 million loan that is due in January.

Ruth Eleanor Lopez of the human rights organization Cristosal notes that the lack of transparency of the Bukele regime extends to all levels of government and increases the risk of corruption. 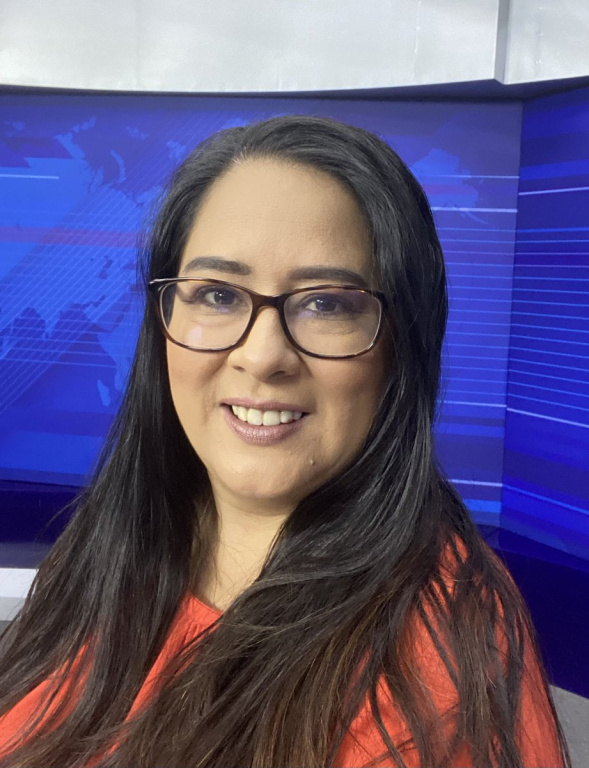 Most of the counterforce institutions are now controlled by people close to the president, depriving the population of important information to assess the regime’s actions both in terms of human rights and in the economic sphere, she says.

Nelson Rauda Zabla, a Salvadoran journalist who is highly critical of President Bukele, recently noted in an open letter that the leaders of the cryptocurrency world shower him with praise on social media and allow themselves to be portrayed as a “brave” leader in the face of the international community.

However, the speech of influencers presenting El Salvador as a role model “because someone pays coconut in bitcoin” is nothing more than a “mirage,” he concludes. 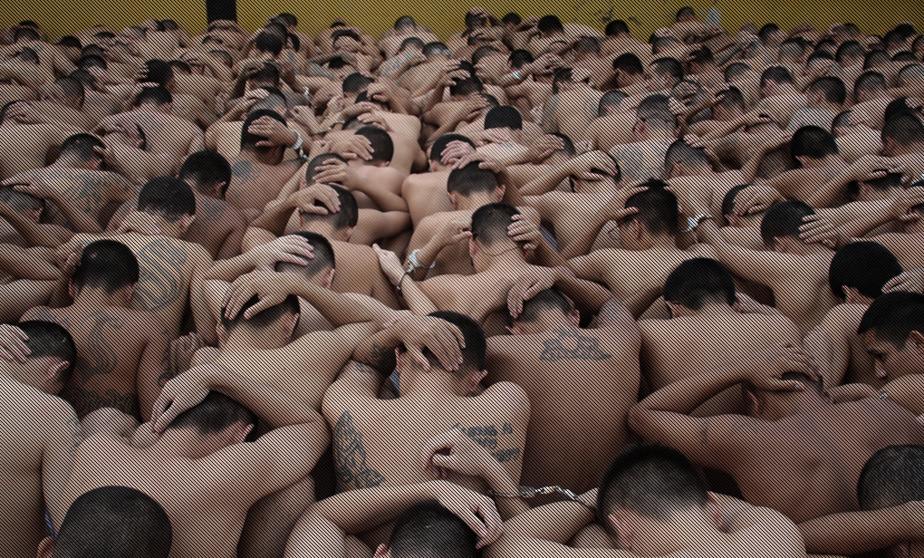 Members of the Mara Salvatrucha (MS-13) and Barrio 18 gangs huddle on top of each other in Ciudad Barrios prison in the north of the country March 28.

Arbitrary arrests have increased in El Salvador since President Nayib Bukele launched a campaign of repression aimed at putting an end to street gangs.

Boys aged 14 and 15 who were playing football in the impoverished Illopango area east of El Salvador’s capital were detained by police in April because of their appearance.

“The officers told the family that the children had big heads and did not provide any additional grounds for their detention. They also specified that they would serve 30 years in prison,” explains Arjun Chauduri, an Amnesty International researcher who recently visited the country.

The case is startling, but nothing particularly original, as arbitrary arrests have been on the rise since President Naib Bukele launched a campaign of repression in the spring to crack down on street gangs that long ago imposed their law on the population.

People get arrested simply because they have tattoos or because a family member was involved with a street gang.

“There is also a lot of evidence that people in urban areas where gangs often operate are being over-harassed,” he adds. 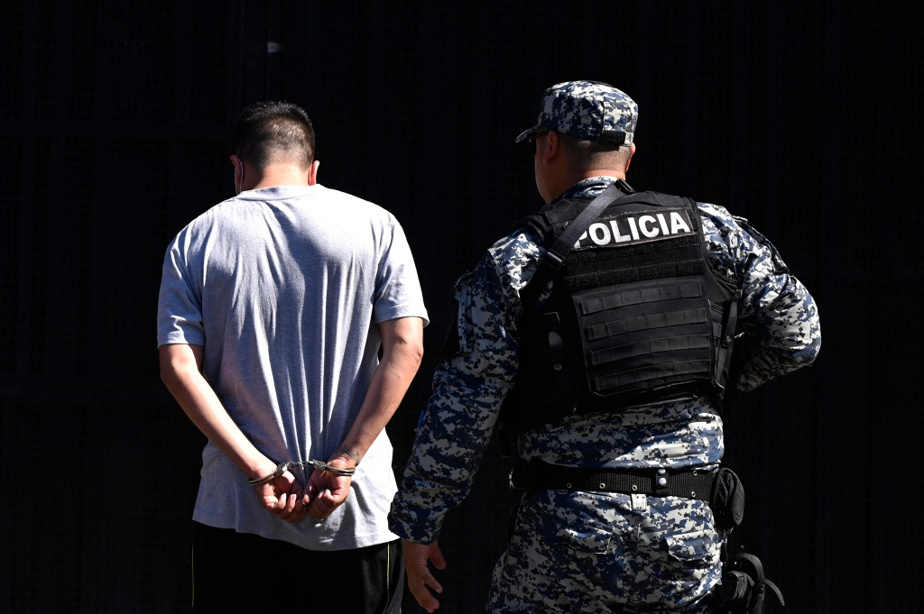 A man is arrested on suspicion of gang ties as a state of emergency is in place in San Salvador, June 22.

The government has declared a state of emergency and stepped up crackdowns across the country after more than 60 people were killed in outbreaks in April.

More than 45,000 people were arrested in four months, says Ruth Eleanor Lopez of the human rights organization Cristosal, who is alarmed that many detainees do not have the opportunity to challenge their detention.

Most, according to her, are accused of links with gangs without access to compromising information. 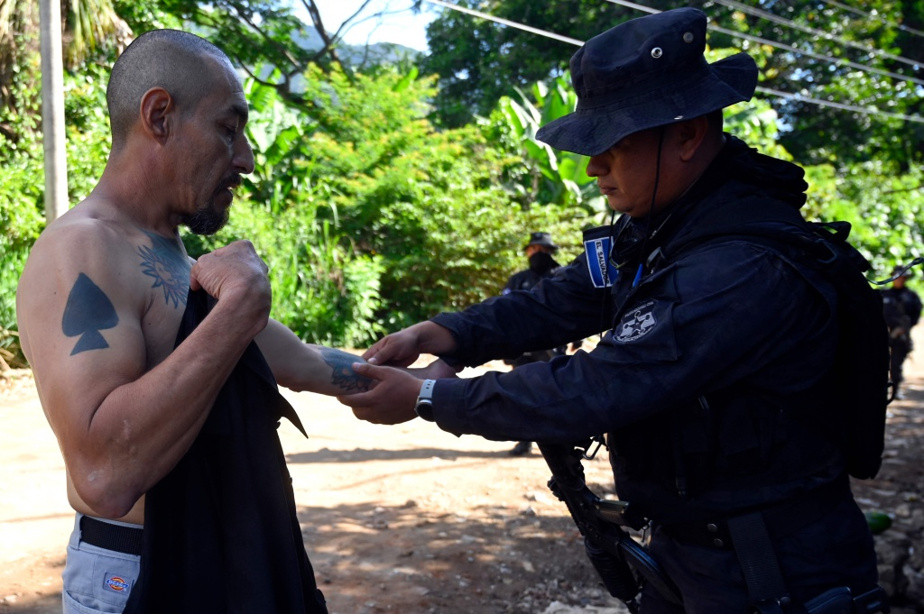 A police officer examines the tattoos of a suspected gang member on June 30.

The authorities’ harsh policies encourage “anonymous denunciations” and create a climate of fear that extends to civil society groups concerned about the regime’s anti-democratic drift.

“If we ask questions, we are told we are gang protectors,” says Ms. Lopez, who accuses President Bukele of using the state of emergency to consolidate his grip on the country and its institutions. 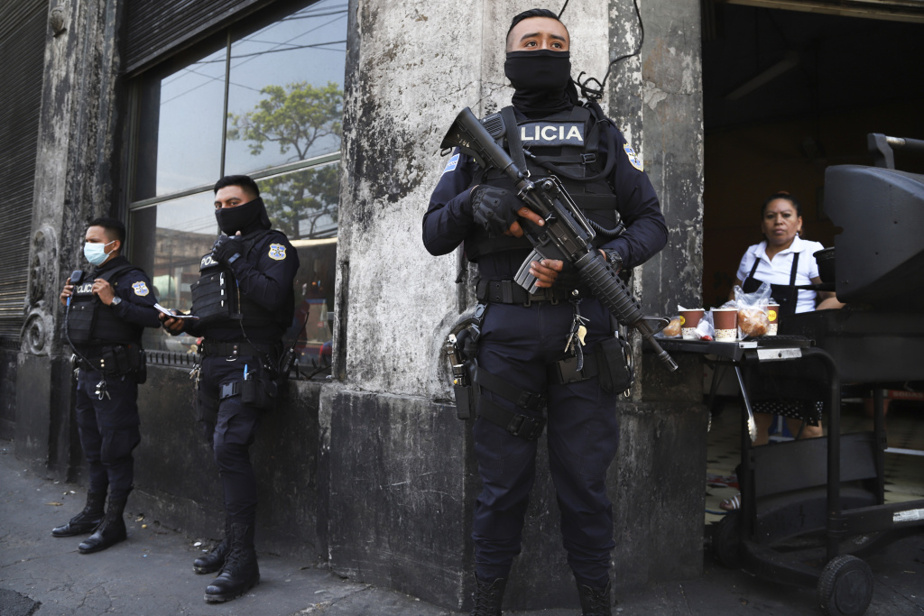 The Salvadoran leader is ignoring these criticisms and is multiplying online posts and full length videos demonstrating his determination to defeat street gangs.

He pledged to campaign against their influence, and since coming to power in June 2019, he has been able to significantly reduce the country’s murder rate, which has long been one of the highest on the planet.

According to the daily newspaper El Faro, the lull was actually the result of informal negotiations held with the leaders of certain gangs, who agreed to remain relatively calm in exchange for certain guarantees, including the protection of powerful members who were the object of American extradition demands. 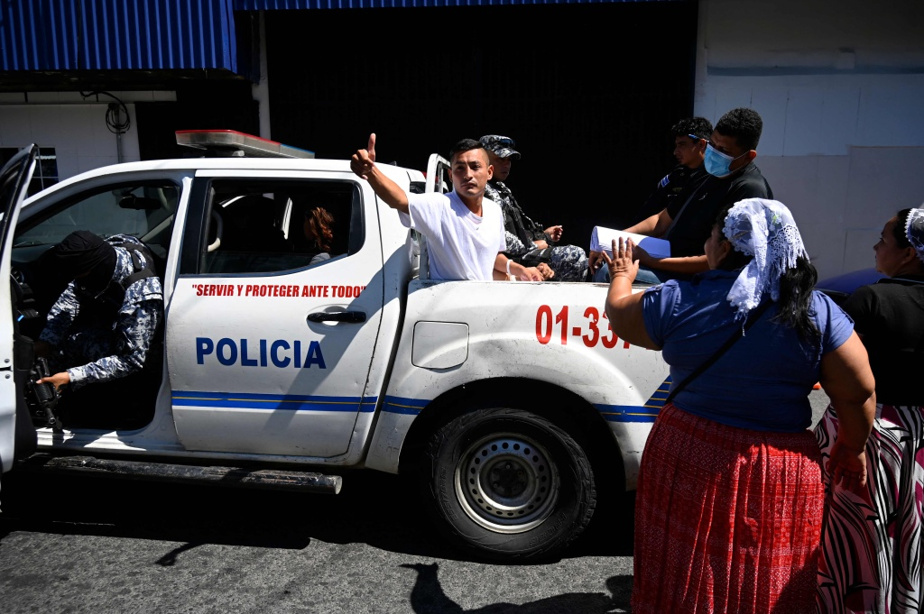 On June 22, the San Salvador police took away several people on charges of gang links. Over 45,000 Salvadorans were arrested in four months.

The outbreak of violence in April was, according to the newspaper, a violation of this tacit agreement, which President Bukele denies.

Rather, the regime attributes its past successes to a “territorial control” plan, the details of which have never been made public.

Despite what human rights organizations say, the government’s current crackdown is supported by a significant portion of the population.

Ms. López partly attributes this enthusiasm to the fact that Salvadorans want to believe that a “messianic” leader can deliver them from banditry. 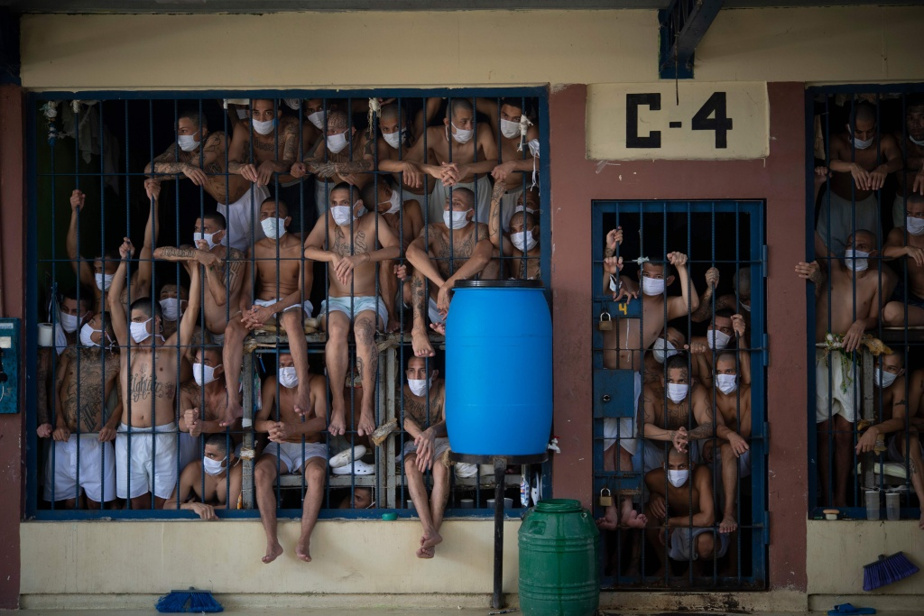 Like the Quezaltepeque prison north of San Salvador, Salvadoran prisons are overcrowded.

Arjun Chaudhuri believes that the use of force is an illusion that does not take into account the socio-economic difficulties that push many young people to crime.

“Other governments have tried this approach in the past and have failed to stop the structural violence affecting El Salvador,” he warns.