When the floods affected Germany and neighboring countries between July 14 and July 17, 2021, more than 180 people lost their lives. Those left behind have not only had to deal with the loss of friends and family, but also enormous damage to virtually everything that has reached the water. In many places, the disaster caused the collapse of all supply networks.

Communication is one of the most important basic needs of modern societies. However, these days in July showed the fragility of the infrastructure used for this purpose: according to Telekom, more than 300 mobile phone base stations broke down during the events; O2 and Vodafone had a similar experience. The flooding of exchanges and the destruction of cable ducts paralyzed communications in many places. At times, more than 1,000 people have disappeared because they could no longer contact family and friends.

News and images of the catastrophic flood must also have reached Hawthorne (California) in the United States, the headquarters of SpaceX and Starlink. Entrepreneur Elon Musk’s satellite internet provider contacted the German Interior Ministry (BMI) shortly after the disaster and offered to help provide internet connections in remote areas via Starlink. The Low Earth Orbit Mass Constellation has been under construction since 2019 and provides high speed, low latency internet access in the triple digit Mbps range.

The BMI transmitted the offer to the staff of the Land Rhineland-Palatinate, who did not hesitate to accept it. According to its press service, the organizing effort was minimal: SpaceX itself was responsible for the rapid delivery of the Starlink satellite modems to Germany. With the help of Tesla, the teams were transported to the emergency forces collection point on the Nürburgring. There, the technicians responsible for Section 6 (ICT, Information and Communication) received their configuration report from Tesla and SpaceX employees.

Nine employees, one from SpaceX and eight from Tesla, participated in the installation. Shortly after 2 a.m. on July 20, the first groups of Starlink emergency personnel and technicians began their journey to the affected areas with posts from Starlink.

Easy to set up

The games provided for the flooded areas are the same that Starlink is currently shipping to beta testers. There is no commercial offer yet. However: a Starlink computer not only comes with all the necessary hardware to connect to the satellite network, but also with a WLAN router. The device features dual-band Wi-Fi 5 with two MIMO streams, including multi-user support. The set also includes a large Power-over-Ethernet adapter (power and network via twisted pair cable) that powers the satellite modem and WLAN router with a maximum power of 180 watts, of which 100 watts maximum for the satellite modem, which has a 30-meter power line. The components are color-coded and already plugged in in the box, so installation errors are virtually impossible. 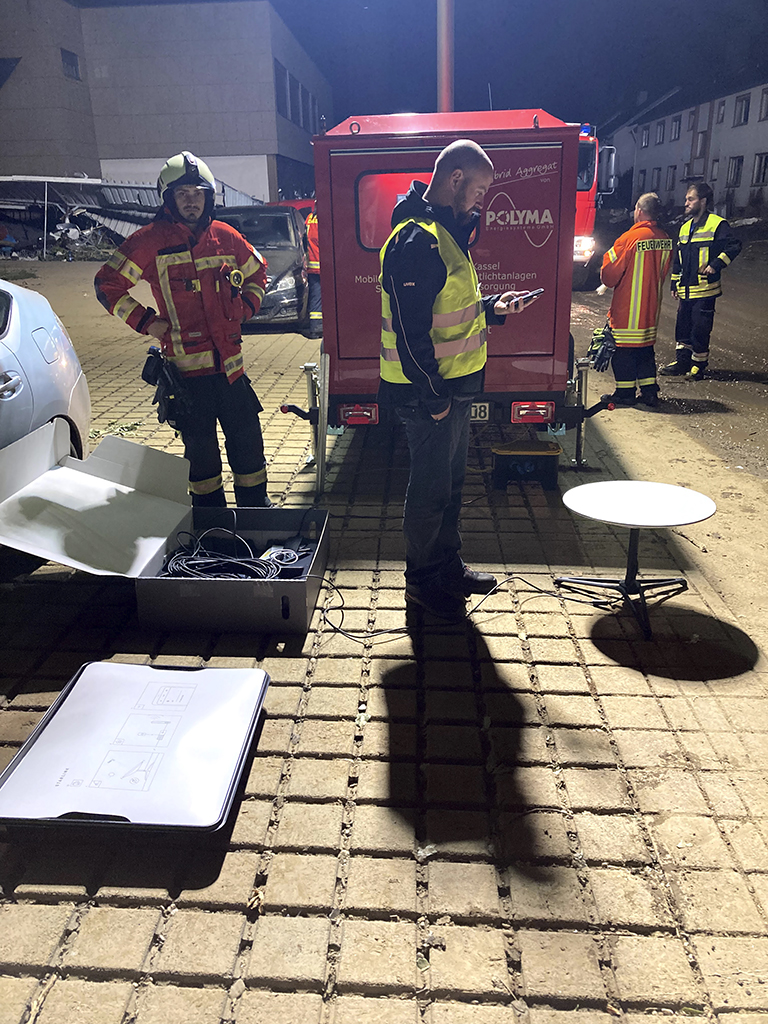 Technicians from Tesla and SpaceX installed the Starlink systems with firefighters and the German Federal Agency for Technical Aid. Some groups were on the road in the middle of the night.

The set-up is done using the Starlink app, which guides the installation process in a few steps and provides connection and quality information directly afterward. c’t was also able to test the configuration on a Starlink assembly; Anyone used to setting up DSL routers may feel unstimulated. Stefan Diehm, a firefighter who accompanied the installation at the site, said in a conversation with c’t that in many cases no more than 30 minutes are required for installation and commissioning. 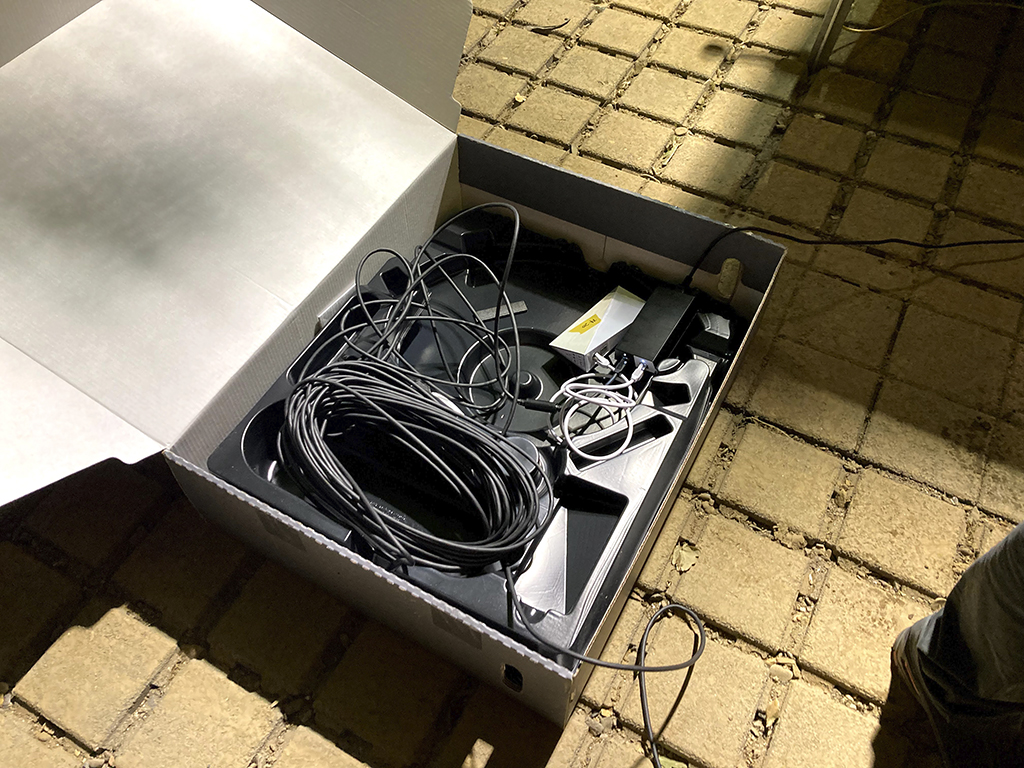 Starlink’s emergency assistance kits were easy to use, coming out of the box with a WLAN router and configured through an app. This means that technicians typically needed less than half an hour per site.

During the first deployment, the groups established 20 Starlink access points in various locations, including Ahrbrück, Ahrweiler, and Liers. Most of the access points have been installed at information points where affected people can obtain help and information.

A prerequisite for installation is always a solid power supply, because Starlink stations consume a lot of power: their consumption is between 60 and 100 watts. To solve this problem, an emergency generator located at the information point was mainly used.

Soon after, 20 more Starlink access points followed. According to the staff press office, Land Rhineland-Palatinate now has 50 Starlink systems, of which 46 are still in operation. They operate in different locations based on demand.

According to the press office, it is mainly victims and helpers who use the Starlink access points. However, they are also used by authorities and organizations responsible for security tasks (BOS) to protect their communication structures. 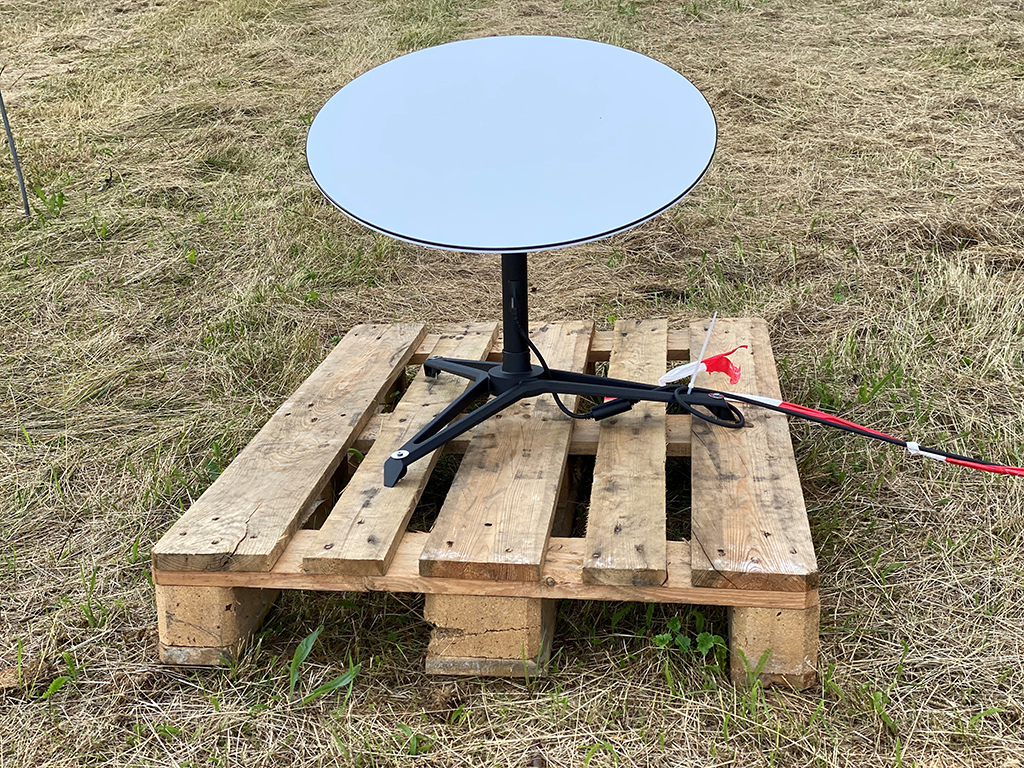 Whether command vehicles or emergency generators: the fully integrated satellite modem aligns your array antenna in phase without user intervention thanks to motors that can tilt and rotate the entire top.

Our contacts at BOS have been positive about the system and how easy it is to configure. The system is suitable, for example, for command vehicles that need low latency for telephony, but would do well not to depend on mobile radio. The critical points were also well received by the population.

The Starlink app integrates all parts of the system, from the installation process to router configuration and connection statistics. This makes it very easy to use.

However, they also mentioned that they did not record the quality of the Starlink connection in detail. The problems and the prostitutes would not be the fault of the provider. The company makes it clear that this is a beta test. Currently, there are already 1,632 Starlink satellites in space. 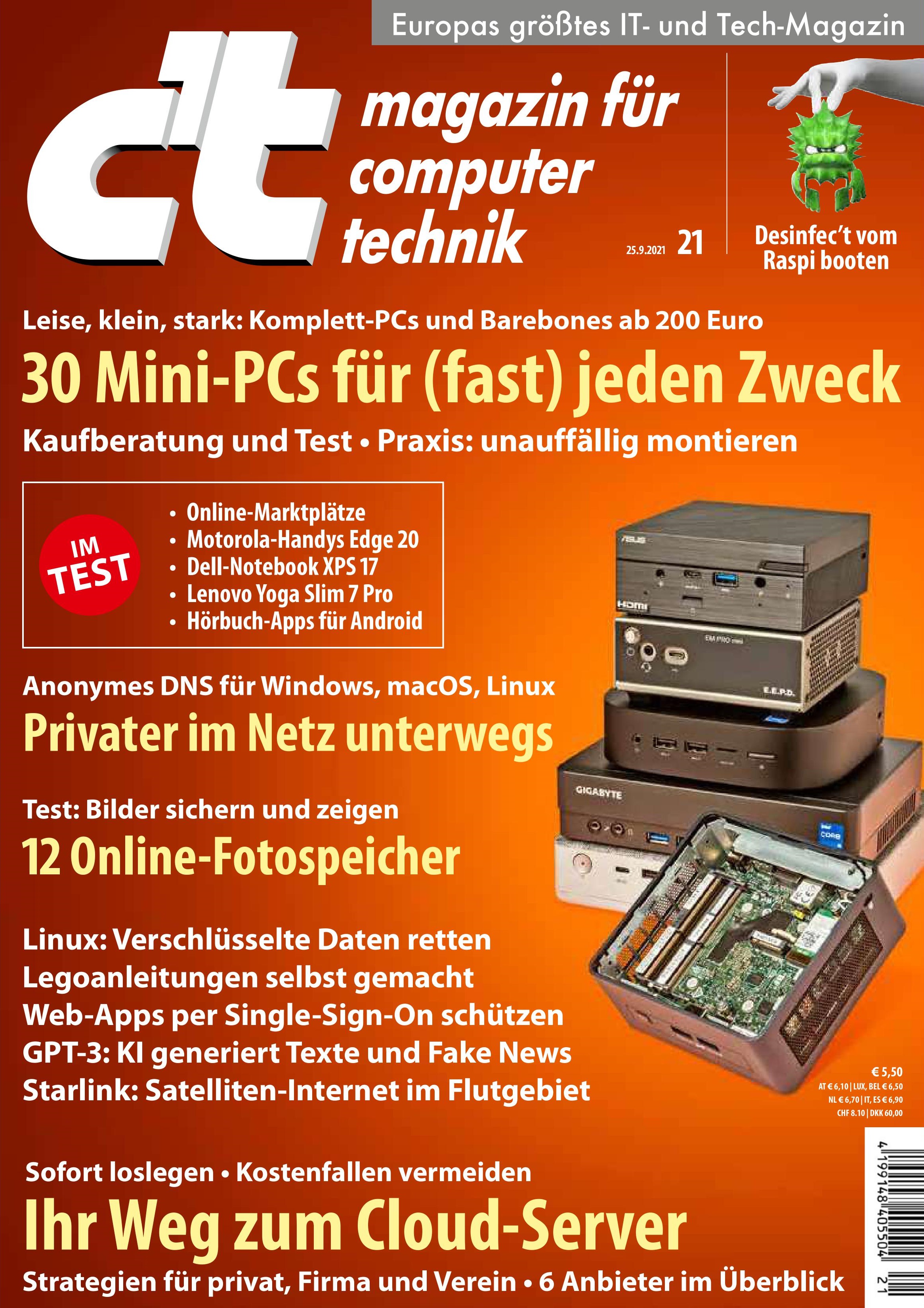 On c’t 21/2021, we take a closer look at mini PCs for (almost) any use. They take up little space and can be mounted discreetly. However, if you want an individual configuration or an upgrade later, you need to buy carefully. Also on the topic: your way to an individual cloud server, online photo storage for Android and iOS under test, and accessibility with Alexa. Issue 21/2021 will be available at the Heise boutique and well-stocked newsstands starting September 24.

At the Arles hospital, the medical interim, a vital emergency – Sciences et Avenir

At the Arles hospital, the medical interim, a vital emergency – Sciences et Avenir