When millennia-old dust hides treasures in polychrome… Cleaning the frescoes of the Temple of Esna, a long-abandoned religious building located on the west bank of the Nile, 60 km south of the ancient Theban capital, present-day Luxor, Egypt, has revealed original decorations of deities with outstretched wings located in two rows along the central axis of its ceiling.

“Before and after”: a fragment of the ceiling of the ancient temple of Esna and his deity with outstretched wings in the process of being cleaned. Credits: Ahmed Emam/MoTA

This monument was dedicated to the cult of Khnum, the ram-headed Egyptian god, also known as the Lord of Fresh Water. The construction of the naos, the main part of the sanctuary, which has now disappeared, began around 170-164 BC. BC, under the joint rule of Ptolemies VI and VIII, in other words, during the period of the Lagids, the period of the Hellenistic dynasties of Egypt. . 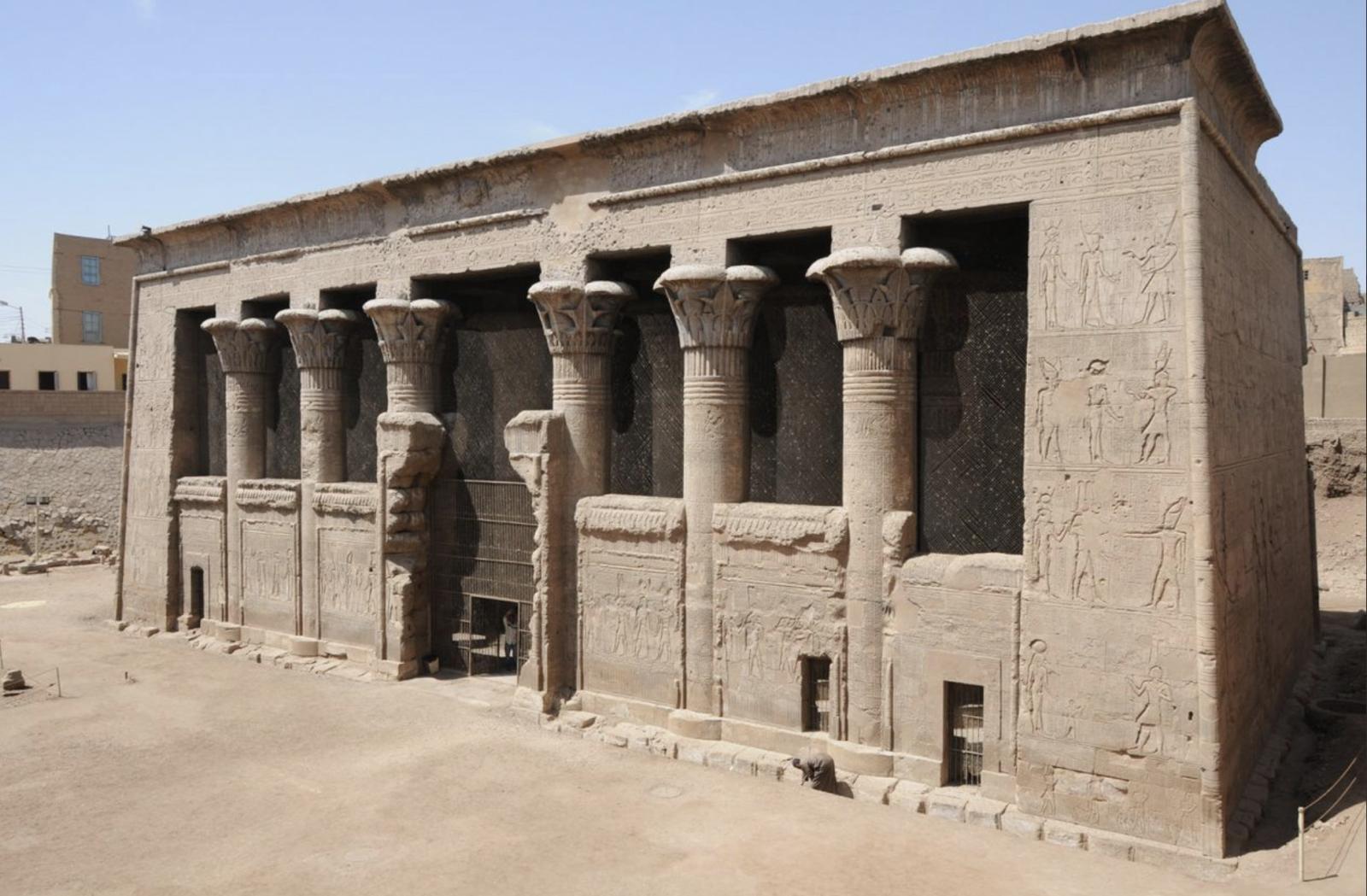 Facade of the pronaos of the temple dedicated to Khnum in Esna, Egypt. Credits: MoTA

And it was in the vestibule (pronaos) of the original architectural complex, the only one that has survived for centuries, that discoveries were made. “We found 46 images of deities on the central part of the restored ceiling. 24 with the head of Nekhbet, a vulture goddess wearing a white protective crown of Upper Egypt, and 22 others featuring Wadjet, a cobra-headed goddess from Lower Egypt,” explains Daniel von Recklinghausen, an archaeologist from the University of Tübingen (Germany), joined by Science et Avenir. The researcher has been studying the site since 2018 with Christian Leitz in collaboration with a department of the Egyptian Antiquities Ministry in Cairo and Drs. Hisham El-Leity and Mustafa Ahmed. 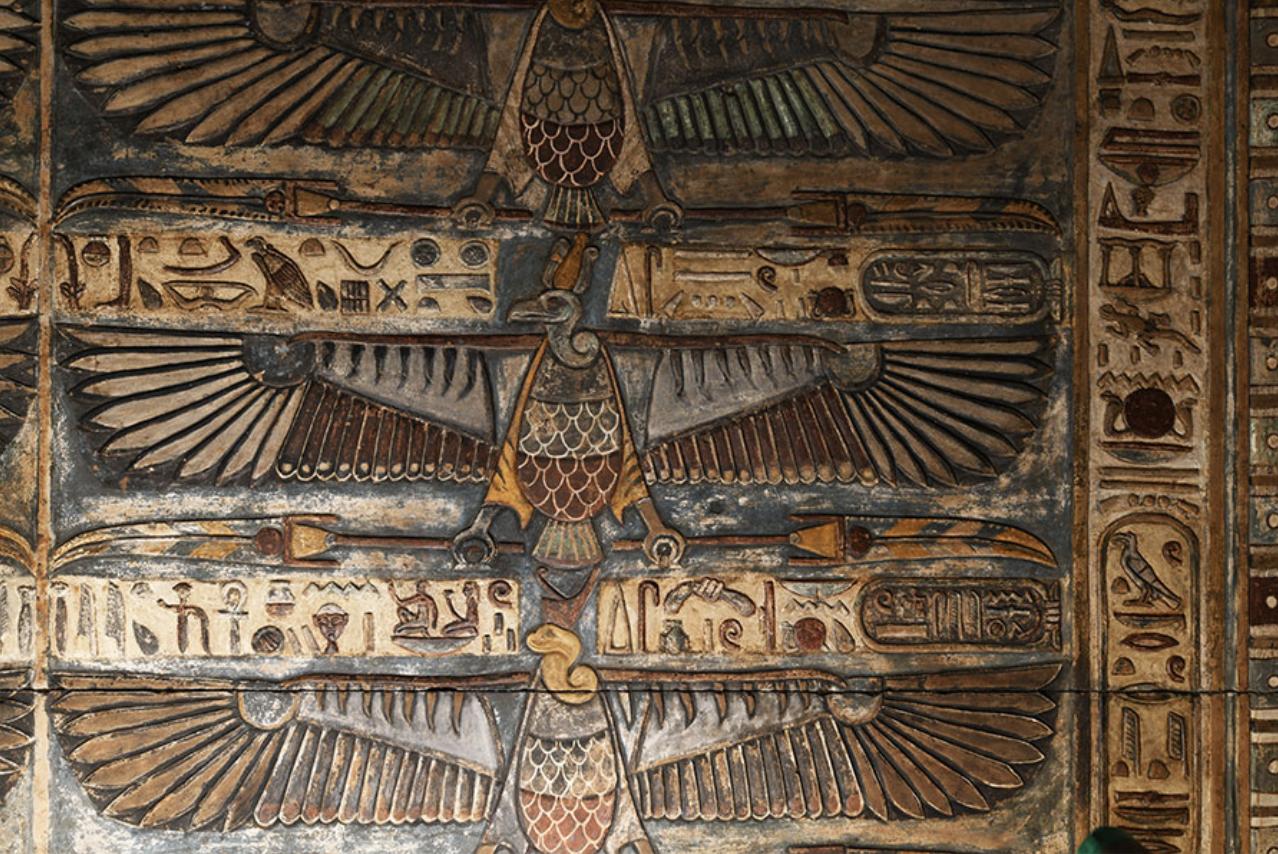 It is considered one of the last surviving examples of Egyptian religious architecture from the Greco-Roman period (332 BC – 350 AD), like the temples of Philae, Kom Ombo, Edfu, Athribis or Denderach, relative to the site of Esna, of old Iounitus and Latopolis, which are sometimes visited by passionate tourists, the German Egyptologist clarified “that the construction of the pronaos, an element of the Roman period in which the paintings are restored, probably dates back to the reign of Tiberius (14-37 AD), although we cannot rule out the possibility that it could have been built under Claudius (42-54 AD).” The Roman influence is reminiscent of certain decorations adorning the capitals of the 18 columns that support the roof, with their motifs of palm leaves, papyrus, lotus buds and especially bunches of grapes. Decorative work that continued until the middle of the 3rd century AD. 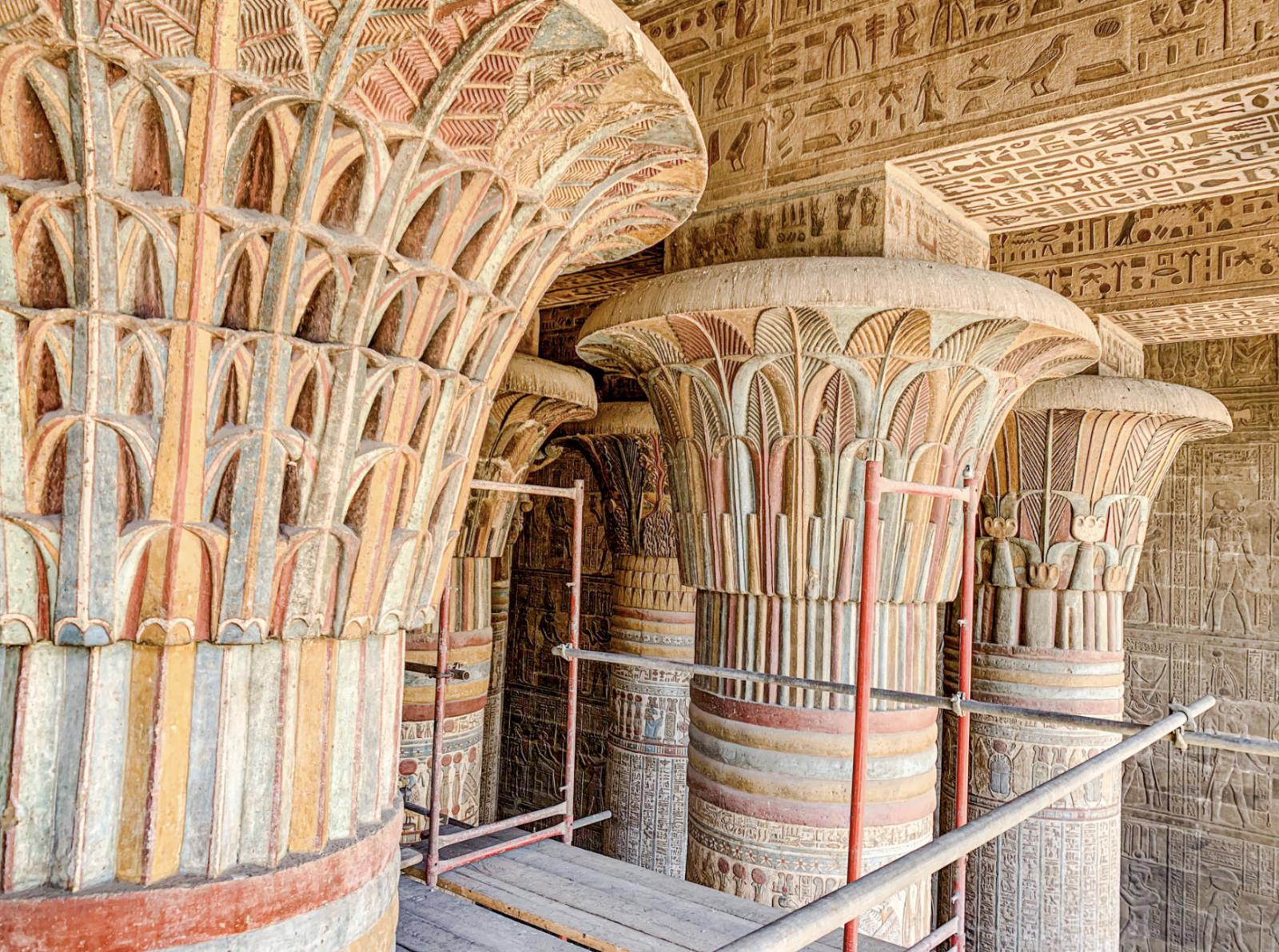 At a height of 15 m, the colored capitals of the pronaos columns (hypostyle hall) during restoration. Credits: MoTA

The discovery of these frescoes depicting deities, however, did not come as a surprise to experts. “In Egyptian temples, these images were often painted with bright colors that faded over time,” explains Christian Leitz. So in Esna, after 2000 years of oblivion, the original shimmering and bright colors disappeared under a dark layer of earth and soot. According to the beliefs of the ancient Egyptians, the colors really had to create the appearance of life, symbolically enlivening the jewelry. 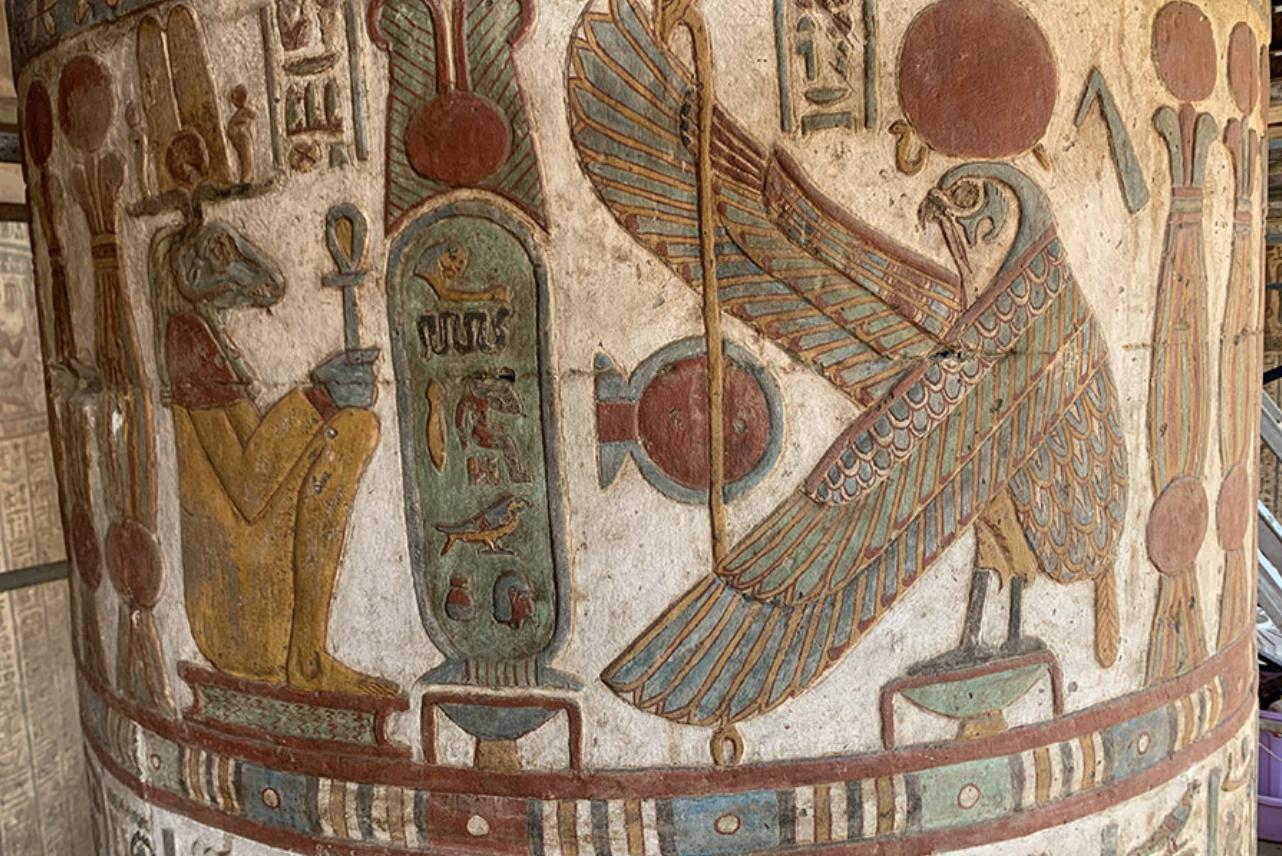 On the top of the restored column is a cartouche of Emperor Hadrian (117-138), depicted under the protection of the god Khnum. Credits: MoTA

Although the religious complex of Esna was studied in 1963-1975 by the former director of the French Archaeological Institute in Cairo (IFAO), Egyptologist Serge Soneron, who died suddenly in a car accident in 1976, the colorful decorative elements of the Khnum temple ceiling were never seen in all their splendor before this restoration. 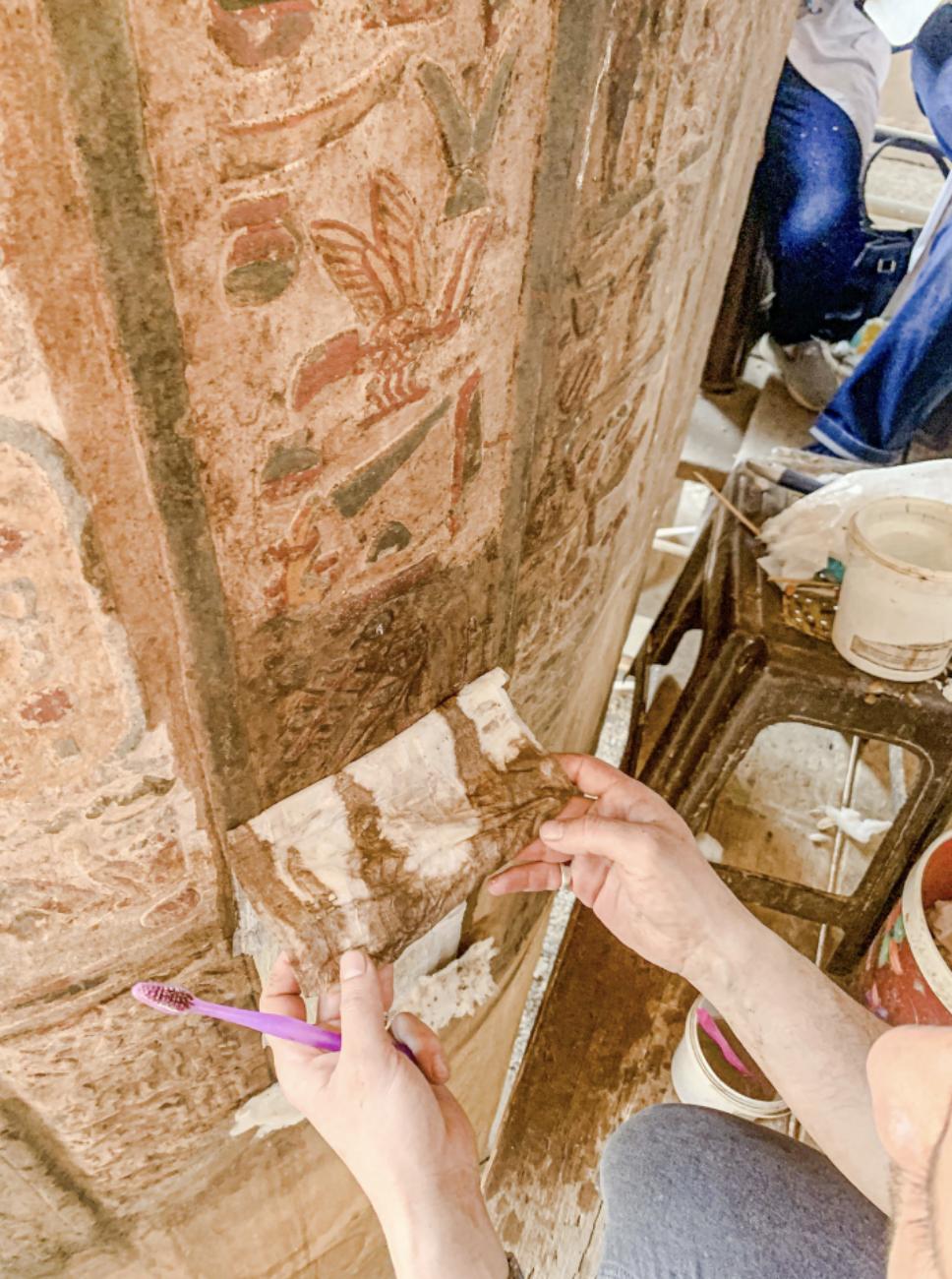 Column cleaning phase with the appearance of the original colors after processing. Credits: MoTA

This unfinished work also made it possible to identify in the astronomical part of the ceiling descriptions of the constellations Ursa Major (Meskhtiu) and Orion (Sakh), as well as other completely unknown ones. Ahmed Imam, the head of the restoration team, said that he thus unearthed a Greek inscription in red ink, which, according to the Ptolemaic calendar, is the 5th day of the month of Epiphi, a date that can be associated with the reign of the Roman emperor. Domitian (81-96 AD). “Since this seems to be an inscription commemorating the death of this emperor, we are waiting for the completion of the restoration of this part of the temple in order to find out the full transcript,” Daniel von Recklinghausen added. 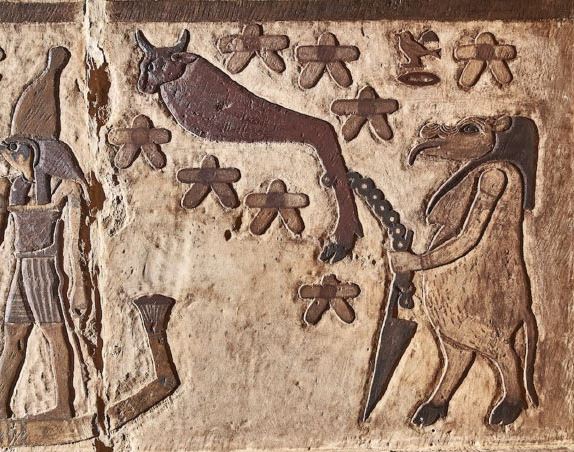 Subpolar constellation Ursa Major in the form of a bull’s paw. Seven stars are attached to a pillar held by a goddess with the body of a hippopotamus. Credits: Ahmed Amin/MoTA

In the 19th century, under the rule of Ali Pasha (1805-1840), surrounded by the effects of urbanization, the remains of a temple in the small agricultural town of Esna served as a warehouse for storing cotton bales. Today he finds the protection of the winged deities.