The cloud is the new curse of decentralization. The decentralization of the blockchain network depends on the number of its constituent nodes. However, the location and hosting infrastructure of these nodes also play a role. Unfortunately, they tend to be dangerously centralized on cloud hosts, which creates a potential vulnerability. This is especially true for Ethereum.

With over 4200 nodes, Ethereum is one of the most decentralized blockchain networks in the industry. However, when looking at these data in detail, the dependence on Amazon and other cloud services becomes clear.

Thus, 65.3% of all nodes in the Ethereum network are hosted on centralized hostings. Only 32% of nodes are hosted by individuals on a local server.

More worryingly, among the 65% of nodes hosted by professional hosts, 51% use AWS, Amazon’s cloud service.

Distribution of Ethereum nodes by hosts.

Moreover, the latter are also not very decentralized geographically. Indeed, 46% of nodes are hosted in the US, followed by Germany and Singapore with 13% and 4% of nodes, respectively.

An alarming situation as it opens up a central point of failure in the Ethereum network. So if a country like the United States wants to attack the network, it can put pressure on Amazon to ban nodes on AWS.

Therefore, on Thursday, the Messari teams announced that it is important for “cryptocurrency to decentralize.”

Clearly, Ethereum is not the only network facing this issue. The Solana blockchain is also primarily hosted by large cloud companies. 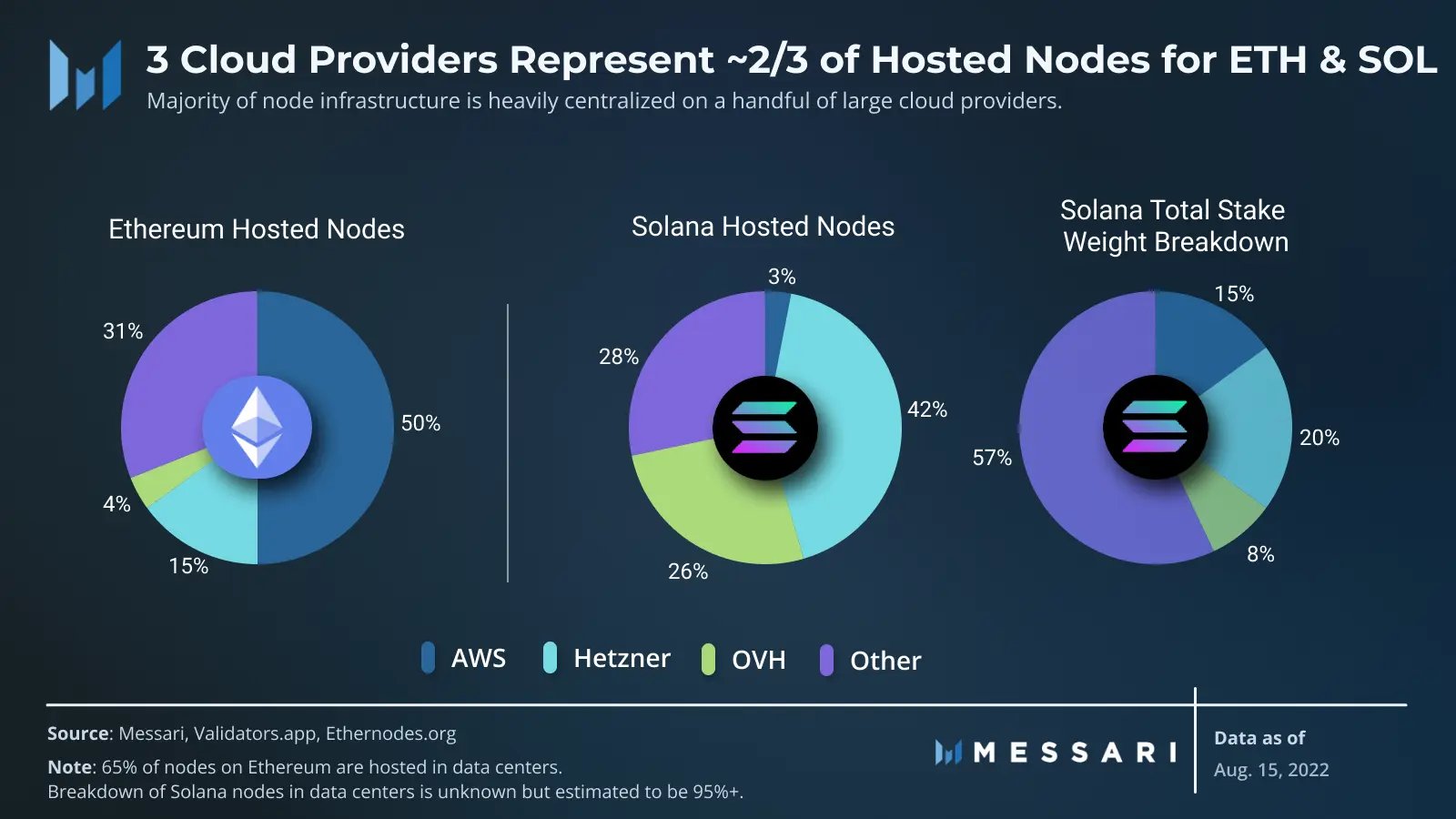 Beyond the blockchain ecosystem, these hosting services, Amazon in particular, have managed to become indispensable. It is also one of the company’s most profitable activities.

Indeed, the latter facilitate application deployment while offering attractive operating costs. As such, many developers choose this solution, which is often less tedious and costly than hosting the node yourself.

This situation was already noted in 2020 by Messari in their report on Ethereum 2.0:

With the transition to Proof of Stake, the number of nodes in Ethereum should increase dramatically. We hope that service providers and validator node hosts consider node decentralization in their infrastructures.

According to the latest estimates, the transition to Proof of Stake could take place on September 15th. However, the specter of a fork preserving Proof of Work is beginning to emerge.

Merger, Ethereum’s big upgrade is just around the corner. Take the lead and start accumulating and trading your first Ether by registering on the FTX reference platform and enjoy a lifetime discount on trading fees (commercial link).