Ethereum hit a new three-week high in early trading on Saturday, but the gains were off during the day. The token continues to trade above $1,700 as market sentiment remains bullish. Bitcoin had a similar day, with the token slowly losing momentum after failing to clear a key resistance level.

The decline came as the token failed to clear the $21,600 resistance point as the bears struggled with the move.

Looking at the chart, the decline comes as the 14-day Relative Strength Index (RSI) seems to be hitting a net resistance level at 55.40.

At the time of this writing, Bitcoin is trading at $21,356.34 as momentum slowly returns. However, until the RSI breaks the aforementioned limit, we will not see further growth.

Also, the 10-day moving average (red) is now about to cross its 25-day counterpart (blue). This could be another catalyst for further price growth.

Ethereum was basically ready for the start of the weekend as the token broke its own resistance level. On Saturday, the second largest token in the world hit a high of $1,739.43. This happened when prices broke through the highs of $1,700.

There were some declines from the previous high. ETH is currently trading at $1,721.15. 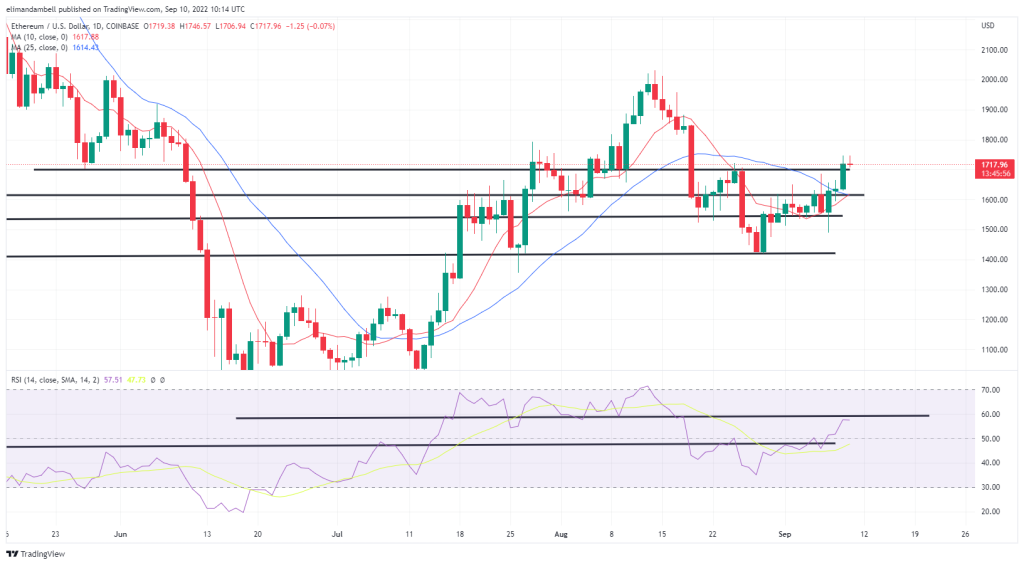 As with bitcoin, it looks like the bulls have decided to close previous positions and take profits as market uncertainty grows. The chart shows that the 14-day RSI has played its part in this volatility, with the index holding at 58.00, close to a high of 60.00.

The bulls are still targeting $1,800, but to get to that point, price strength needs to overcome the next hurdle.

To display Hide table of contents