If one of your neighbors has ever “spoiled” you a goal by screaming in front of a football game seconds before the images hit your TV, you have probably wondered where the lag is coming from. This latency which can sometimes literally ruin your evenings with friends has different origins and depends on many factors, the main ones being the chosen source (TNT, Box, mobile applications, etc.) and the quality of the video stream.

As Euro 2021 football has just started, we have decided to explore this phenomenon in order to better understand it and above all to allow you to obtain the lowest possible latency.

TNT VS Box VS Internet and applications

We started by comparing the difference between the main sources, taking as a reference the TF1 channel which will broadcast part of the Euro matches (click here to find out where all the matches are broadcast). Obviously, the ranking that you will see is not exhaustive but know that we will expand it in the coming days by adding other sources and the Bein Sports channel which broadcasts the entire competition. 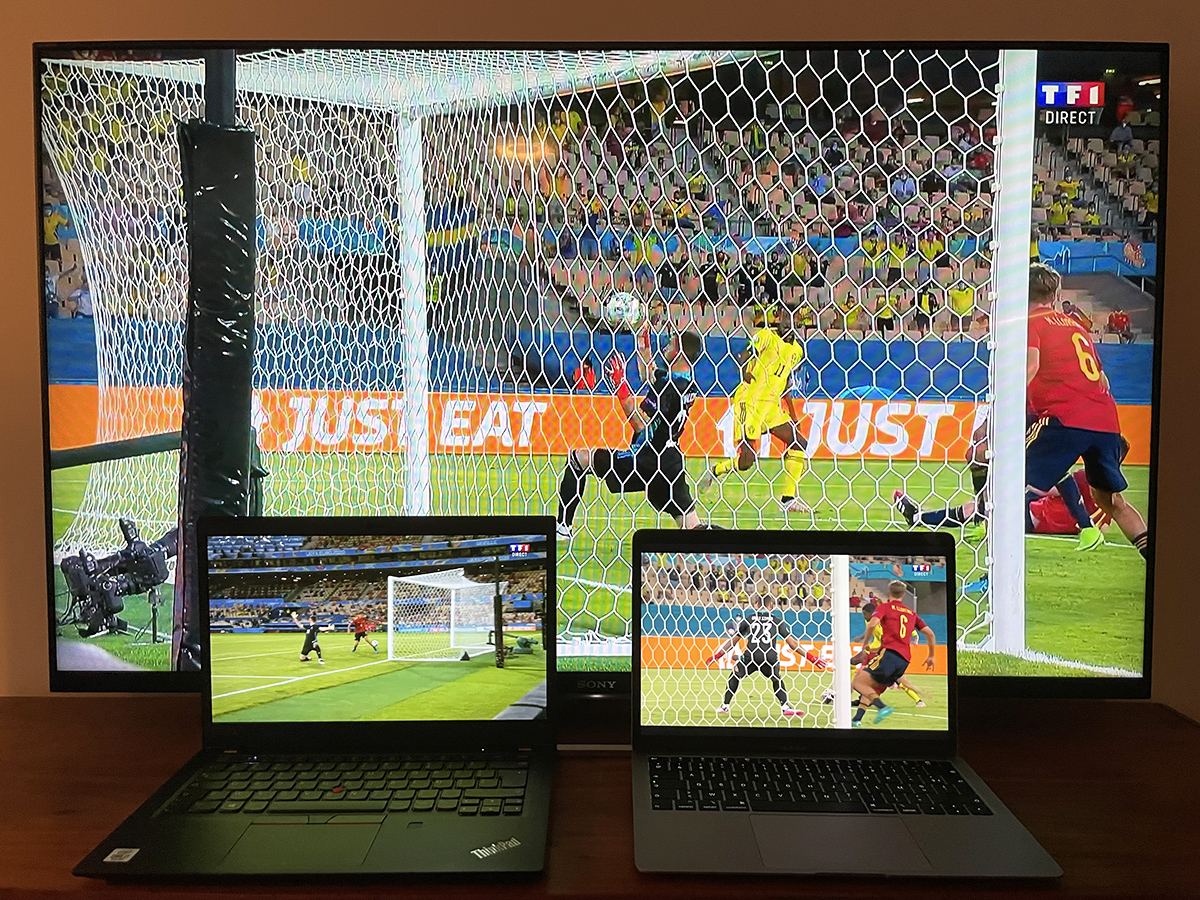 You might as well say it straight away, TNT is the source that will induce the least latency but you should know that it does not necessarily correspond to the real direct. There is actually a small delay of up to 2 seconds between the actual action and the reception of the images in the control rooms of the channels. Then a new latency is added on the rest of the way to your TV depending on the broadcast channel chosen. It is the latter that we are measuring here.

If it appears that TNT is indeed the most responsive source, note that the latency can vary significantly at home depending on a multitude of criteria such as the quality of your antenna or your Internet connection (ADSL will not be not as efficient as fiber for example) or the definition of the stream (SD, HD, 4K). Indeed, a 4K stream requires longer encoding.

Each operator also re-encodes the video signal with its own technology in order to adapt the stream to its broadcasting platform. This processing will induce more or less latency depending on the parameters chosen by the operator, which means that you will not necessarily obtain the same result with an SFR, Orange or Bouygues box as with our Freebox Mini 4K.

From the stadium to your TV

In order to better understand the origins of the gap between the real action of the match and its arrival on your television, it is important to know the distance traveled by the images from the video capture to the stadium.

This year, Euro football is taking place in several countries to celebrate the 60 years of the competition, but the images captured in the stadiums by UEFA cameras are all sent by optical fiber to the Netherlands, to a IBC (International Broadcast Center), a center not far from Amsterdam which then distributes the video streams to the various European TV channels. 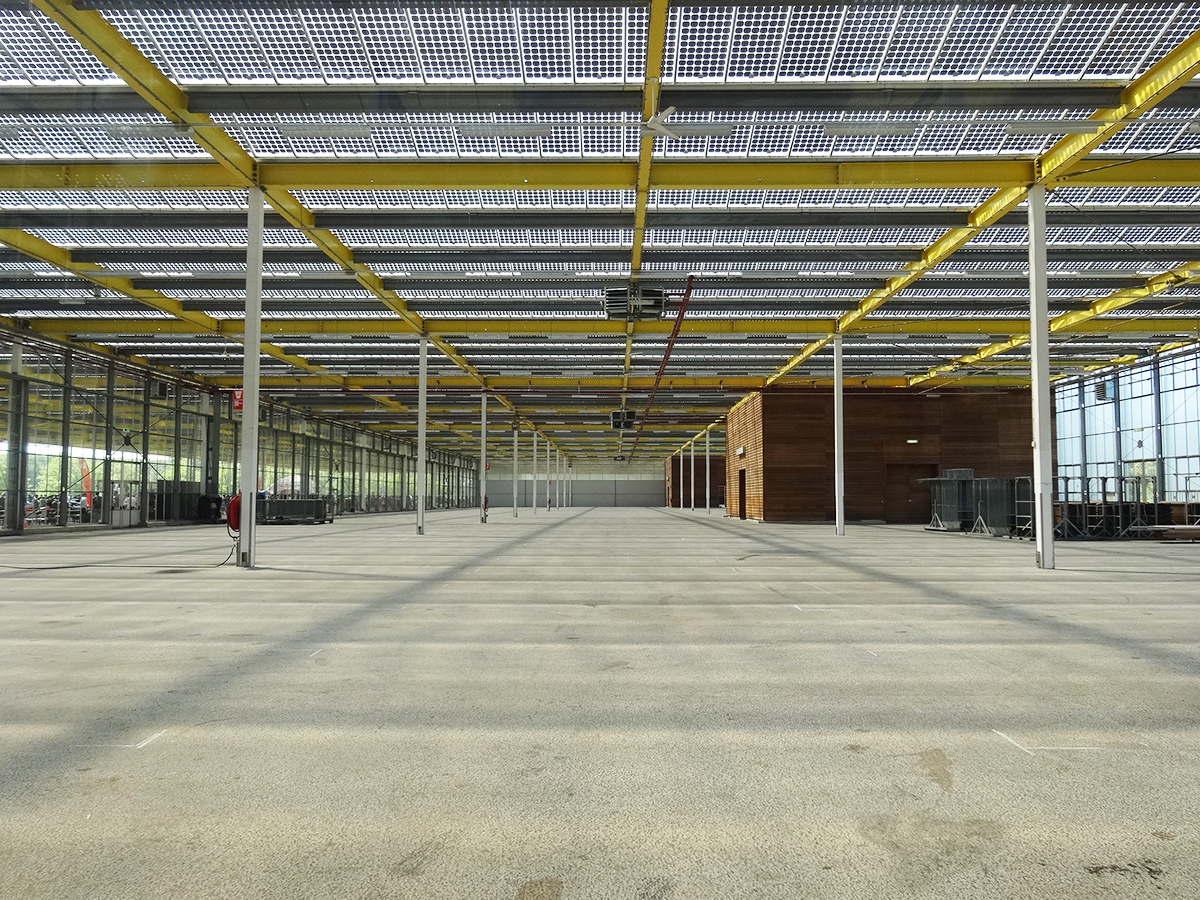 The Haarlemmermeer Expo, near Amsterdam, the place chosen to install the Euro IBC – Image credit: harry_nl via flickr

In the case of TF1, Yves Davot, Head of Advanced TV Technologies and Sports Operations of the channel, explains that the procedure “is less than 1/2 second, the exact value depending on the distance, the number of network interconnections on the route and the intrinsic security of UEFA’s production”.

In fact, to guarantee good signal transmission, UEFA will, in addition to fiber, provide “one or more satellite transmissions, which can accumulate a delay of up to about 2 seconds. Depending on the level of security desired, each channel can choose to align its reception with the most delayed signal”. This explains the differences between TV channels.

Towards a revenge of the web?

On its way to your television, the video signal thus undergoes several treatments which delay it. According to the channels, the operators, the mode of diffusion and the quality of image, the shift turns out to be very different, giving for the moment the advantage to the TNT.

But new technologies may reshuffle the cards in the future. Apple, for example, is developing Low-Latency HLS technology, announced at its WWDC 2019 conference. According to the firm, this evolution of the HTTP Live Streaming protocol could make it possible to reduce the gap between reality and live broadcasting via web services (such as MyTF1 or Molotov, mentioned above) at only 2 seconds against several dozen today.

In theory, this technology could then prove to be more efficient than DTT. A great promise, but in the meantime, we still advise you to connect to your aerial socket if you have poor insulation and a noisy neighbor. And if you have problems with your installation it’s here:

Also, don’t hesitate to read our other Euro 2021 guides: