Torrential rains hit the small village of Panjal Sheikh in southern Pakistan, one after the other, destroying its houses and flooding the vast agricultural land around it, throwing its inhabitants into despair.

After two weeks of incessant rain, there was nothing left but damaged walls and a pile of personal belongings floating in puddles of brownish water and gray mud.

Residents of Panjal Sheikh, located less than 25 kilometers from the banks of the mighty Indus River, which crosses the country from north to south, were hit hard by monsoonal weather that covered a third of the country.

The worst episode the country has ever known in thirty years, given the damage done, the floods have affected tens of millions of Pakistanis, killing more than 1,000 of them and destroying nearly a million homes since June, according to authorities.

“When it started to rain, everything around started to collapse,” one of its residents, Mukhtiar Ahmed, told AFP on Sunday.

“We rushed to try to save the children in a collapsing house, when another house collapsed in turn, then another,” he said. “The whole village was destroyed.”

Pakistan regularly suffers from heavy rains during the rainy season, which usually starts in June and ends in September. Often destructive, they are also needed to irrigate crops and replenish water resources.

But the extent of the damage seen this year is unheard of in thirty years, Prime Minister Shahbaz Sharif insisted.

Pakistani authorities blame climate change for increasing the frequency and intensity of extreme weather events around the world.

The ruthlessness with which the storm hit the area surprised the headman of the village of Panjal, Sheikh Ghulam Rasul, 80 years old.

“All of a sudden we heard a big noise and didn’t immediately understand what was going on,” said the old man, who believed his son’s house had collapsed and four of its tenants had died. It was actually the sound of water pouring down. 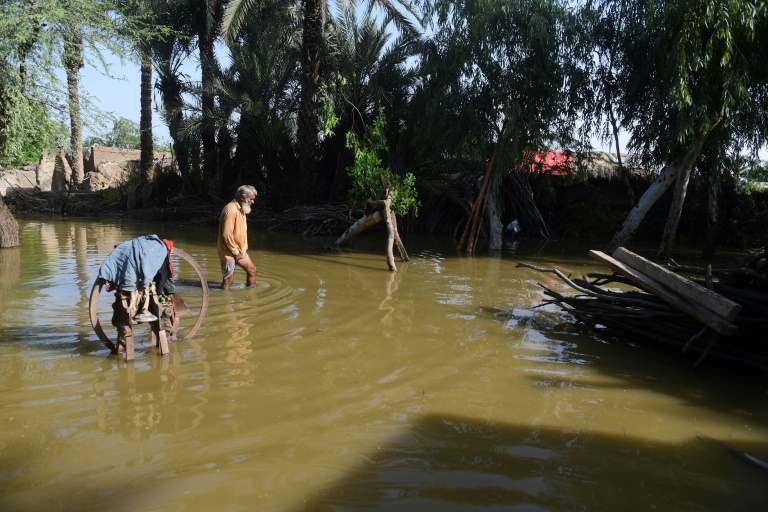 He was not at the end of his surprises. While the family tried in vain to prevent water from encroaching on their land, Mr. Rasool gave birth to a daughter.

In the pouring rain, her family finally managed to take her to a poorly maintained hospital, where she gave birth by caesarean section. But his trials did not stop when he returned home.

“I was half asleep in my room … when we felt the room was rocking,” she told AFP. “I ran outside with my daughter in my arms as the walls came down as we were leaving.”

After thirteen days of rain, Mr. Rasool examined what was left, stumbling over piles of straw, family items, and piles of firewood, the sale of which allowed him to make ends meet.

The man undertook to bring down the fragile walls still standing so that they would not fall on passers-by. “Everything is destroyed. We can’t even cook,” he complained. “We’re in a lot of pain and we’re waiting for someone to help us.”

Many flood survivors, such as those in Panjal Sheikh, traveled to the nearby larger city of Sukkur in the hope of getting help. Some took shelter in rough plastic tents along the overpass.

When two army trucks with food, sacks of wheat, tents and bowls passed, the crowd rushed in their direction. Some desperately tried to climb into the trucks, struggling to reach their cargo. Soldiers yelled at them to line up, but few listened.