The launch event for the new Pixels has just ended. Google introduced the Pixel 6 and Pixel 6 Pro there, along with its first internal processor, the Google Tensor. Both smartphones will be equipped with Android 12. Therefore, we could have expected Google to say more about the new version of its mobile operating system during the event. But it was not.

The official announcement of the Android 12 launch did not take place during the event, and Google preferred to quietly publish a blog post on the sidelines of the event, indicating the availability of the new Android for Pixel phones (from Pixel 3) and summarizing its main ones. features.

Android 12 has many new features and possibly the biggest redesign of the Android interface since its debut. Privacy is increasingly important, with several new features, including a dashboard that shows a timeline of the apps that access your private information.

If you have a compatible Pixel phone, you can download and install Android 12 right now.

As a reminder, since the release of Android 10 in 2019, Google has ditched the topic of delicacies to name its Android versions, betting all on the numbers. Last year it was Android 11. Android 12 will be the name of this new version.

But habits are not easily forgotten … and we know that dessert names are still used internally, as code names, to name Android versions. Thanks to the XDA developers, who shared a lot of information about the OS update, we know that internally this version is called “Snow Cone” (“granite” in French).

Your release date (on Pixel)

When the beta version is released, all Android users with a compatible phone can sign up and try the new Android, and help Google improve it before its public release.

The official version of Android usually launches in late summer. Therefore, developers have time to prepare their applications for the new APIs, and Google has finalized its new version of the operating system, in particular, correcting the bugs reported by beta testers.

Last year, Android 11 was released on September 8. This year, however, Android 12 was only released on October 19, when the new Pixel 6 and Pixel 6 Pro were announced.

Android 12 incorporates many new features, including:

A redesign of the interface 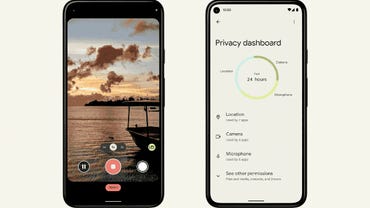 Google has taken a step back and completely redesigned much of the look and feel of Android.

For example, the new “Material You” feature takes colors from the phone’s wallpaper to customize the look of the system, including the notification screen, the quick settings menu, the new look of widgets, and more. This feature will be released exclusively on Google Pixel phones, but one can imagine that it will eventually roll out to all Android devices.

The notification shade and quick settings menu have a new look, in addition to the color matching feature. The configuration buttons are larger, easier to read, and appear easier to navigate. Notifications also take on a new look, and grouping and interaction take on a playful feel.

To access the Google Assistant, you no longer need to drag your cursor up from the corner of your phone screen; Now you just need to press and hold the power button to activate the personal assistant.

When it comes to privacy settings, Google is serious about helping Android users keep their personal information to themselves.

A new location sharing option allows an application to only provide general location information to an application, rather than the exact location. For example, if you use a store app for a general search, it will ask for your location. However, does this store really need to know where your home or workplace is? Probably not. Instead, you can ask Android 12 to indicate your general location, for example, which is south of the city.

Another novelty in terms of privacy protection: your Android smartphone will now notify you when an application is using your camera or microphone. To do this, colored dots will be displayed at the top of the screen, like those that already exist on the iPhone. If you see one of these colored dots, you can swipe down from the top of the screen to open the quick settings panel and thereby disable access to the camera or microphone for a specific app.

For even greater control of your personal information, a new privacy panel will show you, for each category of personal data, which applications are accessing and the exact times they were accessed. With this information, you can restrict access to applications that you consider too intrusive.

With Android 12, scrolling screenshots are also possible. This feature is useful if you want to take a screenshot of a very long web page or conversation. Now just a few buttons are enough.

Another new feature is the autorotation function. Google now uses the Android device’s front camera and adjusts the screen rotation to fit your face. In other words, you will soon be able to lie on your bed and use your phone without switching to landscape mode.

Your availability (on other Android devices)

When will Android 12 be available for smartphones that are not part of the Pixel range? That’s a great question … no answer yet.

Newer versions of Android are always available on Pixel devices first, before rolling out to non-Google devices. But the availability date depends on the manufacturer of your device. It has happened that some brands, such as Motorola and OnePlus, released a new version of Android a day or two after its launch.

But it also often happens that companies like Samsung release the new version of Android one or more months after its release. As an example, OneUI 4, Samsung’s next big update that includes Android 12, is currently in beta for the Galaxy S21. Which means it could be released before the end of the year for that specific device.