“I have always wanted the Arab World Institute to be open to all heritages, beliefs, religions and cultures,” said Jack Lang, its president. Thus, deployed in two sets and more than 1000m2, about 280 pieces collected around the world are offered to help discover the history of the Jews of the East, from the banks of the Euphrates to the plateaus of the Atlas. An existence and roots presented for the long term, as the historian Benjamin Stora, its general curator, wished: “This exhibition in the heart of Paris is also a way of trying to preserve a treasure of memory that will disappear.”

Eugène Delacroix’s trips to Morocco and Algeria in 1832, followed by that of Théodore Chassériau in 1846 in Constantine, mark the beginning of an interest of European painters and photographers in the Jews of the East, thus joining the Orientalist artistic movement. Credit: IMA

The Jewish Arab tribes of the Hejaz oases

From the Jewish tribes of the Arabian Peninsula to the emergence of the Jewish urban centers in the Maghreb, in the Ottoman Empire, passing through the figures of the scholars of this community in Baghdad, Fez or Córdoba, the Institut du Monde Arabe de Paris, a geography as well as a chronological route to publicize the history of Jewish settlements in the Arab world and around the Mediterranean. Starting with the most ancient periods with rare papyri, emanating from a Jewish presence in Egypt from the 5th century BC. C. JC, the visitor follows in the footsteps of the Jewish Arab tribes of the oases of Hedjaz, in Arabia, through paintings, exceptional manuscripts, textiles, liturgical documents, secular or religious witnesses of this cultural presence. That is to say, so many Arab Jewish communities that came into contact with Islam since the 7th century, in Medina. 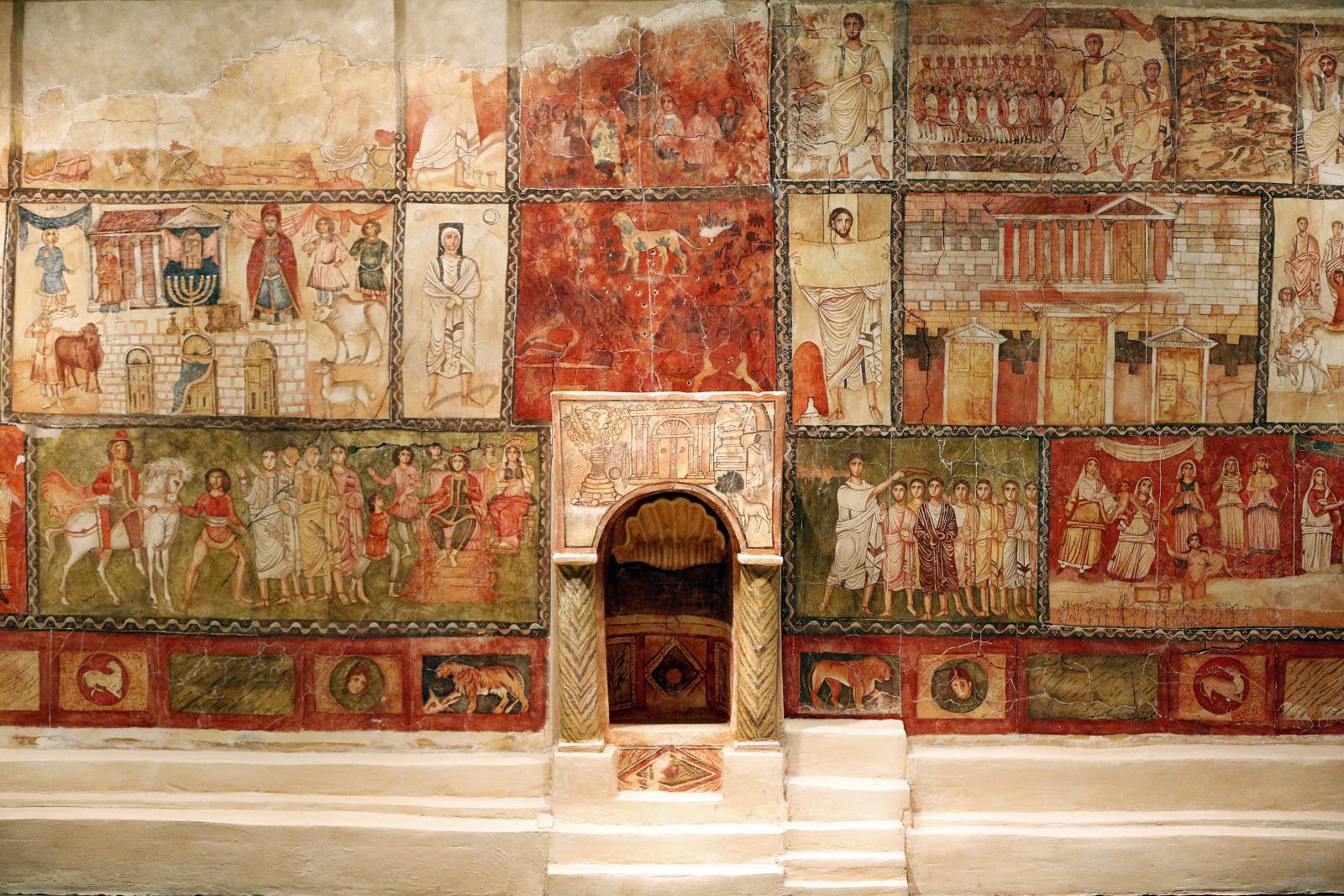 The Dura Europos synagogue (3rd century AD), in present-day Syria, is one of the most important monuments of Jewish art in antiquity. The walls of the prayer room, discovered in 1932, were completely covered with figurative biblical frescoes. Credit: AFP

An archive from the 12th century, probably from the hand of the scholar Maimonides

Later, in an adjoining room, the projection of polychrome frescoes from the 2nd-3rd centuries from the prayer hall of the Dura Europos synagogue recalls the rich cultural diversity of the ancient Hellenistic and Roman city of Syria. As for the medieval part called “the time of the dynasties” (7th to 15th centuries), he is interested in the places of knowledge and the great intellectual centers of the Jewish communities that then lived in an entirely Muslim world. Those of Baghdad, al-Andalus or Cairo, here represented through notable works exhibited for the first time. Thus, a 12th century archive, probably written by the hand of the scholar Maimonides (1138-1204), found in the Genizah of the Ben Ezra synagogue, in the El Fustat district, Old Cairo, then the center of the eastern Jewish world.

In this sacred space all the originals in the Hebrew language were kept in disuse and in which the name of God appeared, as is the case in the entire Jewish tradition. In Cairo, this ritual deposit saved more than 300,000 objects deposited between the 9th and 19th centuries. Writings spanning 900 years of history still under study. 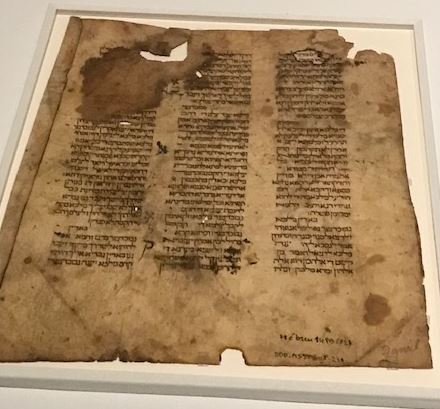 Certificate of commitment to the Karaite, Jewish religious movement structured in Mesopotamia in the first half of the 9th century, found in the Genizah of Cairo (Egypt). Credits: Library of the Universal Israelite Alliance AIU.

Then, continuing the visit, comes “the time of the Sephardim” accompanied by a large map. We see there, between forced conversion to Christianity or forced departure, the dispersion of the Hispanic Jewish communities (called “Sephardim”) expelled from the Iberian Peninsula by the Spanish rulers in 1492, and their emigration to the Mediterranean to found new homes, particularly in Morocco, in the Ottoman Empire and in Europe. From the 18th century on, the Sephardic cultures of the East, after the new exiles, met for the first time in Western Europe with those of their Ashkenazi co-religionists. 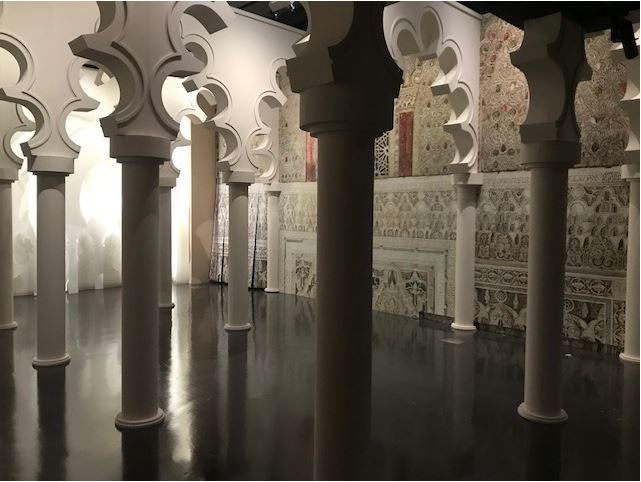 One of the sets for the exhibition “Jews from the East, a multimillionaire history” at the Institut du Monde Arabe, in Paris. Credits: Bernadette Arnaud / Sciences et Avenir

Closing the exhibition, comes “The Age of Europe”, that of colonizations, the First World War, the dismantling of the Ottoman Empire, the rise of nationalism and its impact on Jewish societies in the Arab-Muslim world. 20th century that will lead to moments of tension and then ruptures. “This unique exhibition shows a story driven by the need for transmission to future generations, that single knowledge, culture and a non-fantastic history can illuminate “, concludes the historian Benjamin Stora, citing his writer and academic friend Abdelwahab Meddeb, who died in 2014. This coexistence between the Jewish and Muslim populations will in turn have been fruitful or conflictive, as is also illustrated by a large number of photographs and documents from ‘ file. Most Jewish communities have disappeared from the eastern lands since the 20th century. Shows, screenings and concerts will accompany this exhibition-event throughout its duration.

The launch of the Atlas V rocket of the US military space mission was delayed until Monday. How to watch live.

Mandatory vaccination: will France end up giving in?

I just fought alien spaceships, monsters, and the Cube Queen at the end of Fortnite Chapter 2 ‘The End’

Château-Renault: a man arrested after the discovery of a cannabis crop at home

The only total solar eclipse of 2021 in pictures: incredible photos of Antarctica

The launch of the Atlas V rocket of the US military space mission was delayed until Monday. How to watch live.

Mandatory vaccination: will France end up giving in?

I just fought alien spaceships, monsters, and the Cube Queen at the end of Fortnite Chapter 2 ‘The End’

Château-Renault: a man arrested after the discovery of a cannabis crop at home

The only total solar eclipse of 2021 in pictures: incredible photos of Antarctica