A request for authorization of a class action to force Toyota to extend the warranty on the cable powering the rear electric motor of the 2019-2022 Toyota RAV4 Hybrid and RAV4 Prime SUVs (plug-in hybrid version) has been filed with the Chief of the Court.

Leading firm Adams Avocat criticizes Toyota Canada for limiting the warranty on this cable to 3 years/60,000 km, when most of the hybrid system components on these vehicles are covered by 8 years/160,000 km. km.

Cable replacement costs over $6,000 including parts and labor. Toyota bears part of the costs for certain consumers, but the decision to do so “is arbitrary and the customer is at the manufacturer’s discretion” can be read in the authorization request.

The lawyers behind the request are calling for a new car to be provided to owners while they wait for an upgraded spare cable to fix their car. Toyota struggled with parts supplies well before the pandemic, with weeks of delays in parts being reported. Lawyers are also seeking $300 for repairs as punitive damages.

The statement claims that Toyota is well aware that the original cable is defective. In March 2022, the manufacturer notified its dealers not to renew the warranty when the buyer came to replace the old cable. He would also sign confidentiality agreements with clients who would receive a partial contribution from Toyota Canada. According to the authorization request, the consumer cannot waive the right granted to him by the Consumer Protection Act.

Owners who wish to follow the progress of the class action request can register on the Adams Avocat website.

A new cable may not be a panacea

The Automotive Protection Association (APA) was recently able to inspect a 2021 RAV4 hybrid with a new improved wiring harness. It is always placed under the rear motor, vulnerable to moisture and salt buildup. The new connector seems to help absorb moisture better, but other changes, if any, are not visible to the naked eye; there was already a slight beginning of corrosion on the connection …

Until 2019, the connection was located above the engine and was better protected. Time will tell if this change made to the 2021 model will be enough for the cable to have the lifelong resistance it should.

Toyota must extend its warranty for the current model year and beyond to demonstrate to its customers that it has confidence in its modification. 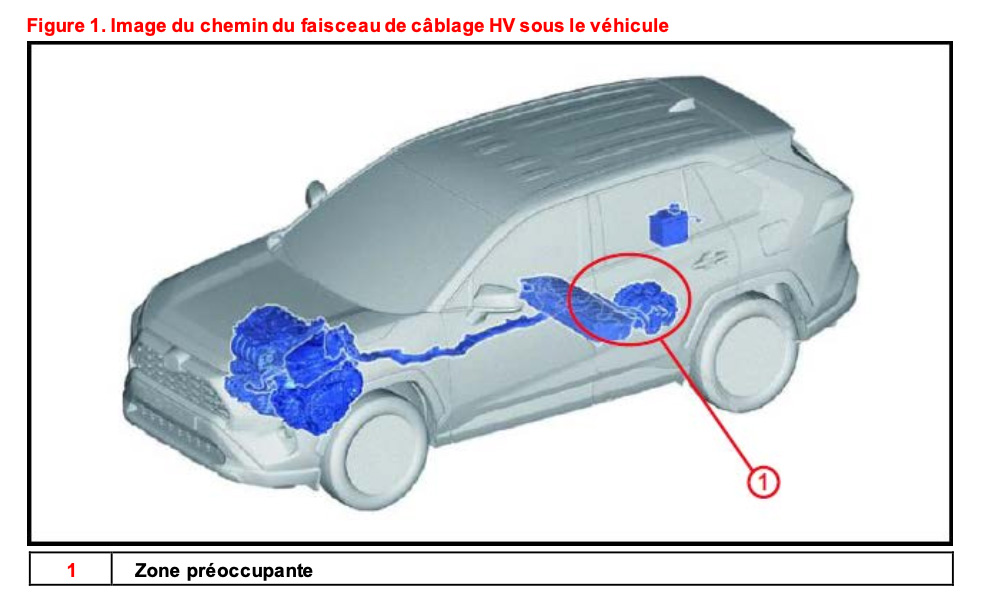 The private Facebook group “Towards a RAV4 Hybrid/Prime Recall” has done an important job of gathering owner-experienced cases as well as technical information regarding a faulty wiring harness powering the rear engine of the RAV4 Hybrid and Prime. According to Jean-Thomas Landry, one of its representatives, the cables on most 2019-early 2021 models will need to be replaced in the medium to long term.

From quality defect to safety defect

According to Transport Canada, cable failure is not a safety defect. The circuit appears to be well protected and no cases of overheating or fire have been reported. And before the car breaks down, warning messages and indicator lights signal it’s time to go to the dealership.

As a rule, the driver is required to report the warning to the repairman so that he can fix the problem before his car breaks down. But in the case of the RAV4, the astronomical cost of repairs, as well as the methods used by Toyota to limit claims, ensure that most consumers continue to drive their cars while waiting for a resolution to their claim.

According to Jean-Thomas Landry, an analysis of complaints received by the Facebook group shows that up to 30% of vehicles equipped with a faulty cable are at risk of breaking down while waiting for an offer from their dealer or Toyota Canada.

The Facebook and APA group are currently looking into rear motor cable resistance information for other models that may have the same design as the RAV4. Among them are the following models:

The all-wheel-drive 2021 Venza and Sienna are supposed to be assembled with improved cabling, but they could share the same vulnerable setup.

There were no complaints about the above models to the APA; perhaps the more successful connector design on these models, or the more secure location, points to a solution for the vulnerable RAV4 Hybrid and Prime.

Be careful if you receive a partial offer

In anticipation of a possible compensation program, the APA is advising owners of these vehicles to modify and not sign the Settlement and Release Agreement required by Toyota when paying for the cost of cable replacement.

In clause 2 of the agreement, Toyota Canada requires that the consumer “withdraw fully its claim against Toyota and make no future claim or complaint, legal or otherwise, against Toyota in connection with or in any way arising out of or relating to the claim and repair of the vehicle… »

So in the event of a better offer to all owners and renters to replace the cable, Toyota appears to be closing the door on signers who would receive only partial compensation.

The agreement also contains a privacy clause that restricts the consumer who would like to share their experience with, for example, other RAV4 owners or even the lawyer who submitted the authorization request.

Can we recommend RAV4 Hybrid and Prime?

The RPM show team, which conducted a detailed analysis of the issue, decided to “withdraw the Toyota RAV4 Hybrid and RAV4 Prime purchase recommendation indefinitely.”

APA maintains its recommendation of models that come with an updated cable. The recommendation for 2019-early 2021 models in the used car guide will now include a warning to check the cable or obtain a warranty from a specific dealer or seller on the cable in the sales contract.

Ideally, Toyota will extend the warranty on affected models as well as current new models to restore consumer confidence. The cable that connects the batteries to the electric motor is expected to last the life of the vehicle and should be covered by the 8 year/160,000 km warranty for the other components of the hybrid system. As long as, thanks to shortages, manufacturers’ mistakes don’t affect the sale of their cars, Toyota can sell anything it can build…

>> Read also: Class actions, how do they work?