Digital Minister Delegate Jean-Noel Barraud promised to take action “by the end of the year” to address quality issues in fiber optic networks. They are to be submitted on September 23, according to the newspaper Ouest France. On this occasion, on September 5, a meeting was held in Bercy between the minister, the operators and Arcep.

a fleet of recent, but worn-out connection cabinets

Did they talk about wild padlocks set up by the locals in Neuilly-sur-Marne, or cabinets locked in the town hall in Aulnay-sous-Bois, who in history spent 70,000 euros without getting the approval of the telecom operator that owns the network? These tense and completely unbelievable situations, which our colleagues at Les Echos described, are the result of the constant degradation of fiber optic equipment in public places.

According to Nexans, a cable manufacturer, more than 60% of the cabinets (used for last mile connections) of the 60,000-65,000 in the area are damaged, and “90% of the damage is the result of communications tampering.” These degradations do not systematically affect the quality of the network, but are a risk that no one can ignore.

The industry is tackling the problem proposal of a quality action planand Senator Patrick Chase, who also represents the digital community, explicitly proposed law proposal “for enforcement purposes” to force operators and their subcontractors to guarantee the quality of communication. He also called for the opening of a parliamentary inquiry into the use of public funds in public initiative telecommunications networks.

There are other ways to secure cabinets besides using wild locks. Nexans has developed an NFC lock that can be opened using a smartphone and an app. By opening the cabinet, the technician (regardless of subcontracting level) simultaneously identifies himself. A sensor installed in the cabinet allows you to find out whether its door is open or closed, by whom, and to mark the time of intervention. Another application is used for surveillance.


The sensors are capable of detecting three types of anomalies: a broken door, which is alerted by the operator and the municipal police; too long opening (usually intervention does not exceed a few minutes); and fire outbreak or flood due to data temperature and humidity.

This complete solution, called Infrabird, has been tested in Meaux (Seine-et-Marne) since 26 January 2021 following a tender issued by Orange as the infrastructure operator that equipped 30 out of 90 cabinets in that city. 55,000 residents, and all commercial operators have signed an agreement to use the solution. The duration of the experiment was extended four times. The result: “45% fewer end-customer breakdowns with Infrabird-connected cabinets,” says Matthieu Brigaud, Nexans Product & Solutions Manager, knowing that there are about fifty interventions per cabinet per cabinet per year.

deterrent effect of the police

“In Moe, this improves after-sales service for the entire fleet of cabinets, even those that are not connected to each other. Technicians know they are being watched. Only by controlling who is the source of the problem will we be able to fix it upstream. Otherwise, it will remain curative. As Infrabird evolves, various stakeholders are realizing that cabinets are being increasingly controlled. This clearly has a deterrent effect.”

Currently, Infrabird equips about fifty cabinets in Meaux, La Courneuve, Saint Ouen and Mareuil les Meaux, again with Orange. This appeals to local authorities like Neuilly-sur-Marne, but not being owners of the networks, they depend on the goodwill of infrastructure operators who build and lease their lines to commercial operators in low-income areas. dense – because they are the ones who pay. The Nexans solution fee is between 35 and 40 euros per cabinet per cabinet as a flat rate (materials and labor). In the most critical areas, additional options are offered, such as remote opening of the door for emergency intervention.

“A replacement door costs a little less than 100 euros, and a lock 3 euros in spare parts (excluding labor costs). Knowing that a closet is 400 customers, we calculated that Infrabird would save 860 euros at an annual cost of more than 3,000 euros on the repair of a closet that we systematically repaired,” says Mathieu Brigaud. “The problem is that infrastructure operators very recently had a budget for maintenance. Until now, they only had a deployment budget.” “Prices will drop if there is more volume,” adds Nexans. 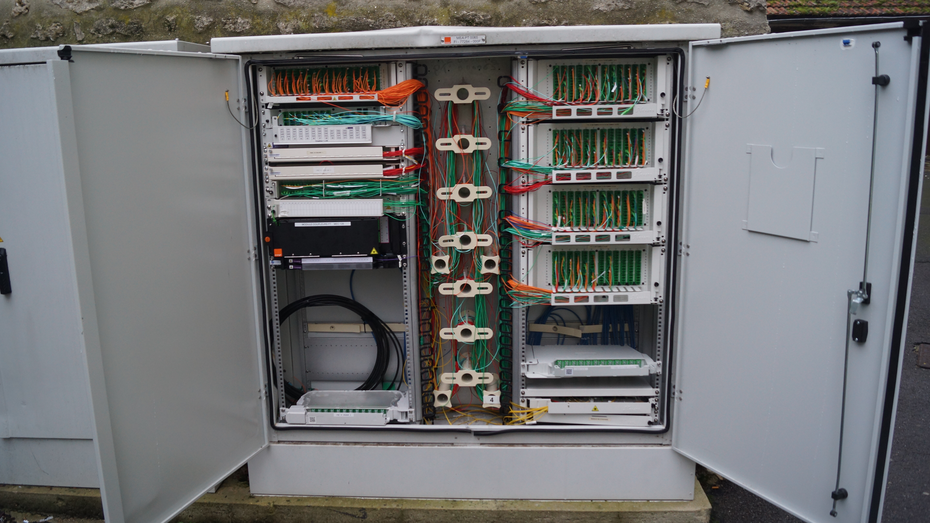 Bills for some services may also be charged to commercial operators (Internet Service Providers, Internet Service Providers). This is a case of a particularly useful option for monitoring technicians’ actions: it consists of tampering timestamps sent to ISPs to automatically notify the technician on his mobile phone if he has disconnected a subscriber for him to repair before leaving the premises. .

Specifically, the provider sends a query when the cabinet door is open and when it is closed to compare the lists of clients on the network and thus see who has been disconnected during that time. “In Orange and Bouygues Telecom, this has reduced customer breakdowns during interventions from 12-13% to 0,” Nexans says. The option that SFR did not want to use costs 15 euros per month per office.

Nexans, which is developing a solution to secure connection points at height, on electric poles or telephone poles, hopes to connect 50,000 to 60,000 cabinets by 2025, when the manufacturer says the number of cabinets should be between 110 and 150,000 units. But despite the news, and if requests for information start to rise, the company really isn’t getting more bid requests than before.

There are other solutions on the market, for example from TKF or Acome, which are not more successful. Infrastructure operator Altitude Infra, which specializes in social initiative networks, is working with manufacturers on its own C-Clock solution. He tells us that he has been testing a security solution for two years.cabinets es and traceability of interventions for which IHe is currently experimenting with Grand Est and soon to Doubs.

Grade: “The first reviews of the experiments are very positive.welcomes Altitude Infra. The use of the solution by commercial operators is 100%, there is very little damage, and cabinets generally hold up better. Mixing seems “cleaner” than in an unequipped cabinet. There is also a downward trend in connection failures.” Therefore, Altitude Infra is considering “large-scale industrial deployment to meet the high demand from communities.” The first deployments could take place by the end of 2022/beginning of 2023.