Juventus are celebrating their big comeback in the FIFA license after three years of absence. The white and black club has signed an agreement with EA that marks the end of PES exclusivity.

[Mis à jour le 26 juillet 2022 à 09h57] FIFA 23 arrives in our living rooms on September 30 and is set to change the way we look at football games. EA’s most popular franchise is celebrating its last anniversary before breaking completely with FIFA and bringing us an annual release more powerful than ever with Hypermotion 2 and the advent of women’s football. Other news of the day is that FIFA 23 boasts of bringing Juventus Turin back to its teams, the Italian club recently signed an agreement with Electronic Arts. So, after three years of exclusivity, Pro Evolution Soccer Juve will be available in FIFA 23.

EA recently announced the signing of a multi-year partnership agreement with Juventus Turin. Thus, the Italian club will return to the next EA Sports games, i.e. FIFA 23 and the next independent license from EA, EA Sports FC. Prior to this, Juve had been a Konami exclusive for PES and eFootball games for just over three years. As such, FIFA players will have the pleasure of finding Italian club stars in the game, such as Adrien Rabiot or recent rookie Paul Pogba, who has just injured his right meniscus elsewhere. This partnership will also lead to various related activities between EA and Juve and will continue beyond the end of FIFA games in 2023.

Two minutes of trailer, muscle movements, all kinds of kicks… Without a doubt, we are in the FIFA trailer. In addition to the two stars of this definitive edition of the most popular football game, there is new information about its content. FUT mode, Hypermotion 2, World Championships (and yes, the Women’s World Championship will also be in the game this year)… The desire to provide the player with an immersive experience is more than ever at EA. Scheduled for release at the beginning of the school year in September, the game is set to impress before the final break between FIFA and Electronic Arts.

In truth, FIFA 23 will release on PC, PS4, PS5, Xbox One, Xbox Series, and Nintendo Switch on September 30, 2022. But that’s not all, some lucky ones will be able to access it via Early Access starting September 27th. Indeed, there are different ways to take advantage of this, we have listed them in the article below, but if you are an EA subscriber. In the meantime, you’ll have to wait a few more weeks to see what’s new in FIFA 23.

If this short presentation of FIFA 23 convinced you, know that it is already available for pre-order! Only you will find it not yet on the websites of French and European retailers, but on the official EA website. The game will be available on PC, Playstation 5, Playstation 4, Xbox One, Xbox Series and Stadia. Attention, as far as FIFA 22 is concerned, only the next generation versions (i.e. PC, PS5 and Xbox Series) include Hypermotion 2 technology improvements. As for the versions, the game is available in the standard edition (€79.99 for PS5 and Xbox). Series and €69.99 for PC, PS4 and Xbox One) and Ultimate (€99.99).

The Ultimate edition includes various perks such as FUT World Cup 2022 Hero, 3 days early access to the game, free upgrade to the next generation version (if you buy it on PS4 or Xbox One), FUT spectator item, Mbappe on loan in FUT, 4600 FIFA Points, local talent in Career Mode and FUT Ambassador on loan. 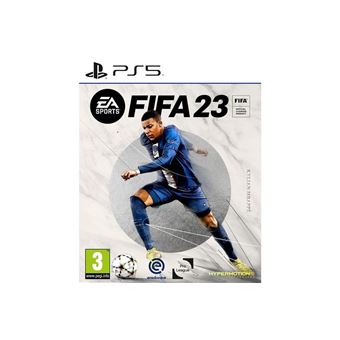 The release of a new FIFA is always accompanied by a small mystery: who will be behind the French commentary of the matches? If the latest FIFA credited this honorary role to Pierre Menes and Herve Mat, the former of whom was ousted from the game after various sex scandals, FIFA 23 is going in a completely different direction, to the delight of many football fans. Indeed, in the French versions, Omar da Fonseca and Benjamin da Silva, the La Liga duo for beIN Sports, will now be commentators on screen. “Childhood dream” of Da Silva, who does not hide his joy from the fact that he was able to take part in the development of the game.

FIFA 23 is not really going to skimp on technical innovation. The game invites you to discover Hypermotion 2, the motion capture technology that made the PS5 and Xbox versions of FIFA 22 so successful. realism of football, and we can already see in the trailer the quality of animations of movement, kicks, tackles and even blades of grass from the lawn (yes, yes). While this is the last FIFA game ever (see later in this article), EA is determined to impress with FIFA 23.

Also note that for the first time, FIFA 23 will offer next-gen versions across three different media, the new baby being PC. Thus, keyboard and mouse players will finally be able to play with their friends on PS5 and Xbox Series via crossplay and take advantage of Hypermotion 2’s technical innovations. In addition to this information, we already know that the game will take pride of place. to women’s football, confirming the integration of women’s national teams, as well as providing players with the opportunity to get acquainted with the teams of the women’s championships in France, England, Germany and America.

In addition, the game intends to offer us an edition with two very different world championships. Qatar will host the FIFA World Cup in 2022 and the Women’s World Cup in Australia and New Zealand in 2023. . These two competitions will not be available when the game launches next September, but will be the subject of subsequent and completely free updates a few months after its release.

FIFA 22 introduced us to the idea of ​​two different versions of the same game. This release involved two generations of consoles with different technical capabilities, so EA decided to offer two games. The first was the next generation version (PS5 and Xbox Series) which included all the technical innovations of this new generation of football games, and the second was the old generation version (PS4, Xbox One and PC) which remained a simple update. FIFA 21. A decision that was far from unanimous, players first noted that PCs were limited to the “old” generation and deplored the lack of cross-play between Xbox One, PC, and PS4.

In FIFA 23, things are different. If two versions of the game still exist, separating the new generation from the old, the rules have changed. PC, PS5 and Xbox Series players will be able to enjoy the same version of the game and even crossplay which has been fully integrated into the game. For PS4 and Xbox One players, don’t panic, they are also offered crossplay. These cross-play features include, of course, FUT Division Rivals (excluding co-op), FUT Champions, FUT Ultimate Online Draft, FUT Online Friend Matches (excluding co-op), FUT Play with a Friend, Online Mates and finally , online seasons.

If there is a category of players who have been very negatively impacted by recent releases of FIFA, it is Nintendo Switch players. The latter must be satisfied for several years with “obsolete” versions of the game, i.e. a copy without new technical improvements of its counterparts on PC, Playstation and Xbox. As for FIFA 23, unfortunately this trend continues. So FIFA 23 on Switch will also be an “outdated” version of the game, as EA themselves say: “Gameplay and modes [de FIFA 23] will be identical to FIFA 22 for Switch and will offer the same gameplay as the Legacy edition of FIFA 22 without any new development or significant changes.” If you or someone close to you owns a Nintendo Switch, we highly recommend that you continue with this edition of the game.

FIFA 23 muse Samantha May Kerr is an Australian player who plays for Chelsea in the Women’s Super League. She was born in 1993 in East Fremantle and is the daughter of Roger Kerr, an Australian footballer who played in the 80s. Chelsea in 2019. In addition to being the first woman to wear the FIFA jacket, she is also the highest paid player in the world and top scorer in the Women’s Super League championship since 2020. Chelsea win the competition every year. since his arrival. Sam Kerr certainly has the track record that the greatest players in the men’s championships dream of, including one FIFA 23 cover star Kylian Mbappe.

If for the first time the cover of a FIFA game is dedicated to women’s football, the game intends to further integrate women. So, we recently learned that FIFA 23 will feature several national championships, including the French D1F. All twelve teams that make up this “Women’s League 1” will be playable, and the FAWSL (England), NWSL (US) and Frauen-Bundesliga (Germany) championships will also be fully playable. A big step forward for FIFA, which has so far been content with only including national selections in its previous sections. Also note that the game will include, as we said above, the 2023 Australia and New Zealand Women’s World Cup as a free update once it’s released.

On the sidelines of the arrival of FIFA 23, we couldn’t help but notice that this 25th iteration of the franchise will be the last to bear the same name. Indeed, you may already know that a divorce has been announced between EA Sports and FIFA. Reason? On the one hand, FIFA wants to increase the fees paid by EA for owning the license, on the other hand, it also intends to make it agree that FIFA appears in other video game franchises (Roblox, Fortnite…). Too unbelievable idea for EA, which decided to go it alone from 2023. Thus, FIFA 23 will be the last football game to bear the well-known name of the International Football Federation.

As for the future of football simulations, don’t panic, EA intends to develop its own franchise that will bear the name EA Sports FC. Only EA Sports FC will have to drop World Cup-related content directly licensed by FIFA. As far as clubs are concerned, according to EA, the game shouldn’t be a problem. We’re all grumpy on FIFA’s side, but we’re determined to find another flag bearer for the official football sim. There are various candidates for the dance, among the biggest studios in the world of video games, but at the moment no information has been released on this.