Although today, music is mainly consumed via the smartphone when you are on the move, some brands continue to develop music players, such as Sony and its Walkman, Cowon or Astell & Kern range. To differentiate themselves, these devices mainly target audiophiles and thus rely on high-level audio quality. Despite its relatively young age, the Chinese brand FiiO, launched in 2007 by former Oppo players, is already one of the references in this field.

The manufacturer has nearly ten models in its catalog currently, including the M11 Pro released in 2019, model that we are testing today and a more high-end version of the M11. The Pro version is distinguished mainly by its double DAC AKM AK4497EQ accompanied by a low distortion amplification circuit signed THX and a larger internal storage capacity (64 GB against 32). Powered by Android, this Hi-Res audio player is currently sold for the tidy sum of € 699.

Visually identical to the M11, except for a few logos, the M11 Pro takes up its sober but rather elegant design feature for feature despite its false air of a hardened smartphone. On the other hand, unlike the M11, the M11 Pro does not come with a protective shell, which is not really reassuring at first, especially since the front as the back of the device is made of glass. The chassis is made of aluminum. Very well finished, the whole is quite robust in reality: we have dropped the player two or three times (from quite low however, 40 to 50 cm) and it always got away, almost without any scratches and without the slightest scratch. In this regard, we tried to scratch the screen with keys and a paper clip, but to no avail. Good news. 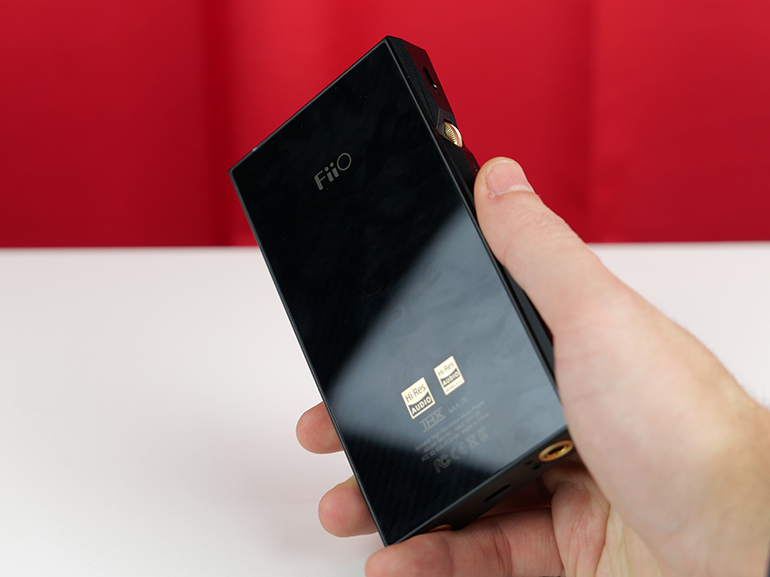 The M11 Pro sports a 5-inch LCD touchscreen IPS technology offering a definition of 1440x 720p. This is more than enough for what we ask him to do. The brightness is correct, as well as the colors and the contrast. However, if you were to use the M11 Pro to watch videos, no worries but you should know that the screen is at the level of an entry-level smartphone. It remains a thousand miles from an Amoled Samsung screen for example and subject to reflections.

The connectivity offered by FiiO is complete and rather standard on this range of devices. There is a 3.5mm jack port that can also be used as a coaxial line output to power a Hi-Fi amplifier, and two balanced outputs (2.5mm and 4.4mm). The brand also provides a 3.5mm jack to RCA adapter. On the wireless side, the player is compatible with Wi-Fi (2.4 or 5 GHz) and Bluetooth 4.2. Too bad the brand did not include Bluetooth 5. A MicroSD port is also available to expand the 64 GB of internal storage (52 in reality). Moreover, it should be noted that some competing models such as the Cowon Plenue R2 ship 128 GB automatically for a lower price. Fortunately, the MicroSD port can add up to 2TB. 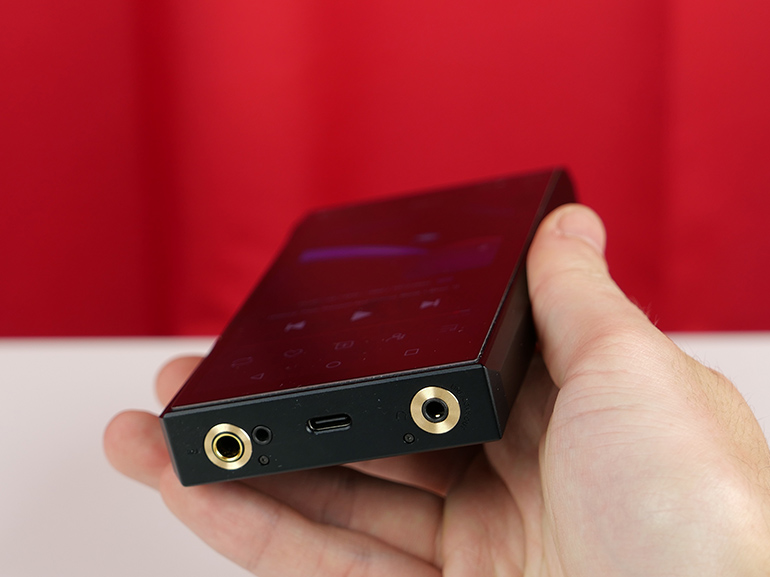 For battery charging, the device has a USB-C port. It will take 2 hours to recharge and will last about 9:30 am wired via the 3.5mm jack and 8:30 am with the balanced outputs according to the brand. However, this obviously depends on your uses. In Wi-Fi streaming with a Bluetooth headset and the volume set to 75%, the player has kept its promises with greater autonomy even than the brand announces.

Ergonomics and functions, the benefits of Android

In use, this walkman works wonderfully. Despite its tactile interface, it also has control buttons on the edge to put the music in play / pause, go to the next song or return to the previous one, as well as a notched wheel for the volume. It’s simple and it works well, we prefer this system to that of Sony music players with a few too many buttons for our taste. In addition, the notched wheel is much more intuitive when you have the player in your pocket than the Sony + and – buttons. The touchscreen interface is also very efficient, navigation is fluid thanks to the 3 GB of RAM and the Samsung Exynos 7872 SoC of the player, the same as in the Meizu M6s smartphone. 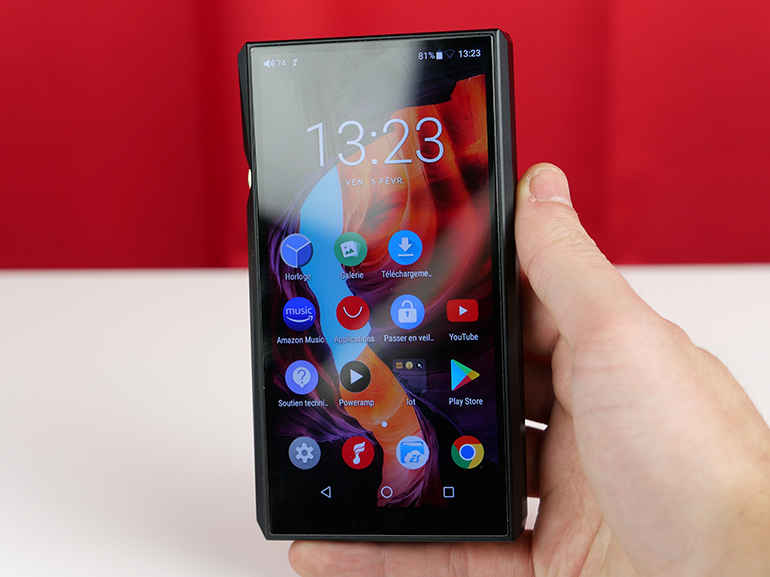 This image illustrates the screen’s sensitivity to reflections.

The Android modified by FiiO is based on version 7 (Nougat) of the Google OS, released in 2016. It’s a bit anachronistic nowadays even if the brand continues to update its player regularly. Some competitors, like Sony’s NW-A105, employ more modern versions (the 9 in this case). Not to mention Apple’s iPods running iOS 13. That being said, Android integration really makes the difference compared to the cheaper models (from FiiO and others) which generally use infinitely worse home OS and much more. limits. This is the case with the M3 Pro from FiiO for example or the Sony NW-A55L, which is so impractical to navigate. 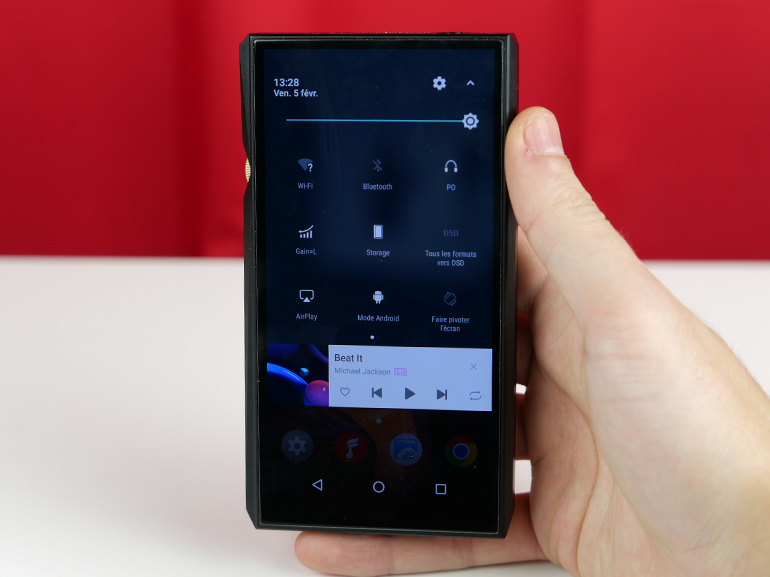 With the M11 Pro, you can enjoy a REAL Android experience, which is very appreciable. Not only in terms of ergonomics, settings, but also for the many applications of the Play Store. We thus find all our favorite streaming apps, Spotify, Deezer, Amazon Music… our favorite audio players, but also the apps of our wireless headsets like Sony Headphones or our multiroom systems like Sonos for example. In absolute terms, you can even download video streaming apps like Netflix or games.

For music, FiiO automatically integrates its FiiO Music audio player, which is quite good overall and quite complete. The application offers all the basic functionalities expected, it is also compatible with the DLNA standard to share music wirelessly between several devices, it has recently a car mode, a 10-band equalizer, a search engine and a slew of tweaks. 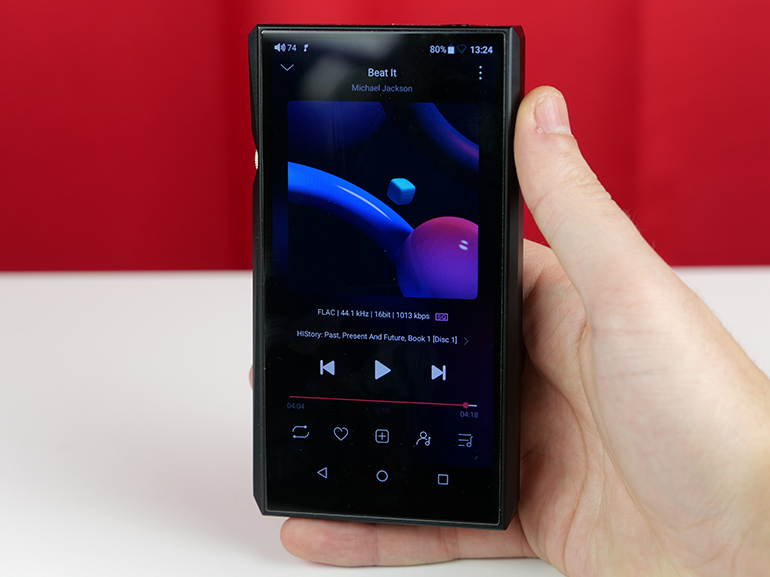 However, it still has room for improvement, especially when compared to some of the best Android players like Poweramp (paid), which goes much further in terms of sound settings and offers even more features, such as a better equalizer. that can be set differently for each song or headphones for example. FiiO Music is also a little less ergonomic and we regret that the application does not provide information on the signal being played (sampling, codecs, possible processing, etc.) as Poweramp does. Fortunately, thanks to Android, you can install the player of your choice. 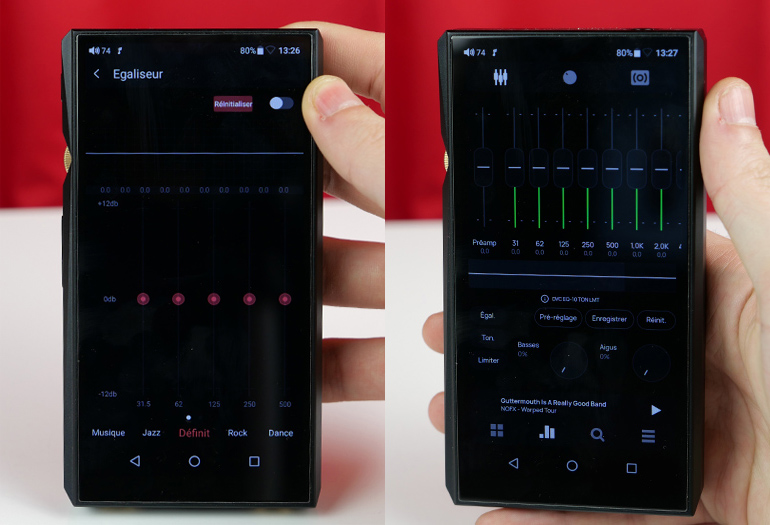 FiiO music’s equalizer on the left, Poweramp’s on the right

The overall audio quality of the M11 Pro is excellent, the sound is rich, extremely detailed and at high volume we do not perceive any harmonic distortion thanks to the very good integrated DACs, AKM AK4497EQ and the THX AAA-78 amplification circuit. These seemed to us to be very transparent, we did not perceive any specific coloring. Technically speaking, the M11 Pro can handle sampling up to 32-bit / 384kHz and offers a frequency response ranging from 10Hz to 90kHz, which in practice is completely unnecessary. Firstly because it goes far beyond the capabilities of the human ear, secondly because you won’t find anything to listen to with this sampling and no headphones taking advantage of this frequency response. But hey, who can do more can do less. The signal / noise ratio is also excellent: 118 dB according to the manufacturer’s data. 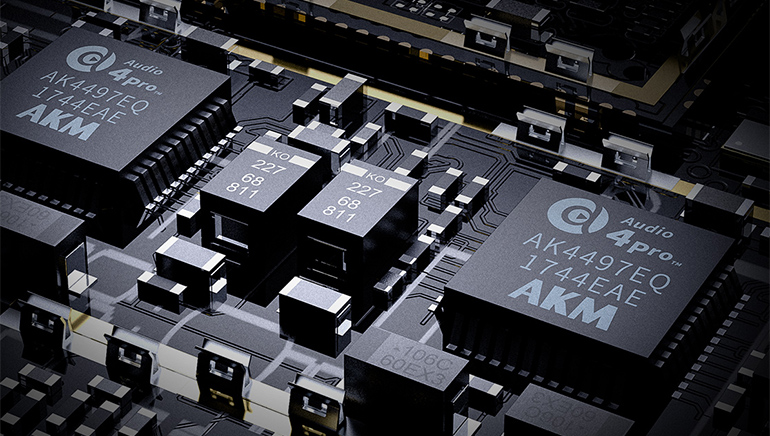 The double DAC of the M11 Pro – Image credit: FiiO

To test the audio from the walkman, we used various wired and Bluetooth headsets, including Sony WH-1000XM3, Beyerdynamics DT990 Pro, Sennheiser Momentum 3 and True Wireless 2 or the Apple AirPods Pro. We also compared with our external sound card Audient ID44 and some smartphones, such as Samsung Galaxy Note 10+ and OnePlus 6. The M11 Pro was clearly better than smartphones (it was not day and night either, contrary to what one might think), on the other hand we did not manage to distinguish the winner between the player and our ID44 . We have used both FLAC, WAV, MP3, and streaming platforms including the HD version of Amazon Music. 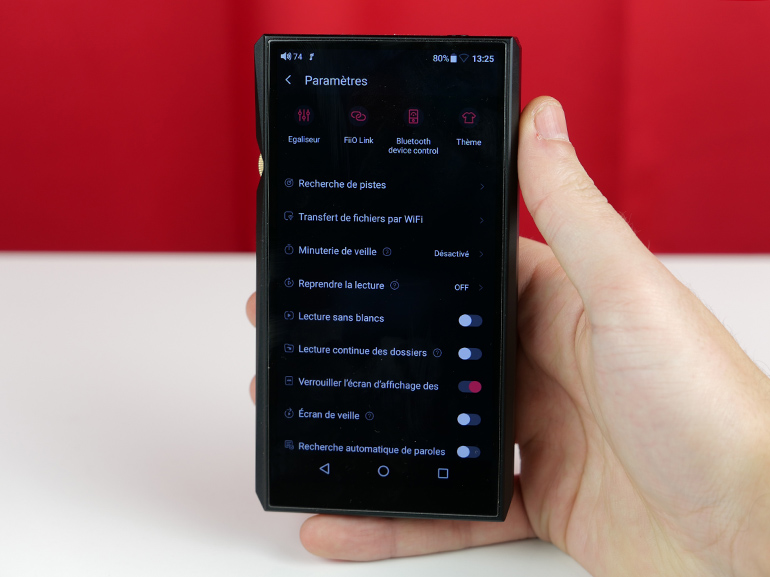 The settings of the FiiO Music application

We were thus able to go up to 24 bits 192 kHz, both in streaming and locally. Moreover, another positive point of the M11 Pro, it supports all the main Bluetooth transmission codecs (SBC, AptX, AptX HD, LDAC, LHDC …) which means that you can also enjoy a high quality stream, even Hi-Res with LDAC, in Bluetooth. The M11 Pro is also compatible with Apple’s AirPlay protocol and supports a wide variety of audio formats (FLAC, MP3, WAV, DSD, MQA, AAC, ALAC…). It also offers good power and can operate in low mode gain or high gain. Finally, you can connect it by USB to your PC using the supplied cable in order to use it as a high-end USB DAC. You just have to install a small driver to access the highest samples. In short, everything is there, it’s a flawless sound side.

This player has a lot of competitors in the same price bracket. We can cite the Cowon Plenue R2 or the very design Astell & Kern SR25, two music players sold at similar prices but without Android. At Sony, the direct competitor of the M11 Pro is the NW-ZX507, also running Android and displaying a similar technical sheet. It can be a good alternative. the Japanese giant also offers the NW-A105, another more affordable alternative and also running on Android but slightly less well equipped technically.

Finally, at FiiO, there is also an even more high-end model, the M15, which for its part has Bluetooth 5 and a more recent double DAC but keeps the Android modified in version 7.0. However, we are no longer on the same budget since it is available around 1400 €.

The FiiO M11 Pro is an excellent player for discerning audiophiles willing to spend a lot for their passion, since beyond the player itself, it is also necessary to obtain the high quality files to really benefit from it. and have a very good helmet. Anyway, the device achieves a flawless sound side with excellent quality, good compatibility in terms of formats and Bluetooth transmission codecs, a very low harmonic distortion rate and a substantial power reserve. It embeds a version of Android which is certainly a little old but well maintained and which nevertheless allows access to all the useful applications while at the same time giving the M11 Pro significant ergonomics. Add to that a sturdy and elegant premium design and you have a product of excellent quality. However, for such a high price, we would have liked to have had a more modern version of Android and Bluetooth 5. 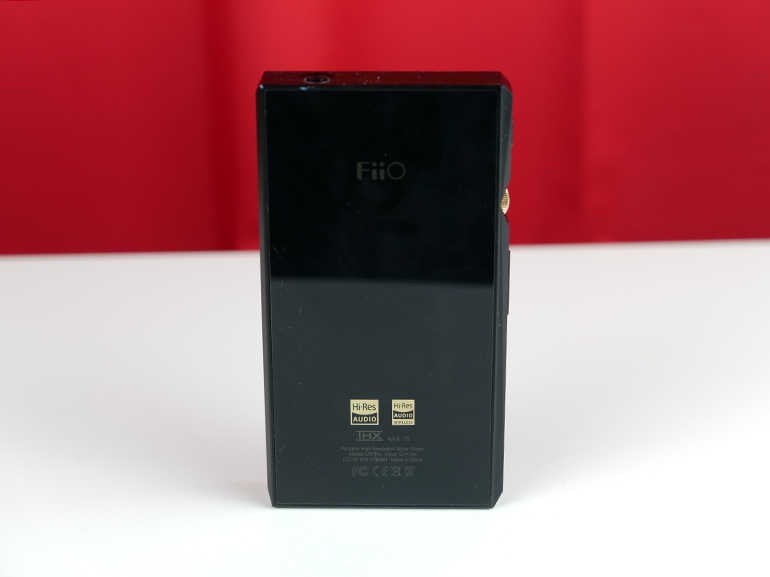