The recent Bitcoin price crash observed on Wednesday is comparable to that of late April. However, unlike last time, this drop was not due to rumors of new tax proposals. While many altcoins are recovering quickly, DeFi cryptocurrencies appear to be making a faster comeback.

The latest price drop in the cryptocurrency market appears to be attributed to the tweet from Tesla CEO Elon Musk, who revealed that the electric vehicle maker will not accept Bitcoin.

According to the tweet, Tesla’s decision revolved around the intensive use of coal-fired electricity to mine Bitcoin and its negative impact on the environment.

Cryptocurrency is a good idea on many levels and we believe it has a bright future, but it can’t come at a cost to the environment.

However, the memo went on to summarize that “Tesla will not sell Bitcoin”.

The energy consumed to mine Bitcoin has been the subject of a debate that has gone on for ten years despite using mainly renewable energy sources or electricity that otherwise would have been wasted. According to Dan Held, Growth Leader at Kraken:

PoW (proof-of-work) is the buyer of last resort for all electricity, creating a floor that prompts the construction of new power plants around disparate energy sources that would otherwise have been left untapped. .

While Musk’s tweet may be conveying Tesla’s opinions, his personal opinions seem to be further removed from the fact that he tweeted “True” to a tweet from Twitter’s Jack Dorsey, which highlighted how Bitcoin mining encourages renewable energies.

Regardless of the opposing views, Bitcoin investors appeared to have panicked and sold their holdings, causing a 20% crash.

After falling nearly $ 9,000 USD, the price of Bitcoin created a new low for the second quarter near $ 46,000 USD. As recovery efforts appear to continue, Bitcoin faces pressure from the low range established on April 18.

For now, the price of Bitcoin remains undecided. However, a convincing close above the resistance level at $ 53,300 USD will confirm an uptrend. On the flip side, a rejection will trigger a downtrend that could re-enter the demand zone of $ 46,930 to $ 49,949 USD.

Assuming a bullish scenario, the price of Bitcoin would consolidate mainly after clearing the $ 53,300 USD level. This movement would be similar to that observed after the initial crash of April 18 or the recovery after April 26. 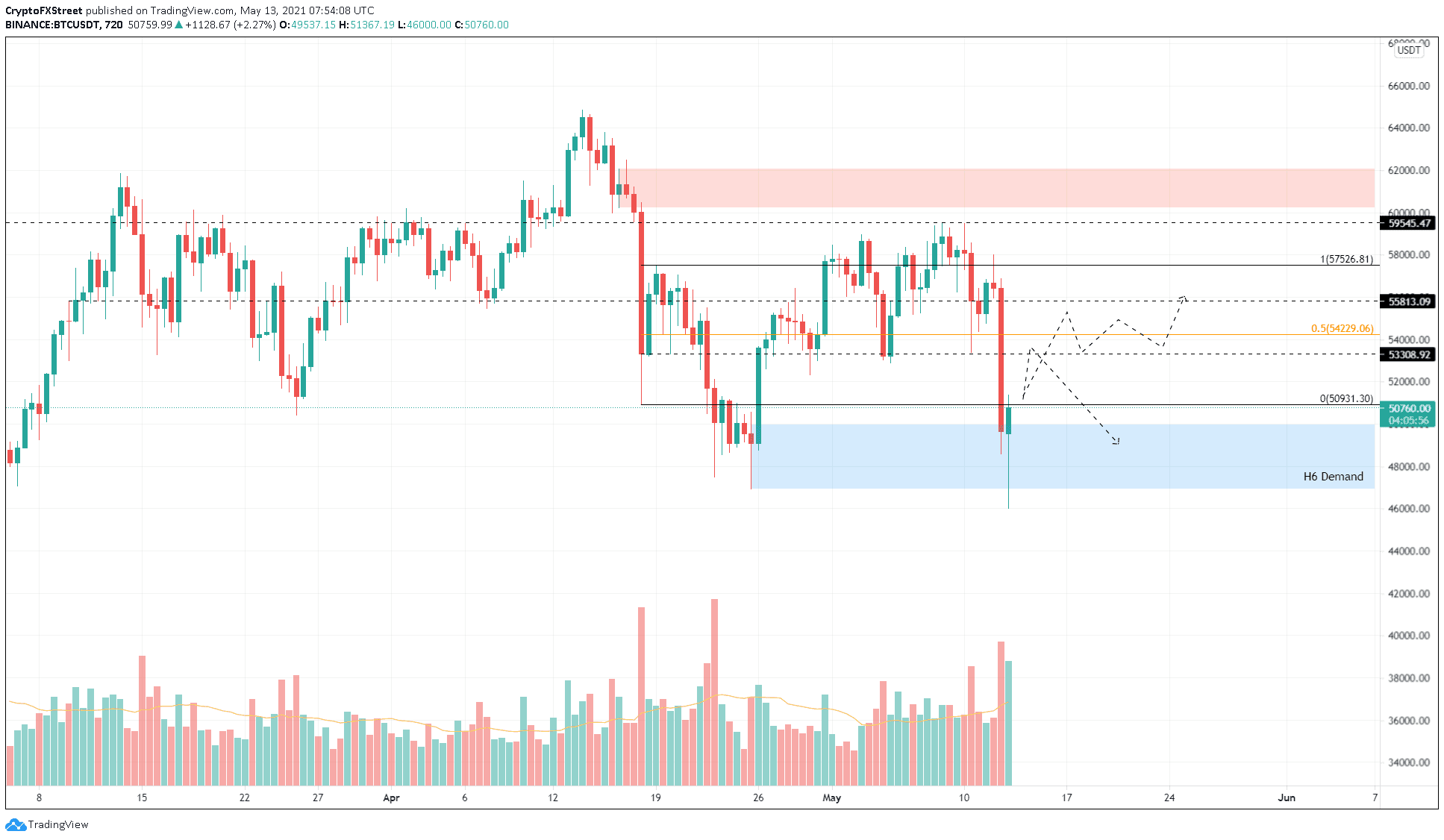 A quick recovery that slices $ 55,813 USD will open the possibility of retesting $ 57,526 USD and subsequent levels.

Ethereum price hike is running out of steam

The price of Ethereum has recovered nearly 14% from the low point of the crash, coinciding with the SMA-50 moving average on the four-hour chart at $ 3,788 USD. While this rebound allowed Ethereum bulls to climb higher, only a decisive close above this level would encourage a rally to the next supply level at $ 4179 USD.

If buyers manage to maintain their momentum here or even add to it, a 5% hike will bring the price of Ethereum cryptocurrency back to its all-time high near $ 4,380 USD.

However, failure to stay above the SMA-50 moving average will cause problems for the main altcoin, triggering a 6% sell at the immediate demand barrier which ranges from $ 3355 to $ 3584 USD. The lower range of this area coincides with the SMA-100 moving average. Therefore, a break of this level will invalidate the price rise of Ethereum.

The price of Ripple’s XRP cryptocurrency slipped 22% as it hit a low of around $ 1.20 USD. However, the buyers quickly recovered XRP which pushed the price to touch the lower limit of the demand zone which ranges from $ 1.372 to $ 1.477 USD.

A reduced buying momentum has led to a pullback that appears to be heading towards the subsequent demand barrier which stretches from $ 0.941 to $ 1.156 USD. Although the price of Ripple’s XRP cryptocurrency has established lower highs and lows since May 4, the bulls may trigger a rally from the demand zone mentioned earlier.

A breach of the $ 0.941 USD support level will signal overwhelming selling pressure and the start of a new downtrend. Under these dire circumstances, investors could see the price of XRP cryptocurrency drop 6% to mark the low created during the April 23 crash at $ 0.886 USD.

Akash has been working in the cryptocurrency industry as a content writer, analyst for over two years. He is a mechanical engineer interested in emerging technologies and financial markets. Attracted by the chaos of trading, he invested in cryptocurrencies and maintains a small crypto fund for his friends and family.

The opinions expressed here are solely those of the author and do not necessarily reflect the views of Forex Quebec. Every investment and trading move comes with risk, you should do your own research when making a decision.

The Ledger Wallet is the storage device the most advanced for storing and using Bitcoin and others cryptocurrency safely.

To get the Ledger Wallet Nano S ” Visit the official website

Disclaimer: The information and opinions contained in this report are provided for general information only and do not constitute an offer or a solicitation concerning the purchase or sale of foreign exchange contracts, CFDs and cryptocurrencies. Although the information contained in this document has been taken from sources believed to be reliable, the author does not guarantee its accuracy or completeness, and assumes no responsibility for any direct, indirect or consequential damages that may result from the fact that someone relies on such information.

Bitcoin 10% in a positive trend By Investing.com

Bitcoin 10% in a positive trend By Investing.com