In Pakistan, schools, along highways, and military bases have spontaneously set up makeshift camps to help millions of people displaced by monsoon floods.

But for those affected, the relief that they are out of danger is most often quickly replaced by despair when they realize that they have lost everything.

In Nowshera, Khyber Pakhtunkhwa (NW), a technical college has been converted into an orphanage for approximately 2,500 people.

Exhausted by the summer heat, they have limited access to food aid and water for washing.

“For the last three days, we have only eaten rice,” Malang Jan, 60, told AFP.

“I never thought that I would ever have to live like this. We have lost our paradise and are now forced to live in poverty,” he adds.

Volunteers from a local branch of a political party distribute food to flood-affected people in the corridors of a technical college in Nowshera, Pakistan. (AFP/Archive – Abdul MAJID)

Her family was rescued by boat when her house was swept away by a flood that inundated a third of the country, killing more than 1,100 people and affecting more than 33 million people.

Tents are set up in the college garden. The classrooms are the home of families who arrived first and took advantage of the chance to find solitude there.

Others cohabit shoulder to shoulder in the corridors where what little they have managed to save from disaster is piled up.

Goats and chickens, rescued from the flood, roam the schoolyard.

The camp is run by various local humanitarian organizations, political parties, as well as administrative officials, shocked by the scale of the disaster.

“The situation is panic,” admits Mushfiq ur Rehman, a district court official who came to help the local government oversee food distribution. 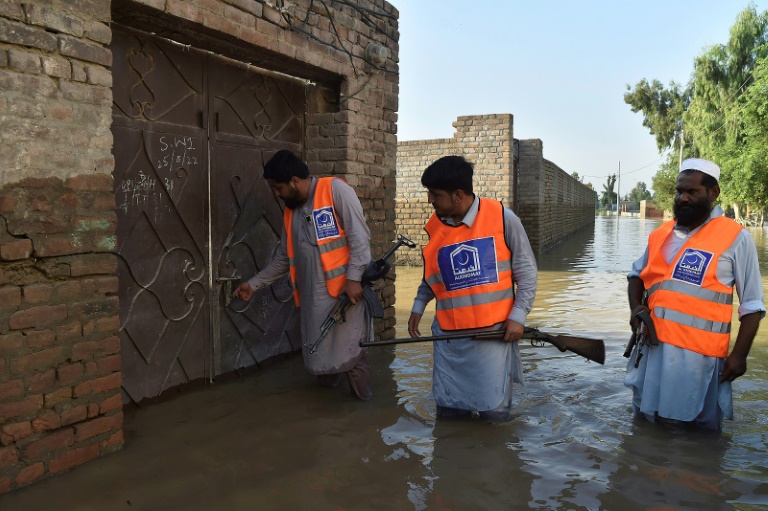 “There is enough food, but people are panicking because they are not sure if they will get another meal,” he explains.

The situation is especially problematic for women in this deeply conservative region, where many wear the veil, the burqa that closes at eye level, and try not to associate with males who are not relatives.

“We are Pashtuns: we don’t often go out, but we have to go out there,” says Yasmin Shah, 56, who took refuge with her family in one of the classrooms.

Young women in cloaks pulled over their heads are watching from the upper floors.

“I can’t leave this class unless I have to,” says another who is watching the blind uncle and asks not to be named.

Elderly women line up for distributions of aid to make sure they get their share of the food.

The heat becomes unbearable when several running fans stop working due to a power outage. No shower and very few toilets.

“Our self-esteem is at stake (…) I stink and there is no place to shower,” said Fazal and Malik, who shares a tent with seven members of his family. 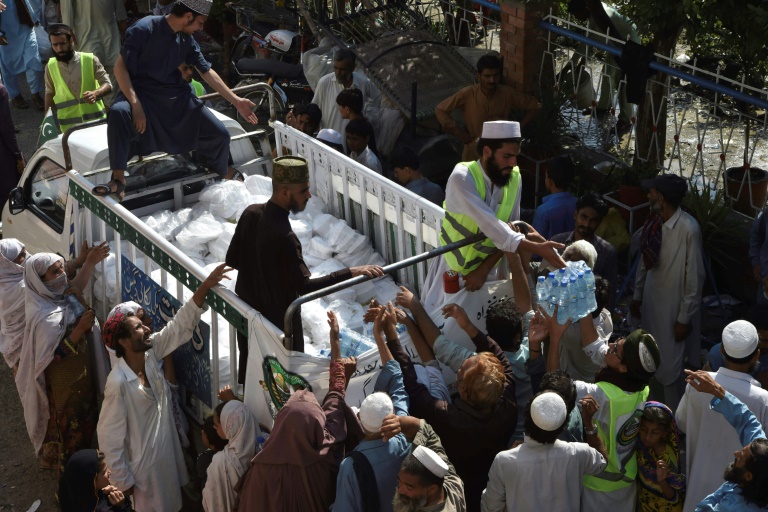 Drinking water is distributed to people displaced by floods in a camp in Nowshera, Pakistan (AFP/Archive – Abdul MAJID)

“Our women also face problems and feel humiliated,” he says.

When food aid arrives at the college, desperate families storm the trucks and the police sometimes beat them with sticks.

“There are regular fights and people have to fight for food. As a result, some get more than their share, while others get nothing,” she said.

The largest Nowshera camp was set up at the Air Force Academic Center. It has a capacity of approximately 3,000 people housed in facilities normally reserved for personnel in charge of training.

Nearby, armed members of a local political party guard abandoned houses. Aboard boats, they patrol the streets to scare off would-be marauders.