By the end of the year, Jared Isaacman, a young American billionaire keen on piloting and passionate about space exploration, should revolve around the Earth at the controls of a space mission made up entirely of “tourists”, thanks to a SpaceX Falcon 9 rocket chartered at own expense.

Called Inspiration4, the mission will be the first of its kind to send only “civilians” into space, without any professional astronaut to support them, he underlines. “This is the first step towards a world where everyone can travel in the stars,” enthuses Jared Isaacman, smiling from ear to ear as he explains his project to AFP in front of SpaceX’s headquarters in Hawthorne, in the suburb of Los Angeles.

The billionaire, boss of the financial company Shift4 Payments – which he founded at the age of 16 in his basement – is an experienced pilot, qualified to fly on military aircraft. He holds a round-the-world jet record (62 hours) and in 2012 founded a company providing training to US Air Force pilots, Draken International.

“I have been passionate about space and aviation for as long as I can remember. When I was in kindergarten I remember looking at a book about the space shuttle and telling my teacher that one day, I will go to space, ”he says.

If all goes according to plan, her childhood dream will be fulfilled in the last quarter of 2021.

A view of the headquarters of SpaceX, an aerospace company created by Elon Musk, on January 28, 2021 (AFP – Patrick T. FALLON)

And it is a pleasure that Jared Isaacman has decided to share with anonymous people to whom he offers the three seats by his side aboard the Dragon capsule, the same model as the one that succeeded last November in putting four astronauts into orbit in route to the International Space Station (ISS).

“Perhaps the most exciting thing about this mission is that we are opening the selection process to people like everyone else. There are some who are walking around today who do not realize that , in thirty days, they will prepare to put on a space suit, ”launches the 37-year-old billionaire.

The idea is to have “a crew that reflects the key values ​​of this mission”. The first seat, that of “hope”, will therefore go to a woman who survived cancer as a child after being treated at the St Jude Foundation hospital, specializing in childhood illnesses.

As part of his space project, Jared Isaacman is organizing a fundraiser for this foundation and it is to a donor who will be drawn that the seat of “generosity” will go. The billionaire announced that he would give his side 100 million dollars to St Jude, which is in addition to the sum – confidential – that he pays to finance the mission.

The last seat, which symbolizes “prosperity”, will be awarded to a person willing to start a business and able to explain “how she will change the world”.

The competition is open to residents of the United States over the age of 18 but does not require any unusual physical or technical skills, insists Isaacman. 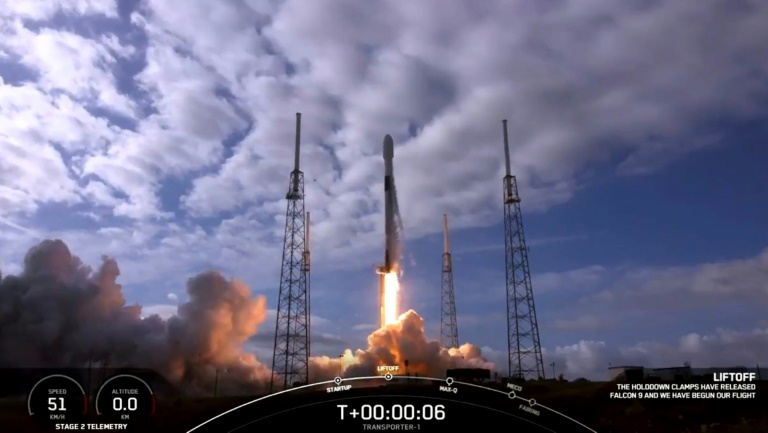 An image provided by SpaceX shows the launch of a Falcon 9 rocket on January 24, 2021 from Cape Canaveral, Fla. (SPACEX / AFP – Handout)

Elon Musk, the boss of SpaceX, “said it yesterday, if you’re able to go on a roller coaster that really shakes a lot, you should be able to fly in the Dragon capsule,” he laughs. .

The NASA astronaut selection process is so selective “that you are more likely to be struck by lightning” than to be selected but that is not the case here, insists the “chef de mission”.

The mission is slated to last for several days, and space tourists won’t just watch the scenery spinning in low orbit around Earth every 90 minutes. “We intend to spend a lot of time working on experiments,” on behalf of St Jude or other organizations, he explains.

At the end of the mission, the capsule will enter the atmosphere for a water landing off the coast of Florida.

Jared Isaacman then does not rule out sending other tourists into space: “If successful, there will be an incredible number of people who will take the opportunity to fly away and explore the stars. ! “

The many therapeutic benefits of CBD

The many therapeutic benefits of CBD