Although the high fire season is not yet over, preliminary tolls from fires in the European Union are rising, with more than 660,000 hectares already burned since January, a record this stage of the year since satellite data collection began in 2006.

Fires have destroyed 662,776 hectares of forest in the European Union since January 1, according to data updated on Sunday by the European Forest Fire Information System (EFFIS), which has maintained comparable statistics since 2006 thanks to satellite imagery from Europe’s Copernicus program.

France had its worst years in the 1970s, prior to standardized European data. But 2022 is the worst year in 16 years according to those numbers, due in large part to two large consecutive fires in the Gironde, in the country’s southwest, where German, Polish and Austrian firefighters arrived this week.

The situation is also exceptional in Central Europe: it thus took more than ten days for firefighters in July to put out the largest fire in Slovenia’s recent history, aided by a population so mobilized that the government had to ask residents to stop donating firefighters.

But without specialized firefighting aircraft, Slovenia was forced to seek help from Croatia, which sent a plane… before calling it back to put out its own fires. The Slovenian government is currently considering acquiring its first water bombers.

Also very spectacular, in Berlin, Germany, a large fire broke out last week at a police ammunition depot, in a forest in the midst of a drought, the fire was quickly brought under control. The German capital, which has so far avoided such fires, is now under increasing threat due to the importance of its forested areas.

But the Iberian Peninsula suffered the most from the fires. In Spain, dried up like France by several heatwaves this summer, 246,278 hectares were engulfed in flames, mostly in Galicia in the northwest. However, as the temperature dropped, the situation improved.

Portugal has also been battling a fire in the UNESCO-recognized world geopark in the Serra da Estrela mountain region for more than a week, culminating in an altitude of about 2,000 meters.

“Hopefully we won’t have the October we had last year,” he continues; Then, in one month, 400,000 hectares were destroyed throughout Europe.

These super-dry conditions have been more common in countries bordering the Mediterranean, but “this is exactly what happened in Central Europe” so far unaffected by these meteorological events, Jesus San Miguel adds. 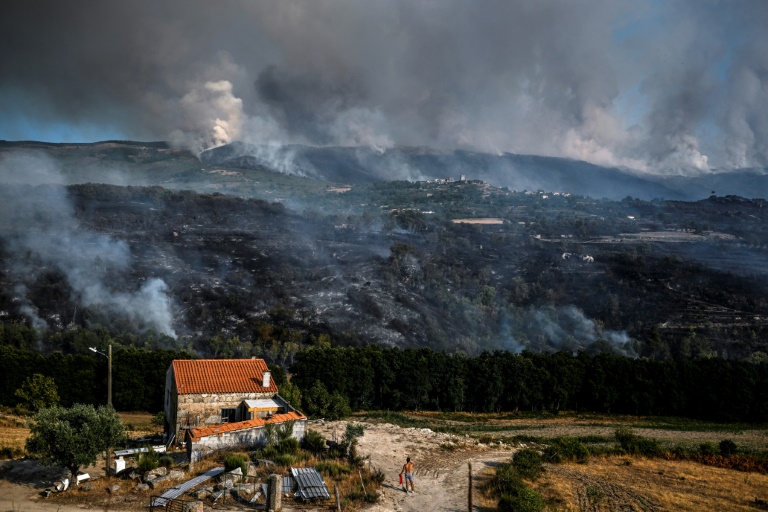 A resident watches the development of a fire in Linhares, Portugal on August 11, 2022. (AFP – PATRICIA DE MELO MOREIRA)

For example, in the Czech Republic, a fire destroyed more than a thousand hectares, which is not much compared to other countries, but … 158 times more than the average for 2006-2021, when fires were insignificant.

Thus, in Central Europe, the burned area is still small compared to tens of thousands of hectares in Spain, France or Portugal. In addition to the fires in Croatia, there were only three starts in Slovenia and five in Austria.

But continued global warming across Europe should only exacerbate this trend.