US dollar and yuan to watch this week

With the intervention of Fed Chairman Powell, US Core PCE and Non-Farm Payrolls, as well as rising Covid cases and unrest in China, the USD/CNH pair could be volatile in forex this week.

There will be plenty of US macro data this week and a speech by Fed Chairman Powell that should give markets a clearer picture of the possible direction of the Fed’s monetary policy. Powell speaks at the Brookings Institution on Wednesday. The subject is the economy and the labor market. A statement following the Nov. 2 FOMC meeting said that “we will take into account cumulative tightening, policy backlogs, and economic and financial developments in determining the pace of rate hikes.” The markets thought it was dovish. However, at the press conference that followed, Powell said that the incoming data indicated that the final rate level would be higher than expected. However, he also pointed out that the pace of the tightening is not as important as the final rate. The markets took it for a hawk! Forex traders will wait for Powell to clarify these statements and try to determine whether the Fed will raise 50 or 75 basis points at the December meeting. In addition, the United States will publish the Fed’s preferred inflation rate – Core PCE. Growth is expected at the level of 5% year on year against the September figure of 5.1%. If that number turns out to be stronger, the Fed could feel comfortable leaning towards a 75 basis point increase in December. The United States is also to release data on nonfarm payrolls on Friday. Circulation is expected to be 200,000, up from a previous value of 261,000. The unemployment rate is expected to remain unchanged at 3.7%.

As Covid zero restrictions and lockdowns heat up in China, so do the emotions of many Chinese. A weekend fire in Xinjiang that killed 10 people angered protesters who said the blaze was exacerbated by the zero-spread Covid policy. Riots and clashes with police erupted in some areas where protests took place, such as Shanghai and Beijing. The protesters are unhappy with the number of quarantines and restrictions. However, despite the shutdowns, Beijing has reported record levels of Covid. This could lead to even more quarantines and restrictions. WTI fell from a high of 82.51 on Nov. 23 to an intraday low of 74.02 on Monday as fears intensified over a lack of demand in markets. Will the coronavirus zero policy lead to a recession in China? Apple previously said that due to the Zhengzhou lockdown, the company expects a production shortfall of 6 million iPhone Pros this year. On Wednesday, China will release its official NBS manufacturing PMI for November, followed by Caixin’s manufacturing PMI on Thursday. Both should remain below the 50 expansion/contraction level. Traders will be asking the big question: “How much of a slowdown did the Covid Zero policy cause in November?” Traders will also try to assess how much the slowdown will affect oil demand ahead of the December 4 OPEC+ meeting.

The USD/CNH pair has been rising in forex since the end of February as it became more clear that the Fed would start raising rates in March. On May 13, the price peaked at 6.8375 before consolidating into a symmetrical triangle. However, on August 15 USD/CNH broke out of the triangle up and rose in a rising wedge as the price peaked at 7.3748 on October 25. It was also the highest level since 2007. The price then pulled back and broke the lower trendline of the wedge, reaching a breakout target (100% wedge retracement) near 7.0192. The USD/CNH pair has since been auctioned and widened on Monday, opening at 7.2308. 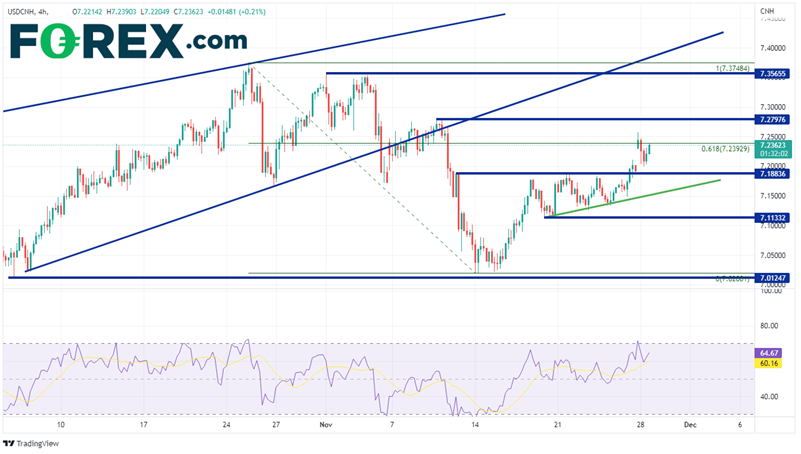 With the intervention of Fed Chairman Powell, US Core PCE and Non-Farm Payrolls, as well as rising Covid cases and unrest in China, the USD/CNH pair could be volatile in forex this week. Watch for aggressive moves in the pair if Powell’s speech or data paints a more hawkish picture ahead of the December 14 meeting.

Disclaimer: The information and opinions contained in this report are for general information only and do not constitute an offer or solicitation to buy or sell any currency contracts or CFDs. Although the information contained herein has been obtained from sources believed to be reliable, the author does not warrant its accuracy or completeness and shall not be liable for any direct, indirect or consequential damages that may result from anyone relying on such information.