With OPEC unchanged in oil production, what’s next for the USD / CAD forex?

As energy demand increases and OPEC supply remains constant, WTI and Brent oil prices are expected to continue to rise as the USD / CAD continues to decline in the currency market.

No wonder inflation is skyrocketing oil price. For reference, WTI oil was up over 9.5% in September and after 2 days of trading, it is up almost 5.25% in October! Earlier, Tokyo published its CPI, which often serves as a proxy for Japan as a whole. Tokyo’s year-on-year CPI in September was + 0.3% year-on-year compared to -0.4% in August, mainly due to higher energy and food prices. This was the first time that the reading exceeded 0% since July 2020. This has been seen around the world, as inflation in Europe last week turned out to be 3.4% year-on-year from 3% the previous month. .

Where could it end? The first resistance level is the 127.2% Fibonacci extension from the June 6 highs to the August 23 lows. Above is the 2013 low near 85.50 and then the 161.8% Fibonacci retracement of the same time period prior at 86.49. Note that the RSI is in overbought territory, an indication that oil may be ready for a correction. The first support is at previous highs of 77.07.

Brent oil looks the same as WTI, both trading at new highs for the year. However, unlike WTI, Brent traded at new highs of 86.61 in October 2018. Resistance beyond this level is at the 161.8% Fibonacci extension from the highs of July 6. to the August 20 lows near 85.67. There is also an ascending trend line from April 2020 that crosses near these levels. If the price breaks the 161.8% Fibonacci level, there is room for it to hit the November 2013 lows near 103.42! Note that, as with the WTI, the RSI is overbought, indicating that Brent may be ready for a pullback. The first support is at the September 28 high near 80.06.

The USD / CAD price formed an “evening star” candle from August 19-23, which is a reversal formation. This is because the price rose from a high of 1.2949 to 1.2493 on September 3 to the trend line support level, returning to July 5. The pair rallied from there, but failed to pass the August 20 high. This established what ended up being a head and shoulders pattern, which broke the neckline yesterday near 1.2600. The USD / CAD pair moved lower in the currency market with the increase in crude oil prices in the last four days. The goal for the head and shoulders pattern is the length from head to neckline, in addition to the neckline distribution. For the USD / CAD pair during the daily period, this level is close to 1.2295. 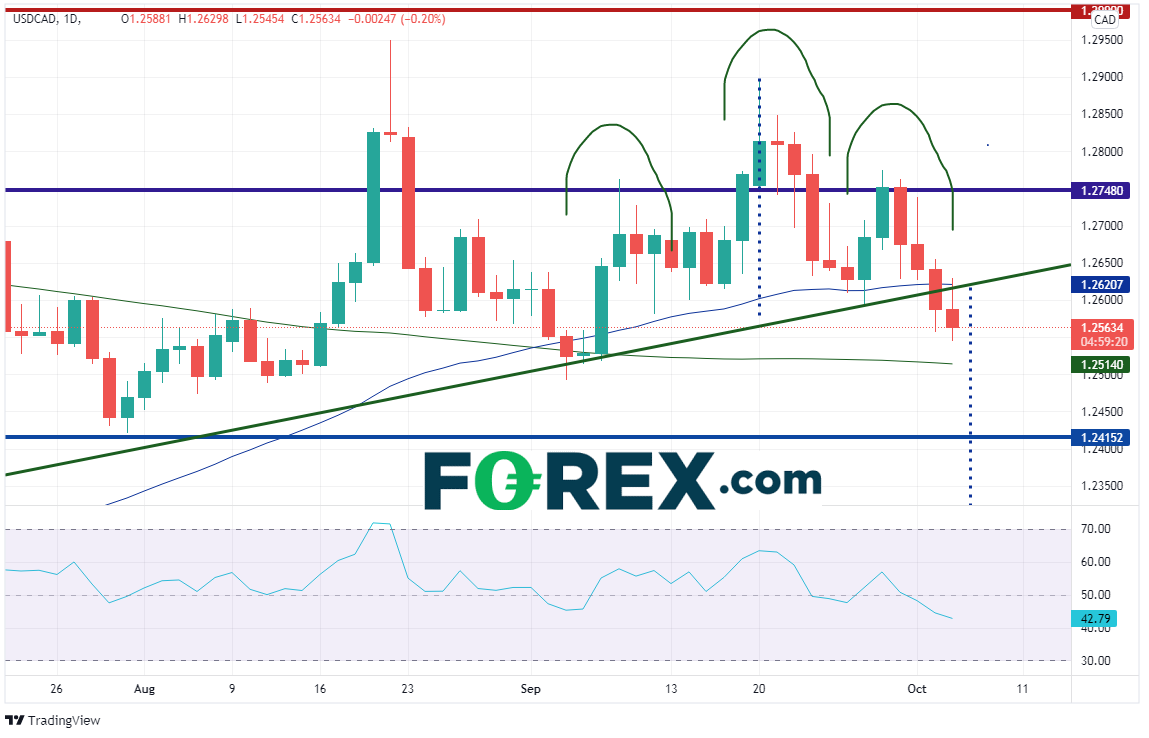 In addition to the head and shoulders pattern, we can see at the bottom of the chart that USD / CAD is highly correlated with WTI crude oil on the 4-hour chart. We consider any value above +0.80 or below -0.80 to be a strong correlation coefficient. In this case, the reading is -0.83, which means that USD / CAD and WTI Crude Oil have a strong inverse correlation. Therefore, over a 4 hour period, the two assets are mainly traded in opposite directions. Crude is currently in the middle of a support band between roughly 1.2480 and 1.2592. In this area, the pair is testing a horizontal level at 1.2259. If the price closes below, the price could expand to 1.2480. Next, the USD / CAD pair can drop as low as 1.2203 before reaching horizontal support. Given the directional correlation, if crude oil continues to rise, the USD / CAD pair should continue to fall in the currency market. However, if crude prices are on the verge of a correction as suggested by the RSI, short-term resistance is the 50-day moving average at 1.2620 and today’s highs at 1.2630.

As energy demand increases and OPEC supply remains constant, WTI and Brent oil prices are expected to continue to rise. If this happens, the correlation between the USD / CAD pair and the price of oil should continue to increase as well. However, keep an eye out for a short-term correction as the RSI is in overbought territory. With continued demand, the bulls will seize any opportunity they have to buy bears, which means that the USD / CAD pair should offer if there is a bounce.

Disclaimer: The information and opinions contained in this report are provided for general information only and do not constitute an offer or solicitation regarding the purchase or sale of currency exchange contracts or CFDs. Although the information contained in this document has been taken from sources considered reliable, the author does not guarantee its accuracy or completeness, and does not assume responsibility for any direct, indirect or consequential damages that may result from the fact that someone trusts such information.