USD/JPY will be in the spotlight this week.

After the meeting of the Bank of Japan, the USD/JPY pair can become very volatile in Forex!

The December CPI report last week showed that inflation in the US continues to decline. Print media slowed down from 7.1% y/y in November to 6.5% y/y in December. It was the sixth consecutive monthly decline since July’s peak of 9.1% year-on-year. In addition, the core consumer price index, which excludes food and energy, rose from 6% to 5.7% year on year. However, traders decided to focus on the MoM report, which showed an actual decline of -0.1%. This was the first negative reading experience since May 2020!

Recall that the average hourly wage for December was lower than previously expected. This data started to reduce the US dollar, and the consumer price index helped it to continue the current decline. On Tuesday, the United States released its first regional production data along with the NY Empire State Manufacturing Index for January. The print was terrible: -32.9 vs. expected -9 and -11.2 in December.

However, there is more data coming out of the US this week, including PPI, retail sales, industrial production, the NAHB Housing Market Index, the Beige Book, the Philadelphia Fed manufacturing index, housing starts and sales of existing homes. A significant breach of expectations in any of these releases could cause volatility in the markets.

The focus of Japan this week will be the Bank of Japan meeting on Wednesday. Recall that at the December meeting of the Bank of Japan, the committee expanded the range around the 10-year JGB from -/+25 bp. up to -/+50 b.p. While Bank of Japan Governor Kuroda said this is not a quantitative tightening, traders are betting that this could be the beginning of the end of central bank yield curve control (YCC). Some even speculate that the BOJ may end the YCC program at this week’s meeting.

On Friday, Japan is to publish data on the consumer price index for December. Shares are expected to rise year on year from 3.8% in November to 4.0% in December. Kuroda continued to argue that the current rise in inflation is temporary, but traders are not biting and are buying up the yen for the next meeting. Watch out for a jump in forex volatility around the yen pair if the BOJ doesn’t adjust policy at the meeting (traders expect a sort of QE).

USD/JPY has been rising in forex for most of last year, reaching a 2022 high of 151.95 as the Treasury intervened in the foreign exchange market to try to strengthen the yen for a second time.

Since then, the pair has been moving down in a normal channel with several big moves down as the price hit the upper trend line of the channel. The USD/JPY broke the channel last week, recording a false break as traders started buying the yen on Thursday in anticipation of a less dovish BOJ decision this week. Often, when price makes a false breakout on one side of a pattern, it moves to test the opposite side.

USD/JPY continued its intra-channel pullback this week, stalling at the 61.8% Fibonacci retracement level from the Jan 2022 low to the Oct 2022 high at 128.17. In addition, on Friday, the 50-day moving average crossed the 200-day moving average, forming a death cross. The cross of death signals the expectation of a fall in price.

On the 4-hour chart, the price of the USD/JPY pair returned inside the long-term channel (green lines). On a shorter timeframe, the price formed a falling wedge. The price is expected to break to the upper side of the wedge as the price nears the top.

If the price rises, the first resistance is at the confluence of the upper channel trend line and the upper wedge trend line near 130.00. Above this level, the price could move towards the horizontal resistance at 131.31 and then the falling wedge peaks at 134.50.

Note that the last two times USD/JPY moved towards the lower trend line of the wedge, the RSI was oversold and the price rebounded. This indicates that there may be more room for price to drop before the RSI becomes oversold (and the price is poised to bounce).

The first support is at the confluence of the horizontal support and lower wedge trend line near 126.35. However, below this level, the price may fall to the lower trend line of the long-term channel around 122.65. 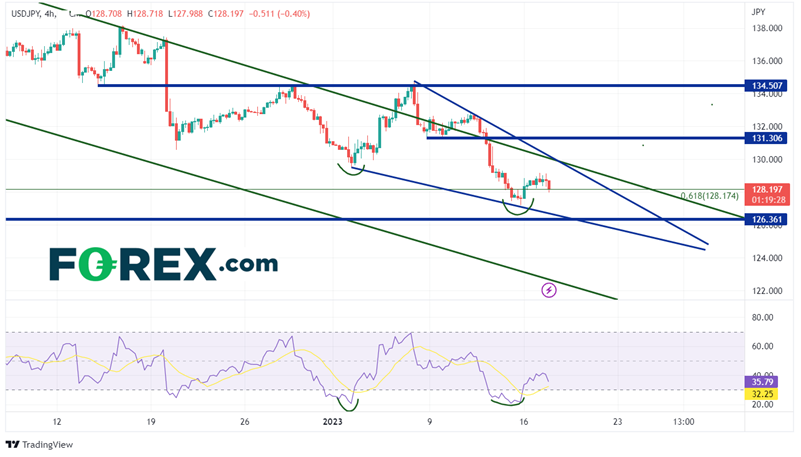