The price of natural gas has turned parabolic and it is possible to profit from it in the currency market through the USD / RUB pair.

Natural gas (NG) is booming lately. On December 28, 2020, NG hit a low of 2,238. Since then, prices have risen by nearly 150%, including an increase of nearly 50% in the last month alone. Uncertainties about Russia’s ability to deliver enough natural gas to Europe this winter persist as Nord Stream 2 could be delayed due to lingering concerns in Germany. Natural gas (and electricity prices in general) rose due to a fire at a UK power station, which shut it down (increasing demand for alternatives, such as natural gas). Also, add a hurricane and tropical storm in the United States, which shut down a liquefied natural gas (LNG) plant, and BOOM, a recipe for higher prices. Of course, the RSI is in overbought territory at 84.37, but the RSI is not a useful indicator when the price is moving in a parabolic fashion.

* Note that the correlation coefficient compares direction, not width.

On a daily basis, the USD / RUB was trading in a symmetrical triangle since the pandemic highs of March 2020. In early May 2021, the price finally broke below the lower trend line of the triangle near 74.20 and reached a low of 71.55 on June 11. , before bouncing and retesting the lower trend line of the triangle. In doing so, the price formed a smaller symmetrical triangle in early July (green). The price fell below this triangle on August 31 near 73.25.

Over a 240 minute period, after the USD / RUB broke below the smaller symmetrical triangle and moved lower, it retested the lower trend line near 73.50 on September 7 and failed. The pair is now testing horizontal support at the September 3 low near 72.55. Note that the USD / RUB has formed a smaller descending triangle. The target for a descending triangle is the height of the triangle added to the breakdown, which is close to June’s horizontal support near 71.53! However, the pair must first cross the Fibonacci extension at 161.8% from the lows of September 3 to the highs of September 8, near 72.00. Intraday resistance is at the channel’s downtrend line near 72.91, today’s highs near 73.37, and September 8 highs near 73.53. 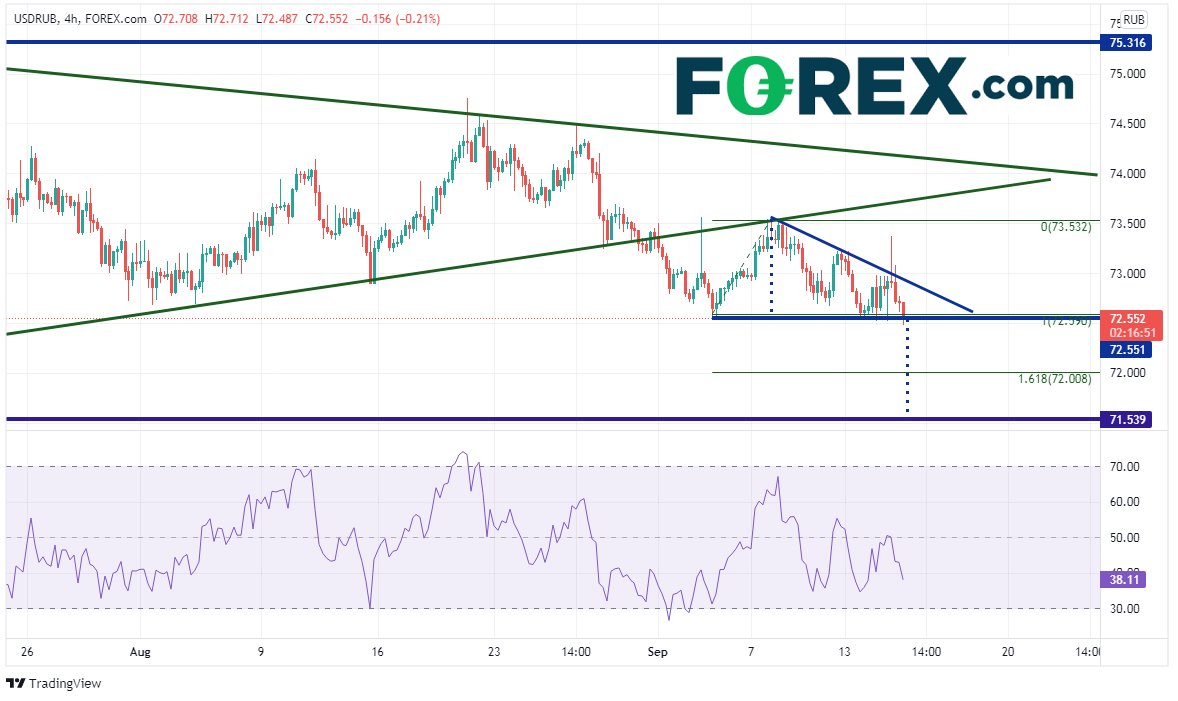 Natural gas has been on the rise since the beginning of the year and now appears to have turned parabolic. Due to its strong negative correlation with the USD / RUB pair, currency traders could look to profit from the movement through this currency pair.

Disclaimer: The information and opinions contained in this report are provided for general information only and do not constitute an offer or solicitation regarding the purchase or sale of currency exchange contracts or CFDs. Although the information contained in this document has been taken from sources considered reliable, the author does not guarantee its accuracy or completeness, and does not assume responsibility for any direct, indirect or consequential damages that may result from the fact that someone trusts such information.