After experiencing the driest July ever recorded, France woke up on Tuesday to a third summer heat wave that picked up and intensified in the country’s south, making the effects of global warming more and more visible.

“A heat wave episode is confirmed mid-week centered on Wednesday and Thursday with maximum temperatures of 34 to 38°C and locally 40°C,” Météo-France reported on Monday evening.

As a result, the four departments in the southeast (Ardèche, Drôme, Gard and Vaucluse) and the Pyrenees-Orientales remain on high alert. Fifty other departments south of the line from Charente-Maritime to Alsace are on yellow alert.

“A warm peak is expected on Wednesday with maximum temperatures most often reaching 34-38°C, and in places between 39 and 40°C at noon in Toulouse,” Météo-France clarifies, before the heat axis shifts to the northeast on Thursday .

In this context, already contributing to unprecedented wildfires, the fire devastated “at least 200 hectares” of maquis in the town of Santo Pietro di Tenda in Upper Corsa on Monday, a firefighters spokesman told AFP.

In another illustration of the negative impact, Ardèche announced on Monday the emergency installation of six air conditioners at an orphanage in Privas, which has been “suffocatingly hot” for “weeks”, the community said in a press release.

This new heat wave promises to be shorter and less intense, Météo-France specifies, than the one in mid-July, when absolute records were broken in 64 municipalities, flirting with or even exceeding 40°C in several localities. 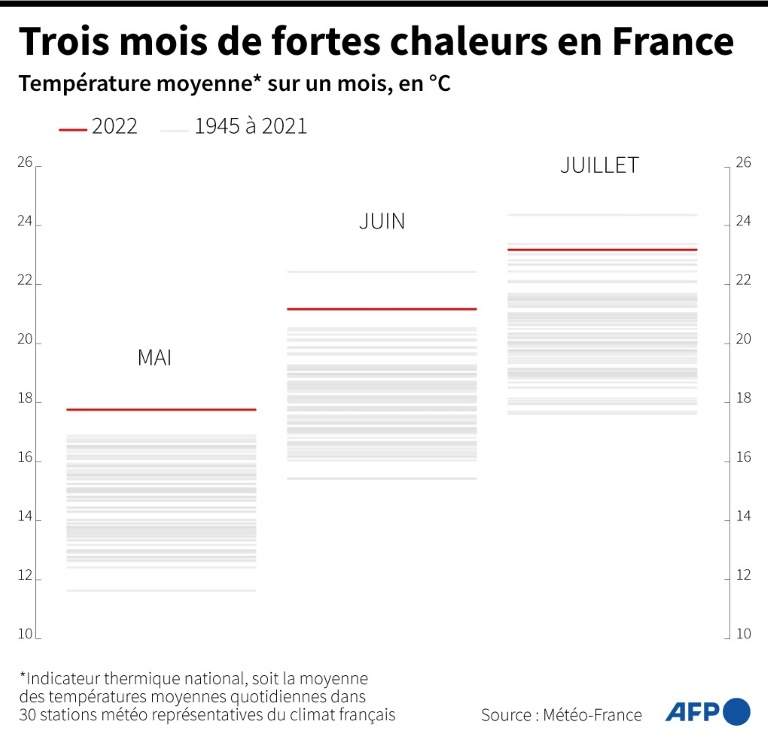 But this rapid return of heatwaves has hit much of the country, already hit by an exceptional drought, with immediate repercussions, in particular, on agriculture, river transport and water recreation.

Last month, only 9.7 millimeters of cumulative rainfall was recorded on the French mainland, a deficit of about 84% of the norm, almost as small as 7.8 millimeters in March 1961, a record low since the first national surveys in August 1958.

“This severe rainfall deficit, which follows a very dry spring and combined with high temperatures, is contributing to the drying up of the soil,” warns Meteo-France.

On Monday, prefectural decrees continued to impose water restrictions at various levels in all or part of the territory of 93 of the 96 metropolitan departments.

Only Paris, Hauts-de-Seine and Saint-Saint-Denis are still on the sidelines at this stage, while 57 prefectures have designated territories in crisis, synonymous with the end of non-priority direct debits, including direct debits for agricultural goals. “.

Western Europe faced a historic drought in July and two heatwaves in just a month that ignited devastating wildfires like the Gironde, Spain or Greece.