Portrait. Tristan Franconville has only been Dieppois for a few months and yet his knowledge of the city’s history is highly erudite. When video games lead to the buccaneers’ route.

Tristan Franconville will write comics on the History of Dieppe buccaneers. (Photo PN)

Tristan Franconville will write comics on the History of Dieppe buccaneers. (Photo PN)

There are plenty of sailors’ graffiti on the eight columns of Saint-Rémy church. The Dieppe Churches Protection Committee under the leadership of Tristan Franconville is planning a night of graffiti hunting in an attempt to list them. (Photo PN) 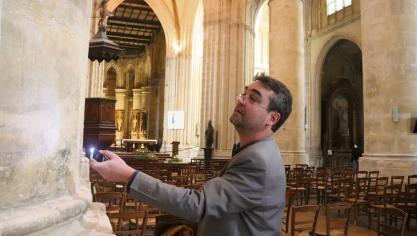 Historian and researcher but above all self-taught, soon to be an entrepreneur in publishing, Tristan Franconville upsets the codes. After a scientific baccalaureate and several first university years experimenting with different disciplines, his historical scholarship is almost fortuitous. He began to take an interest in the universe of Norman pirates at the end of the 90s through the role-playing games he consumed in high doses. “I was considering creating one on the theme of buccaneers and buccaneers from Dieppe. I am interested in the legends of pirates and I get in touch with Pierre Ickowicz, the curator of the castle-museum of Dieppe, who opens the library to me. I had already vaguely heard of Jehan Ango, but I did not yet know any details of Dieppe maritime history. “

From history to video games

This point of departure towards the past will have no return! A few more years passed when his readings enriched a mass of increasingly precise knowledge, accumulated for pleasure. Then in 2009, he went to England with the nerve, hired by a video game company as a game master. “My mission is to unlock players stuck in the adventures of Lord of the Rings. But I was spending too much time discussing the script with them. I am fired after a year. “ Back in Rouen, he decides to take his time and attend conferences of local learned societies. “I go there as a tourist and I talk to academics. It is one of them who advises me to do a validation of the acquired experience. I find myself enrolled in college for a master’s degree in History. “ His research subject: the dieppois allocates in the 17th century. These “allocated” or “hired” are artisans or workers, who by contract put themselves at the service of rich shipowners and sailed to Africa or the Antilles to maintain trade: ivory, sugar, tobacco passed through our quays. Dieppe was then a major port of globalization.

For more than twenty years he has been digging through archives and old papers, Tristan Franconville has been looking for a solution “To make money with history”. Because he asserts that real events are scripted much more powerful than any universe created for entertainment. The sagas Star wars and Game Of Thrones Watch out, the adventures of Dieppe buccaneers are coming soon … in comics (read below).

As a passionate, Tristan Franconville also maintains, as a speaker, the transmission of his knowledge to the local public. Last September, he led the visit to the tower of Saint-Jacques church during Heritage Days. And, in the Saint-Rémy church, he unearthed with the Committee for the Protection of Dieppe Churches many sailors’ graffiti. “In the climb to the right of the organ, halfway up, we see engraved a boat typical of those of the buccaneers. And between each column, lists of engraved names that I suppose to be those of sailors, because Saint-Rémy was the church of departing captains. “ With Tristan Franconville, Dieppe history is dusted off and becomes incredibly alive.

1999. Passionate about video games and role-playing games with historical scenarios, he imagines creating one on the theme of buccaneers and buccaneers from Dieppe.

2009. He is working in England as a game master on a video game adaptation of Lord of the Rings.

2013. He obtained a master’s degree in History at the University of Rouen.

2020. He joined the Committee for the Protection of the Churches of Dieppe and moved to Dieppe.

Tristan Franconville will draw on the true stories of Dieppe buccaneers to write the screenplay for a comic strip whose number of volumes is still imprecise.

He has at least one trilogy in mind to begin with. The decor will be partly set on rue de la Barre in the hostel “La Coste de la Baleyne” where the Dieppe captains lingered before their departure to sea. “An expedition of 1666 is well documented in notarial acts studied in the papers of Le Ber, abbot of Veules-les-Roses between 1920 and 1950 who had started to sift through the awarded contracts of the 17th century. There is an entire inventory of the paraphernalia of the buccaneers who went to Turtle Island (Haiti and Santo Domingo today). “

Last October, during the comic book festival in Dieppe, Tristan Franconville convinced the designer Guy Michel, known for his work on the terras-novas of Saint-Malo, to work on the illustration of his long-term story. “I have the first scenes which are ready, I have to prepare the scenario for him in comic book script format” of which he could have the first sketches at the beginning of the year 2021 to hope for a release of the first album at the end of the year. At the same time, he must also work on the creation of his publishing house which will ensure the manufacture and marketing of his books.