A young man from Liège wanted to sell his laptop computer for 1600 euros via the Internet, but fell victim to an unusual scam. The alleged buyer made the transfer in front of him… on a fake bank statement. Is this a new scam? How to protect yourself from this?

Gaetan is quite familiar with the methods of scammers … but this time he got caught. Surprised by the scam he was the victim of, he decided to press the orange “Warn Us” button to draw attention to this unknown technique.

Wanting to sell his computer for 1,600 euros, Gaetan took advantage of Market Place, Facebook’s online sales platform. Very quickly, a Dutch user responded to his announcement: “He asked me all the questions to see if the computer worked well, if he could contact me again, if there were any problems. Everything seemed fair,” says the young man. from Liege.

A meeting date is set, but the buyer warns Gaetan that he wants to pay by bank transfer: “I said I prefer cash because I don’t want to be fooled. He told me, “No, you don’t have to.” worry, you can take a photo of my transfer account and take a photo of my ID.” On the day of the meeting, everything goes, a priori, according to plan: “He made the transfer in front of me, even hid his phone a little when he dialed his so-called secret code.”

“I didn’t even know it existed”

Days pass, but the expected 1600 euros do not come. Despite repeated reminders, the Dutchman no longer responds and ends up blocking Gaetana on Facebook. Asking, he realizes what happened to him: “In fact, everything was a fake! I didn’t even know it existed. It was a fake banking application in which he generated a fake transfer. was done,” Gaetan regrets.

The victim says that the application used by the thief looks like a real one: “The scam is so well designed that there is even a false history with other payments. Everything is done to mislead, it’s amazing.” 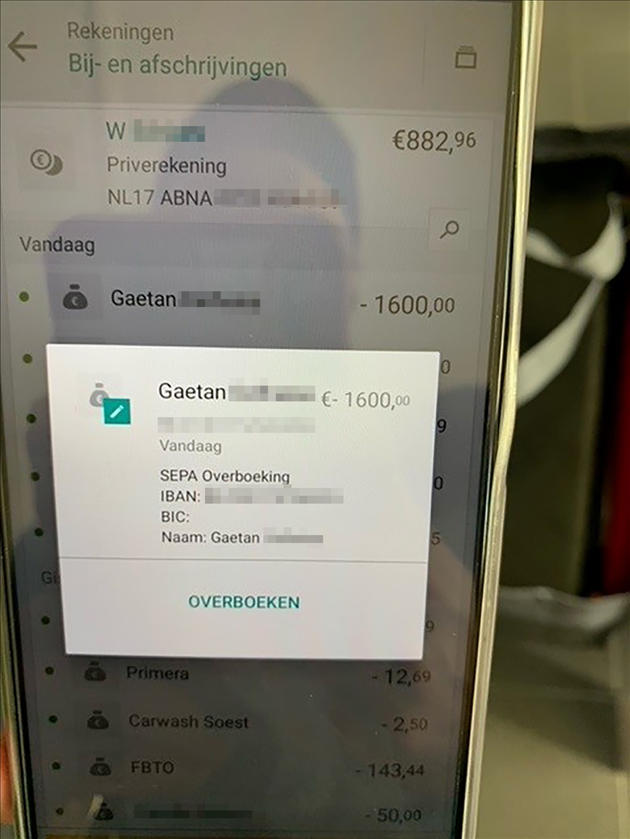 The scammer’s bank account number doesn’t actually exist, but the same IBAN appears in online reviews: “Last Saturday, a boy bought me a laptop and transferred money through his app, the money still hasn’t arrived in my Belgian bank account. When will I receive your money? wrote a Dutch-speaking person. With regard to the identity card taken in the photo, Gaetan assures that, after verification, it does not match the man he met.

In the middle of the move, Gaetan and his companion get into trouble: “We are young, we needed money. 1600 euros is more than a monthly salary for me. Today today I no longer have a computer and I no longer have the money to buy a new one,” he laments. His first reaction was to go to the police station, where he was told that the chances of finding the person who lied to him were minimal. That’s why Gaetan decided not to file a complaint.

To find out more, we contacted the authorities. This new method is not yet known to either the federal police or the Federal Penitentiary Service for Economics, but it exists: the Dutch bank that was usurped quotes it on its website. According to the Federal Computer Crime Unit, these fake apps may come from the dark web, that is, from this underground and anonymous internet where completely illegal things happen.

You must be very careful. There are very simple ways to prevent this.

The scam is not widespread, according to Febelfin, the Belgian Financial Sector Federation, but it can be protected against: “You have to be very careful. There are very simple ways to prevent this. . We recommend instant transfer. After a few seconds, the transfer is carried out. There is certainty there, since everyone checks on their phone if the transfer has arrived, and we can be sure that we are not s. Sometimes there is a payment surcharge, but some banks include it in their package. Others don’t, but it’s just a few cents,” explains Rodolphe de Pierpont.

There are other means such as Payconiq. This application generates a QR code that the buyer must scan. However, this method is limited to €250 for payments between individuals and €1,500 for merchants. Finally, Gaetan was right, because in such cases, the best option is to pay in cash.

People deceived in this way have only one option: “You should go and complain to the police, because it is punishable. This is the use of forgery, because the application is fake, and theft, there are two criminal offenses,” concludes Rodolphe de Pierpont.

Although it is difficult to find the perpetrators of these actions, filing a complaint will establish a link between similar cases and initiate an investigation.