The German streaming market experienced sustained growth in 2020 as paid streaming revenue rose from 2.3 billion euros in 2019 to 3 billion in 2020, an increase of 28%. According to Goldmedia, the pandemic and the launch of new offers were the key factors in the sharp rise in VOD consumption by German households.

2021 will not see a pause, as the increase is expected to be 25% to reach the record figure of 3.8 billion euros. Goldmedia underlines that the revenues of SVOD services exceed those of pay channels and that they approach those of TV advertising. As in all European countries, SVOD achieves the highest turnover at 2.5 billion euros, or 83% of the total. As a reminder, the turnover of SVOD in France in 2020 is 1.2 billion euros. The TVOD and EST market reached 500 million euros in 2020 and should continue to grow in 2021 to reach 700 million euros. By passing the 3 billion euros mark in revenue in 2021, SVOD is taking control of the German audiovisual market while the large German groups have still not succeeded in countering the American streamers.

2020 was a watershed year for SVOD streaming in Germany, as the number of subscriptions reached unprecedented levels. The increase in the German SVOD market is not exclusively due to the arrival of new subscribers, but above all to the addition of new subscriptions by existing subscribers. In 2021, the average of two subscriptions will finally be exceeded and the trend is towards three subscriptions per subscriber. This means that for most SVOD subscribers, a third offer will be taken out in addition to Amazon Prime Video and Netflix which have shared the market until now; Disney + is in the best position to do this. According to Goldmedia, there are therefore more than 25 million active SVOD subscriptions in Germany. 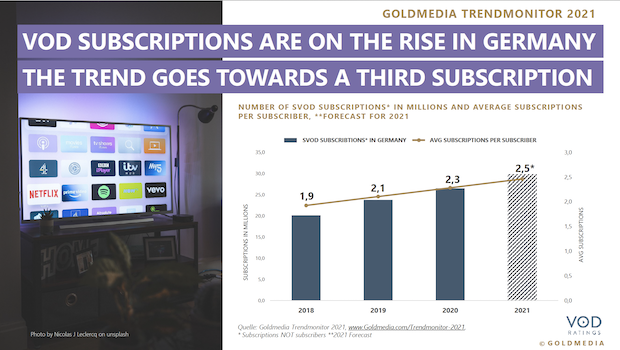