8.9 million activations in the third quarter

HBO Max achieved 8.9 million activations in the third quarter of 2020 compared to 4.14 in the second quarter, bringing WarnerMedia’s OTT service to 28.7 million subscribers. 25.1 million HBO Max users result from WarnerMedia’s distribution agreements with Comcast, DirectTV, Hulu, Charter, Verizon knowing that HBO Max has still not reached an agreement with Amazon’s Roku and Fire mobile devices which represent most of the American park. The balance of 3.62 million subscribers corresponds to direct subscribers to the platform, up 650,000 in the third quarter. Several media emphasize that AT&T figures should be read with caution: indeed AT&T highlights the quarterly activations of its streaming service, but the majority of these activations are linked to an HBO subscription (via their Pay TV subscription or mobile) for customers who have not yet registered for HBO Max and therefore have not activated and watched programs on the SVOD platform. 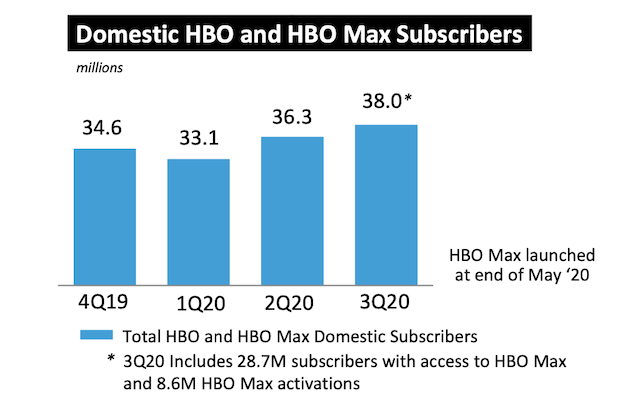 AT&T CEO John Stankey gave some details about his plans to develop in the VOD market. In a market ultra dominated by Netflix, in a domestic market hit hard by COVID-19, John Stankey has confirmed the upcoming launch of an AVOD offer “Given the relatively high price of $ 14.99 per month for an HBO Max subscription. The new service will not be free and will not broadcast advertising around the original HBO programs. “ The AVOD offer will concern the American market initially, but the boss of AT&T specified that HBO Max should see an acceleration of its international deployment in 2021.

HBO Max, OCS and the international

The question of the international expansion of HBO Max arises for France. Last February, Stéphane Richard, CEO of Orange declared: “The contract with HBO expires at the end of 2021, so we will start discussions. Our exclusivity with HBO is our great strength. I cannot prejudge decisions, I do not yet know what its future international distribution will be. “ Since then, OCS boss Serge Laroye has left, replaced by Christian Bombrun, Director of Products and Services for the operator and of Orange Content. At this stage, it is difficult to make predictions about a future partnership between OCS and WarnerMedia.

If WarnerMedia agrees to waive the big MG (guaranteed minimum) paid by Orange in order to be able to standardize its international distribution strategy for HBO Max, there is little chance that the agreement will be renewed. But with its 3 million subscribers and its distribution agreements with ISPs, OCS also has a strong argument: if the service closes, the 3 million subscribers will evaporate in nature, no doubt on competing platforms, especially since there will no longer be Game of Thrones to retain them.

The French VOD market exceeds 1.1 billion euros in revenue at the end of September

A second Swiss encryption company was piloted by the CIA

The French VOD market exceeds 1.1 billion euros in revenue at the end of September

A second Swiss encryption company was piloted by the CIA