Briefly about the week 09.05. News about bitcoin and cryptocurrencies is in constant turmoil. It can happen that important information gets lost in the daily information flow and you miss important moments. This format is meant to fix that. We return to last week’s Hebdo Crypto news to keep you up to date with the current situation with cryptocurrencies.

Briefly about the news of cryptography

▶ Poolin is temporarily suspending withdrawals due to a liquidity crisis. Indeed, one of the world’s leading mining pools is struggling to cope with the recent increase in withdrawal requests.

▶ Wasabi and Trezor join forces to fight censorship. The two organizations have announced a partnership to offer Coinjoin transactions to Trezor wallet users.

▶ Merge launched, Bellatrix activated in beacon chain. Bellatrix marks the first of two steps that enable the deployment of the Confluence. The hard fork was successfully completed on September 6th.

▶ Binance enters zk-Rollups with zkBNB. BNB Chain developers have announced the launch of their own zk-Rollup solution on the test network.

▶ The turmoil around Celsius is always full. Indeed, the company is suspected of lying about its financial statements since 2021. In addition, she was engaged in manipulating the price of the CEL token.

▶ Although Vitalik Buterin theorized them, Binance was the first to launch Soulbound tokens. This will allow you to manage the identifiers associated with the addresses.

▶ On the occasion of Surfin’ Bitcoin, the Journal du Coin teams were able to speak with developer Abdelhamid Bakta.

4 indicators of the week

➤ 300,000 is the number of Optimism (OP) tokens that will be sent out to 1inch users. Thus, the 1inch protocol will distribute these tokens to users of the protocol at level 2 Optimism.

➤ $265,000 is the amount stolen in the attack on KyberSwap. In practice, this attack was aimed at a flaw in the application’s front-end. This was introduced using the Google Tag Manager service.

➤ $370,000 is the amount stolen from the Nereus Finance protocol on Avalanche. In fact, the attacker carried out a price manipulation attack using instant credits. 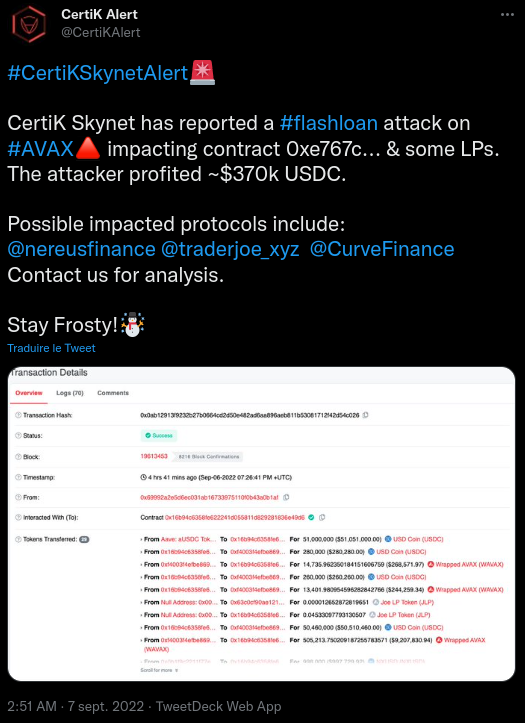 Nereus Finance was the victim of an instant credit attack – Source: Twitter

➤ 225 million TH/s, this is the Bitcoin hash rate. This will almost exceed the previous ATH set at 230M TH/s.

The tweet of the week is from @From0to10k and his thread about a common Twitter scam: fake “solidity robots”. You know, the famous “Why isn’t anyone talking about this?” tweets. which hundreds of bots publish every day.

For several days, many bots have been scouring with a “great” tutorial to make $700 a day with a #Solidity bot.

Of course, do not think that you can make money with such a technique, even if it worked before. pic.twitter.com/0qA8zbKjS5

Have a great week at Journal du Coin! 🙂

Don’t be fooled by messages that promise you easy wins. Investing is a winding road littered with pitfalls. For your safety, choose a reliable and reliable partner. Register now on the PrimeXBT platform (commercial link).