Sandy Munro, a well-known American automotive consultant, took cell 4680 apart from a Model Y battery made in Texas and then opened it up to see what it looks like inside. In addition, he filmed the whole thing on video, which was posted on his YouTube channel Munro Live.

The cylindrical shape and large size cell, as we all know, is one of Tesla’s most exciting innovations and has set new standards in lithium-ion batteries so much so that many manufacturers are working on a product with equivalent specifications.

The Munro Live video begins with all the elements of the 4680 airframe, which has already been completely disassembled, lying on the table. So the two protagonists of the film, Cory Steuben and Antonio Dinunno, begin to analyze the various components in order to understand the internal architecture and manufacturing methods of this product, which chemically retains the formula NCM 811 (nickel-cobalt-manganese). To do this, they also used a number of technical cuts provided by Kinetic Vision.

Analysis of the cell confirms a number of characteristics already claimed in the past. First of all, a rather thick steel outer case, made strong enough to contain cell volume changes during charge and discharge cycles, and because these cells are inserted into the battery, which, as has been repeatedly mentioned, performs a structural function.

Between novelty and certainty

Inside, there are two flower-shaped copper and aluminum disks, which are connected respectively to the anode and cathode (which retain the traditional chemical composition). This is an unparalleled technical solution requiring different manufacturing processes for both assembly and welding. 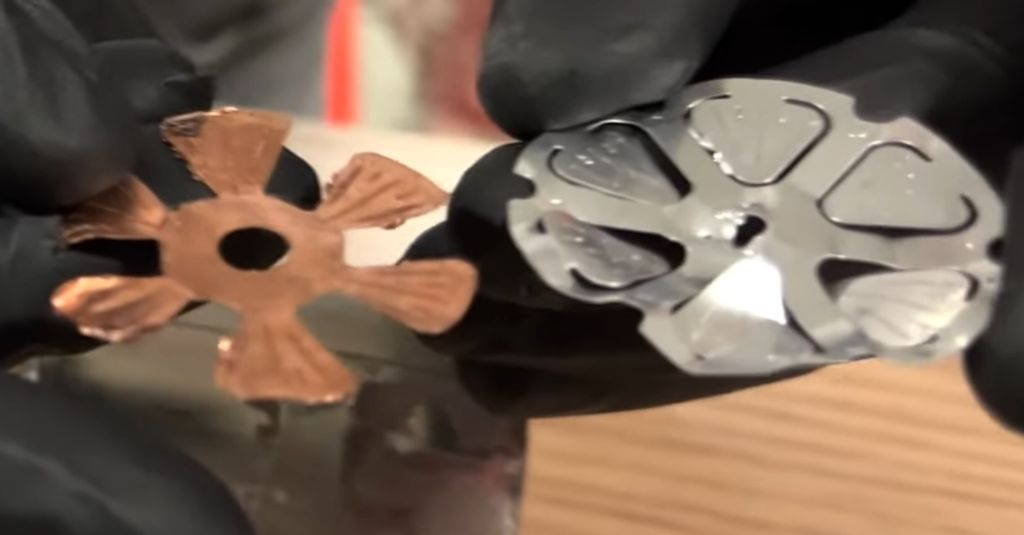 Among the basic elements of the 4680 cell, we find the classic jelly roll, consisting of two electrodes and a separator, which are arranged in sheets superimposed on each other and rolled into a spiral, which is then immersed in the electrolyte. According to the protagonists of the video, this 4680 cell will be one of the first to be released and may represent some kind of preliminary version of this product, which Tesla will definitely finalize over time.

The 4680 cell is currently only produced in limited quantities, precisely because it requires fine tuning of the lines, which no one has yet been able to achieve. Apart from Tesla, LG Energy Solution, Panasonic, Samsung SDI, Bak Battery, CATL and EVE Energy are also trying to create a similar product. Among the manufacturers most actively using this type of technology are BMW, which recently announced the transition to cylindrical elements in 2025, and NIO.