Whether in telephony or computing, mastering the renovation of terminals is one of the levers of action, because the carbon impact of a terminal is not linked only to its use, but also to its use, to its manufacture. Therefore, extending the useful life of terminals is generally the # 1 or # 2 action of all CIO green plans., because they are full of electronics, they are full of rare earths and metals. Extending their useful life means that the limited natural reserves of these materials will be less mechanically depleted. Recycle them also at the end of their life.

In France,Arcep, in the context of the 2020 anti-waste bill for a circular economy, published a report 3 months ago on the effects of the renovation. This report is full of data. We learn, for example, that 81% of digital greenhouse gas (GHG) emissions in France are linked to all digital terminalsWhether they are smartphones (11% of total digital broadcasts), but also televisions (23%) and laptops (14%). Precisely, Arcep also points out that its field of regulation is reduced given the scale of the task ;-) 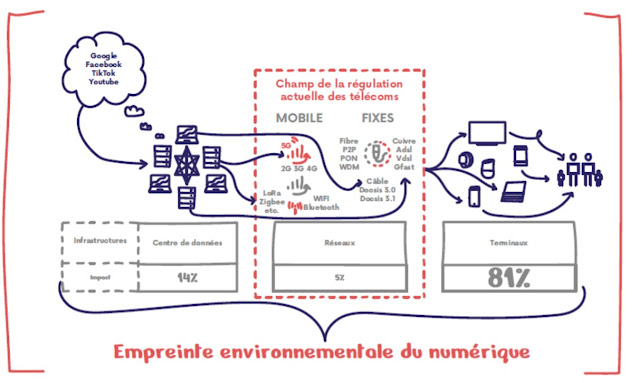 Finally, the production of new equipment represents 75% of the impact, while the use during the entire period of use represents only 25% of its total footprint. Therefore, it is of course that we must act first in manufacturing.

In this context, GreenSI Therefore, I had asked myself two months ago in a post about the release of Windows11 next October, which in its communication in no way addressed the ecological impacts or benefits on the planet of this decision, which would mechanically accelerate the renewal of millions of PCs whose configurations will not be able to support this new OS.

Today GreenSI wonders about cell phones. The report of theArcep analyzes the reconditioned terminals sold and emphasizes that the market is concentrated in a small number of terminals, “mainly high-end terminals and mainly produced by the Apple and Samsung brands”. Therefore, Apple devices retain a high use value for a long time.

Everyone agrees that Apple’s speech on September 14 was “soft” and without major announcements. At least just a year after the announcement of the iPhone 12, which was the first to support 5G, the iPhone13 seems to be a slight improvement on the latter, however without going to a standard USB-C port that would have avoided multiplying transformers. But as fans follow the brand in its very close versions, Apple seems to want to accelerate an already very fast pace of renewal …

After flipping the question around for a few weeks, GreenSI concludes that Apple missed its last keynote.

In fact, in the context of GHG production described above, GreenSI wonders if the best decision for Apple was ultimately not DO NOT advertise the iPhone13 and take up the battle for the planet. After all, the number 13 brings bad luck to the superstitious and the lifespan of iPhones no longer needs to be tested, as Arcep reminded us. Then why Apple did not take the opportunity to trust the unconditional commitment of its customers to use a product that does not have any technical limitation for another year, regardless of the latest models.

Therefore, Apple could have announced that to help the planet, they postponed the launch of the iPhone until October 2022!

Then, in October 2022, it will launch a new iPhone 14, much more innovative, about which it would have something to talk about. The decision to omit the number 13 would have become a sign of commitment to the planet, perhaps later copied by high tech, and the absence of the number thirteen became a permanent nod to Apple’s environmental vision. The iPhone 12 would have continued to do the job of attracting new customers, at an equivalent price. There we would have thought positively of his “Think Green, Think Apple” campaign.

The american bank Morgan Stanley, He believes Apple will break records in its fiscal year 2022, although others doubt an iPhone13 sales level as strong as No. 12 (it sold 100 million copies in 7 months). In any case, We are talking about tens of millions of iPhones replaced faster than necessary, and we have seen that this is not good for the planet.

So now all that’s left are the actors from the second life and recycling, like the French dynamic. Secondary market to save the planet by preventing others from buying new smartphones and recycling the replaced iPhone too fast. You can still buy the refurbished iPhone 11 on www.backmarket.fr, announced by Tim Cook just 2 years ago.

It is true that Apple has not been noticed so far for its environmental policy, whether due to the repairability of the iPhone, the planned obsolescence for which Apple had to pay 500 million euros last year, or the changes in the connectors of the chargers that force Europe to advertise. measures this month and force Apple to switch to USB-C.

After 10 animations of this blog, I am flattered to be proposed by Silicon.fr in the contenders for the price of “IT Manager of the Year 2021“. If you enjoy this blog and it helps you take a step back, encourage him to continue voting for 10 more years! : Read profile or vote directly

See you soon on this blog