It’s been over two years since Microsoft hung up on us with Windows 10X and Surface Neo. If Neo isn’t officially dead yet (he wouldn’t be the only Neo resurrected), Windows has, however, evolved. Today, other Windows PC manufacturers are working on dual-screen notebooks that offer different versions of the Microsoft concept.

In fact, with a Core i9 processor and a powerful integrated Nvidia RTX graphics processor, the ASUS ZenBook Pro Duo offers the kind of power one expects from a modern workstation. However, it would only be a simple workstation if it did not have the feature that is missing from other mobile PCs intended for creative professionals: a second screen.

This screen, ScreenPad +, is a high-resolution OLED touchscreen that sits between the main screen and the keyboard, across the device. Despite its odd appearance, it has offered the most significant differentiating feature in a laptop in years. A feature that easily overshadows the arrival of the Yoga or Surface 2-in-1s.

The foot of the timelines and music tracks.

On a laptop like the Duo Pro, which is designed to accommodate applications with multiple palettes or pop-up interface components, ScreenPad + offers a convenient solution to download the interface. Adobe Premiere Pro is a good example, as it is possible to extract the panel from the timeline and move it to the ScreenPad +. Its short and wide shape is ideal for working with timelines or music tracks in digital audio workstation software. 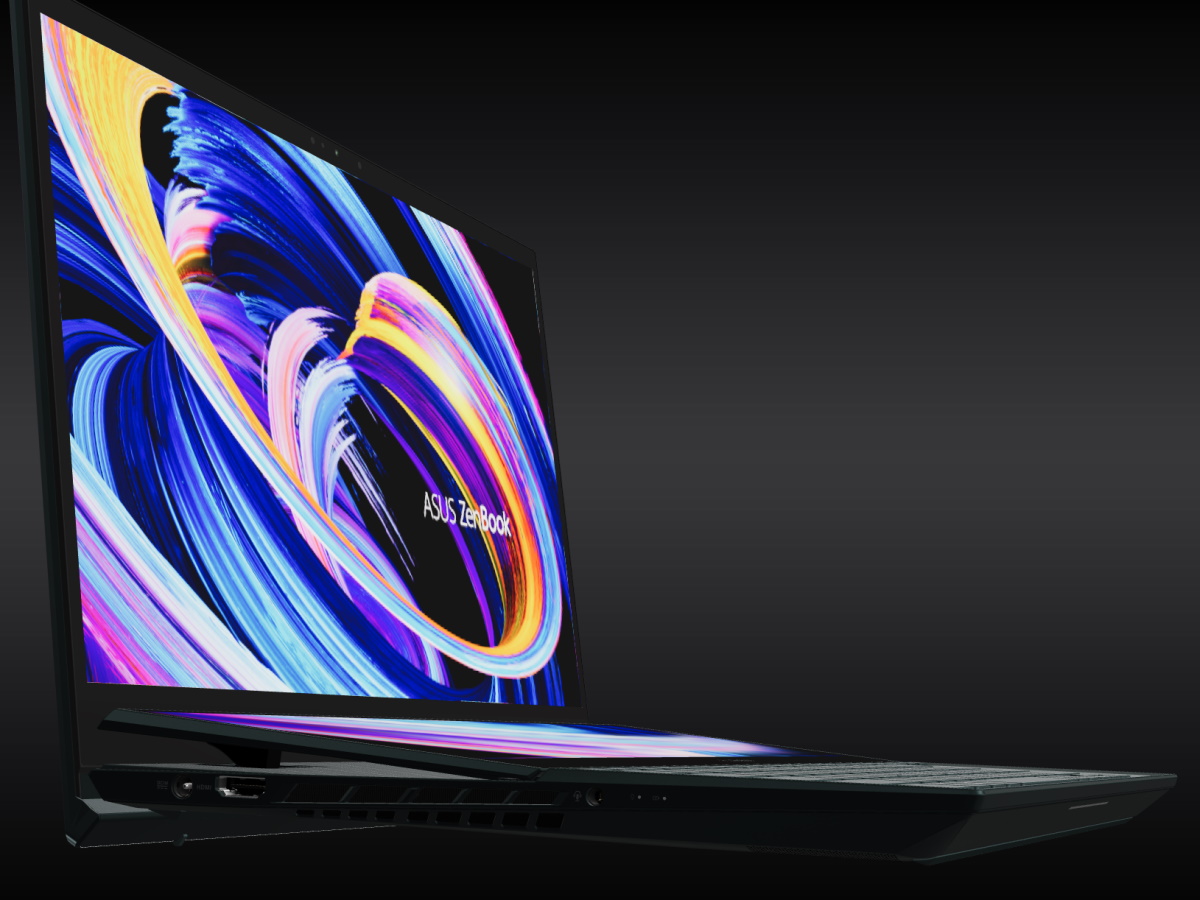 But even for those who work with less dynamic media, the ScreenPad + comes in handy. Editors searching online, for example, can take advantage of the main screen to group multiple web pages together, while keeping some paragraphs visible in a word processor on the second screen. Students can also include a note-taking app on the bottom screen. And those who don’t need the power of the ZenBook Pro Duo can choose the smaller, less expensive 14-inch ZenBook Duo.

The ScreenPad + doesn’t offer as much additional workspace as a second full-size screen placed next to the laptop. But what it lacks in terms of display area, it makes up for in design and functional integration. It’s easy for any Windows application that supports multiple windows to find use in ScreenPad +. Asus has also developed window enhancements that allow multiple windows to be docked on the second screen.

This utility must be justified; the additional display forces the most significant ergonomic design change since the first PowerBooks pushed the keyboard up from the bottom of the cover to accommodate the trackball (and, later, the trackpad). Taking advantage of the width of the machine, the ZenBook Pro Duo moves the trackpad to the right of the keyboard and adds an optional illuminated keyboard.

And other improvements are possible. First, even with Asus’ smart hinge that raises your ScreenPad + when you open the laptop, the viewing angle is still a bit low for extended work. Asus offers an additional stand that attaches to the bottom of the laptop to raise it further, as well as a palm rest designed to compensate for the lack of lift in front of the keyboard. But these accessories make the experience more painful.

While the viewing angle could be improved, a lower ScreenPad-like display would cause problems on smaller laptops. That said, as laptop screen ratios return to larger ratios such as 16:10 and 3: 2, it would be worth the inclusion of a second screen (the size of which falls between Apple’s Touch Bar ( now discontinued) and the ScreenPad +). By reducing the size of the trackpad it has reached a point of diminishing returns.