This article is taken from the monthly journal Sciences et Avenir – La Recherche No. 903 of May 2022.

With the conflict in Ukraine, the question has become acute: can we do without Russian gas (which accounts for 17% of French imports)? In the context of the presidential elections, the whole question of national energy independence arises. And, few people know this, but this one is quite possible on gas. Because in France we don’t have oil, but we have…waste that we can recycle to supply the network with biomethane.

Thierry Oublier, Managing Director of GRTgaz, who manages the national distribution network, does not hesitate to talk about the “third gas revolution”: “In the 19th century, urban gas was produced in coal plants in the heart of the French agglomerations. “In the 20th century, it became cheaper to import natural gas from Norway, Algeria or Russia. With biomethane, we are returning to local production, which is completely independent of geopolitical vagaries.”

And this French gas is already a reality. Digestors that decompose organic matter by bacteria are swarming in rural areas (see infographic below). In 2021, 6.4 terawatt hours (TWh) of gas was pumped into pipes at 365 sites and mixed with the fossil gas stream. This is just over 1% of the 474 TWh consumed last year in France. But in 2015, production was zero and more than 1,000 projects are under study, so 19 TWh will be added in the next two to three years. “In 2030, we must reach 20% of national consumption and achieve independence in 2050,” says Thierry Oublier.

Reasonable optimism as the price barrier is lifted. While in 2010 the price of m3 of natural gas was less than ten euros per megawatt hour (MWh), the price of biogas peaked at 95 euros. The recovery of the economy after the coronavirus and especially the war in Ukraine has changed the situation. This spring 2022, natural gas costs more than 100 euros. Finally, this target is all the more achievable as natural gas consumption is expected to drop sharply to 320 TWh in 2050.

Why gas demand will decrease

If gas consumption drops from 470 to 320 terawatt-hours (TWh) in thirty years, this is due in part to the electrification of needs. In response to the fight against climate change, gas heating, which is installed in a third of individual houses and half of apartment buildings and offices, will gradually give way to heat pumps, and the industry will be forced to decarbonize. If the total energy consumption in France increases from 1600 TWh today to 965 TWh thanks to technological progress and energy conservation policies, electricity consumption will increase from 430 to 645 TWh in 2050, thus covering 55% of the demand compared to 25% today. As for fossil fuels, which currently provide 60% of consumption, they will practically disappear by the middle of the century.

The deposits that can be used for biomethane production are significant due to animal waste, crop residues, certain energy crops, or crops planted between two crops. 230 plots are owned by single farmers and 79 by groups of farmers. Added to this are sludge and by-products of processing plants and animals in the agro-food industry, by-products of slaughterhouses, household waste, green waste, sludge from municipal sewage treatment plants. “If we use all this potential wisely and do not compete with capacity, we can reach 130 TWh in 2050,” Thierry Trouvout calculated. Ambitious, but not enough. “We are fortunate that the technologies being developed are demonstrating their relevance,” says Anthony Mazzenga, Director of Renewable Gases and Hydrogen at GRTgaz.

Their names are: pyrogasification, hydrothermal gasification, methanation. What exactly? With pyrogasification, we leave the realm of biology and move on to the realm of combustion. It consists in burning solid waste in an oxygen-depleted atmosphere. This leads to the formation of a mixture of gases, most of which is methane. Raw material? “These are the remains of the logging and woodworking industries, as well as end-of-life consumer products such as furniture, fabrics, rags, foams, material blends,” Anthony Mazzenga lists. These wastes, collectively known as “solid recovered fuel” (SRC), are currently mostly landfilled or incinerated. And only 300,000 tons of CSR and MSW are currently being exploited, while the deposit is estimated at 2.5 million tons per year.

Thus, the actors are very different from the actors of methanization. In the process of establishment, the sector brings together local authorities responsible for the collection of municipal waste, environmental organizations that manage contributions to finance selective sorting, and large material recycling operators (Veolia, Suez). Since 2018, in France, an industrial pilot Gaya, managed by Engie, has been testing a kiln in Saint-Fonds (Rhone) that processes wood from the packaging sector, as well as olive pits, almond shells, bark, non-edible straw. , with the idea of ​​selling turnkey units to seasoned players. In March, Ecomobilier, the organization in charge of financing the collection and recycling of furniture, and Syctom, the recycling association for the municipal waste of Paris and inner suburban departments, signed a memorandum of understanding with GRTgaz to recycle solid recovered fuels through pyrogasification. , waste paper from sorting centers in the city and waste from treated, varnished or painted wood. “Currently in France, about fifteen industrial pilots are preparing for the development phase,” comments Anthony Mazzenga. 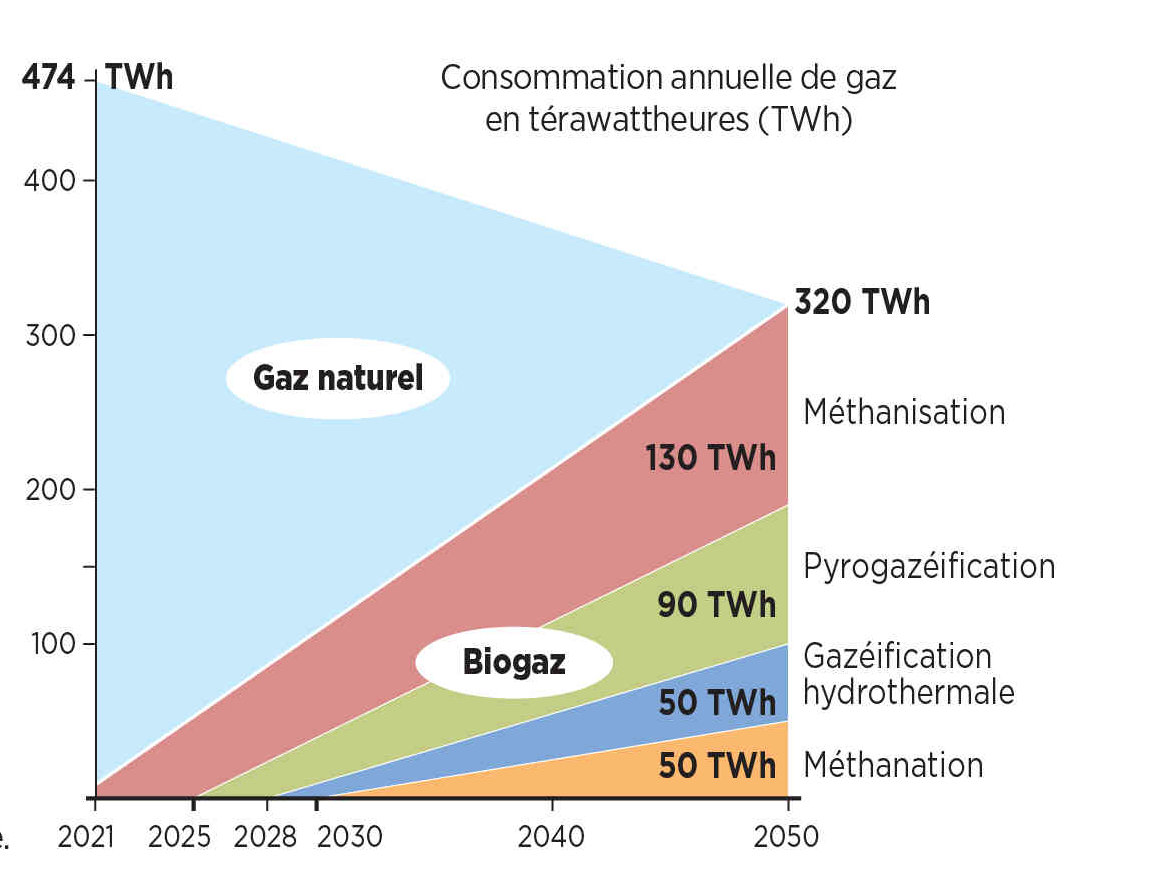 By 2050, biogas will be able to replace all natural gas. The development of anaerobic digestion, combined with three other innovative technologies, should allow France to do without natural gas, especially from Russia.

For hydrothermal gasification, the field consists of wet wastes such as organic effluents from the agro-food or paper industries, sludge from sewage treatment plants, and in general all methanization digestates that cannot be distributed to agricultural land. The process, which consists of combustion at 250 bar and 400°C by pyrolysis or 700°C in an oxygen depleted atmosphere, is well established, but the transition to industrial experience has just begun. The world’s largest demonstrator is located in Alkmaar (Netherlands) with a capacity of 16 tons per hour.

Finally, gas companies have high hopes for methanation. This time without loss. The idea is to use hydrogen, which can either be injected directly into the grid or used to produce methane by reacting with CO2 captured in a nearby plant’s chimney. A reaction requiring a large amount of electricity, the origin of which must be renewable. “It’s a way to use the energy generated in excess on days with strong wind or strong sunlight,” notes Anthony Mazzenga. This electricity has been supplying electrolyzers in Fos-sur-Mer since 2020 as part of the Jupiter 1000 project.

With such a set of solutions, gas companies have no doubt that independence is quite achievable. With strong political will, this could happen even well before 2050. Especially since the IPCC (Intergovernmental Panel on Climate Change) mandate in its April 4 report is to cut greenhouse gas emissions this decade. “We are at a crossroads. By making the right decisions today, we can ensure a decent future. We have the tools and know-how to limit global warming,” said Hoson Lee, President of the IPCC. And among these tools, the acceleration of the “third gas revolution” comes to the fore.

Opponents of the anaerobic digestion sector mention the risks of accidents or even explosions, truck traffic, water pollution by the spread of digestates. The accident at Châteaulin (Finistère) in August 2020, when 400 m3 of digestate polluted the river Olne, highlighted the risks of this activity. Since 2016, government services have recorded 70 incidents, all less serious, and their number tends to decrease as operations increase, according to the Union for Renewable Energy Sources (SER). It also depends on the application of the quality mark and the progress contract intended for the operators.