Bitcoin hit a new high last week with a market capitalization of around $ 1.3 billion. How far will it go?

Our readers are likely to agree on one point: the theoretical value of bitcoin seems impossible to assess. No earnings to apply a multiple to, no dividends to calculate your return, no net assets to establish a book value. The valuation of bitcoin and other cryptocurrencies is one of the most controversial and complex aspects of this asset class. Here we highlight some of the most used techniques to try to estimate the theoretical value of bitcoin. They are also part of the methods discussed in the crypto assets guide written by the very serious CFA Institute.

For many investors, bitcoin is increasingly positioning itself as an alternative to gold as a so-called “non-sovereign” store of value. Bitcoin is also very often referred to as “digital gold” or “gold 2.0”.

Therefore, one of the most used approaches to value bitcoin is to compare its market capitalization with that of gold. At the current price of around $ 1,800 an ounce, the total stock of gold (already mined from the ground) stands at around $ 12 billion.

Another bitcoin valuation model has been proposed by Chris Burniske, a crypto researcher and partner at the venture capital firm Placeholder Ventures, and Jack Tatar, a managing partner at Doyle Capital, in a book called “Cryptoassets: The Innovative Investor’s Guide to Bitcoin and Beyond “.

Industrial metals have little or no scarcity characteristics, which explains an even lower stock-to-flow ratio.

Burniske and Tatar based their work on the quantity theory of money. This theory was developed by Irving Fischer, an American economist in the early 20th century. It establishes a cause and effect link between the quantity of money in circulation (M) and the general price level (P). It also takes into account the speed of money circulation (V) and the volume of products exchanged during a given period (Q).

The equation at the base of this quantity theory takes the following form: M × V = P × Q.

In the CFA Institute study, this equation is adapted to cryptoassets as follows:

The unknowns P and Q, of course, play a key role in solving the above equation. Of course, they can vary considerably. But for those who believe in the virtues of this model, the increasing adoption of bitcoin as a currency could mean an increase in the price of bitcoin. For comparison, the cumulative number of transactions made through Visa, Mastercard, and UnionPay in 2020 was around 450 billion.

Three years ago, a mysterious Dutch institutional investor named Plan B tried to model the value of Bitcoin. When first released on March 22, 2019, the model predicted a rapid rise in the value of bitcoin to $ 55,000 after the May 2020 “halving” passed (this is the division by 2 of the amount of bitcoins paid to bitcoin miners for their work). At the time of Plan B’s first launch, bitcoin was trading below $ 5,000. Needless to say, most observers did not take this study seriously. However, these predictions turned out to be correct. Since then, Plan B has continued to periodically update its estimates online. And the statistical significance of the model is worrying.

Plan B bases its valuation of bitcoin on Stock-to-Flow (SF) or “stock-flow” in French, a quantitative model based on the scarcity of assets. Stock-to-Flow divides the reserves of a resource (the “Stock”) by its annual production (the “Flow”). Therefore, the model measures the annual or additional marginal supply in relation to existing reserves. The higher this ratio, the less supply is renewed and, therefore, the more the resource or asset in question can be considered “scarce”.

The valuation of an asset requires taking into account its volatility.

The SF is generally applied to precious metals, such as gold. Current gold reserves (the “stocks”) are estimated at around 190,000 tonnes. The “Flow” corresponds to the amount of gold mined each year, which is approximately 3,200 tons. Dividing the total supply by the “Flow”, we get a ratio of ~ 59. This tells us that at the current production rate, it would take about 59 years to extract 190,000 tons of gold.

Silver comes next with an SF of 22. Palladium and platinum, on the other hand, have SF slightly above 1. Industrial metals have little or no scarcity characteristics, which explains an even more stock-flow relationship. high.

Bitcoin is the first digital asset that cannot be copied, duplicated, hacked, or tampered with. When it was launched in 2009, its developers stipulated in the protocol that the production of Bitcoin would be limited to 21 million by 2140. The current supply is around 18.5 million and the production of new bitcoins is cut in half every four years. .

Today, there are less than 0.4 bitcoins available per millionaire on the planet. This ratio is expected to decline as the number of millionaires grows faster than the number of new bitcoins put into circulation. Bitcoin is therefore the first “rare” asset that can be transferred digitally.

Given the scarcity properties of bitcoin, the stock flow model appears to be applicable to bitcoin in the same way that it is applicable to precious metals.

Bitcoin currently has a “Stock” of around 18,500,000 tokens and a “Flow” of 330,000 / year, giving us an SF of 55.9. Before the May 2020 halving, the SF of Bitcoin was 25. The SF was even lower than a few years ago. Bitcoin SF should now continue to rise for years to come due to the upcoming halving. In terms of scarcity, Bitcoin is already comparable to gold, but over time Bitcoin will become an even rarer resource than gold.

Plan B hypothesized that scarcity, as measured by SF, has a causal relationship to the value of an asset. As mentioned above, high SF metal caps are significantly higher. On this basis, “Plan B” built a statistical model on gold, silver, and Bitcoin. A linear regression shows a statistically significant relationship between SF and the value of these assets since the coefficient of determination is 95%. Simply put, it is highly likely that the more scarce a resource is, the greater its value.

The graph below shows the theoretical price of bitcoin according to the stock flow model. Therefore, the estimated capitalization of Bitcoin after the May 2020 halving was $ 1 trillion, or a Bitcoin price of $ 55,000. A goal that was reached in February of this year. The same model predicts that the price of Bitcoin is expected to hover around $ 130,000 by the end of this year. And much more in the years to come … 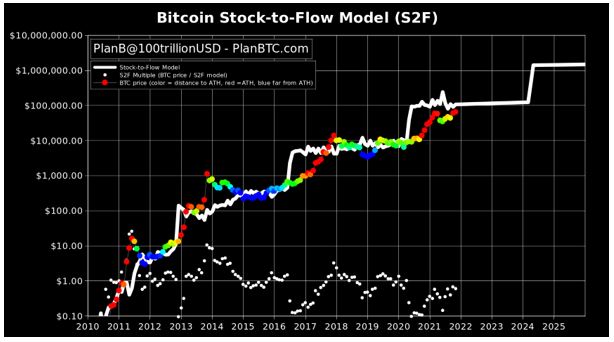 However, the predictability of the model must be put into perspective. Certain factors: hacking of certain exchanges, possible ban of Bitcoin by certain government authorities, etc. – are not taken into account by the model and could influence the price of Bitcoin. The valuation of an asset requires taking into account its volatility. Bitcoin’s is still very high and is not taken into account in the model. It should also be remembered that Bitcoin has only been around for ten years and that more data is needed to give credibility to the “Stock-to-Flow” model.

There are many models for evaluating the theoretical value of bitcoin, but they all have their limitations. Remember also that if we must consider bitcoin as a currency, it could be that the most important point is the credibility of bitcoin as a standard of values, an instrument of exchange and finally a store of value. As Adam Smith said: “All money is a matter of faith” …