Linux Mint is one of the most popular Linux distributions at the moment. Why ? Thanks in part to Cinnamon’s easy-to-learn interface. It works flawlessly on PCs that don’t support Windows 11. The OS is also fast, secure, and works well. However, upgrading from one major version to another can be tricky. If you still want to do it, here is a step by step guide.

First of all, a few clarifications. This update is not recommended if you have never used the Linux command line. While it only takes a few clicks to switch from one minor release to another, Mint 21 doesn’t make a “major update” that “could take hours.”

First, launch the update manager. The latter should run automatically on a one-time basis, but if you’re not used to updating, you may need to wait a few minutes before you move on to the next step.

While you’re at it, also back up your system and files with the backup tool. Since we’re talking about a system-wide update here, back up your software in addition to your personal data. So if something goes wrong, you can always roll back.

Then use Timeshift to create an image of the system. You will be able to restore the system in case of problems.

Download the Linux Mint 21 ISO image and install it on a USB drive with at least 4 GB capacity. This way, if your computer no longer boots with Mint 21, you should be able to boot from this USB drive. Once your computer is up and running again, you can run Boot Repair to fix the boot sequence.

If that doesn’t work, reboot from your key and start Timeshift. This program will scan your drives for system images. Once you find the image you just created, you can restore your computer using the system image. You will then revert to the previous version of Mint.

But enough warnings and precautions. After installing many Mint updates, we never had a problem. So it’s time to start updating.

Prepare the machine for installation

The first step is to open a terminal. Yes, we have to use some shell commands to update. Don’t worry, no big deal.

The first command ensures that your computer will use the most recent files for your update. The second command installs a program that will manage the update itself.

Then start by typing:

That’s it for shell commands. Not too difficult? 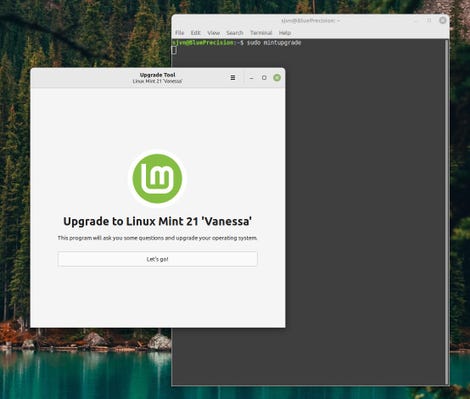 The update tool is designed to be as simple as possible. Ideally, you only need to press a few buttons and you’re done.

Be careful, the update may take time, “several hours” even according to the developers. But if you have the latest hardware and a good internet connection, it won’t take you more than 45 minutes.

However, in our case, the process did not go smoothly. The update tool found several orphan programs. They weren’t really orphan programs per se, but software installed outside of the native Debian/Ubuntu/Mint repositories. 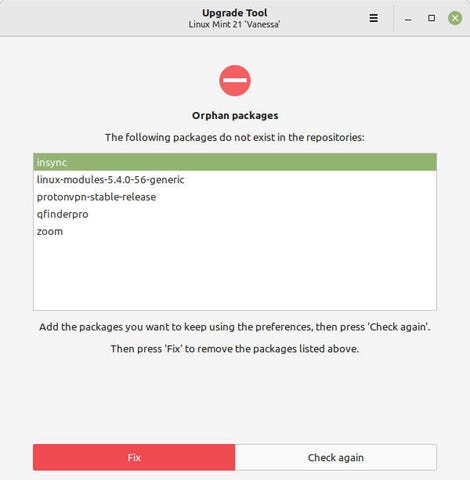 On our test machine, we installed Insync, a program that syncs Google Drive, OneDrive, and Dropbox with a Linux desktop, ProtonVPN, QFinder Pro (a utility for QNAP NAS), and Zoom. 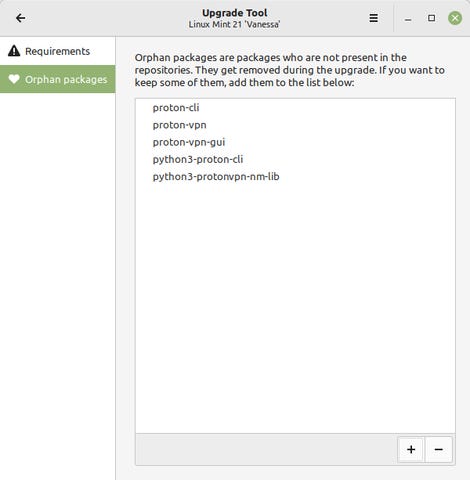 The update software asked us what to do with these packages as they are unknown to the system. Unfortunately, in order to save them, you will have to manually enter the name of each lost package in the settings. A particularly painful process for programs like ProtonVPN, which depend on five different packages.

As the Linux Mint maintainer explained, this step is “mandatory” because it is “a leading cause of failed upgrades.” I just wish the interface was more ergonomic.

However, after completing this step, the software update did not cause us any problems.

Is the process worth it? In short, yes. Mint 21 is much more efficient and faster than version 20.3. We’ll cover this version in more detail in our next test, but we can already tell that it’s an improvement over the previous version.

Why Use Linux Mint?

It’s simple because it’s a secure, easy-to-use, and elegant operating system that individuals and companies can use for free.

Why should you use Mint and not Arch? Debian? Ubuntu?

All Linux distributions have their pros and cons. We chose Mint because it’s easy to use and suitable for people who are already familiar with Windows, which is pretty much everything. The only exception are companies that need to manage a fleet of computers. In this case, it is better to use Red Hat Enterprise Linux Workstation, SUSE Linux Enterprise Desktop (SLED), or Ubuntu Advantage. All of these solutions benefit from an assistance program designed for companies.