New for fans of large diagonals: Huawei is expanding the S line by 16 inches with the MateBook 16S. Successful conversion? The answer is in our test.

Ah Huawei, the famous computer manufacturer. At least, this seems to be the plan of the Chinese brand, which, after being exiled from the world of smartphones, is trying to find the smell of holiness on the PC. And so far it has succeeded: by offering very good configurations with timeless design and fair prices, Huawei has been able to easily find its place in this ultra-competitive market. Huawei MateBook 16S is a newcomer to the S line, which so far only supports 13 and 14 inches. Will he be able to convince like his brothers before him?

If you are already familiar with the style of Huawei computers, this will not surprise you. The MateBook 16S continues to be a laptop built into a solid metal block with a very slight magenta sheen. We are almost on the border between MacBook and Surface. Thus, the overall design follows the rounded lines of the former, while the 3:2 aspect ratio is rather relative to the latter. However, don’t worry: the construction is solid and the charisma is timeless. 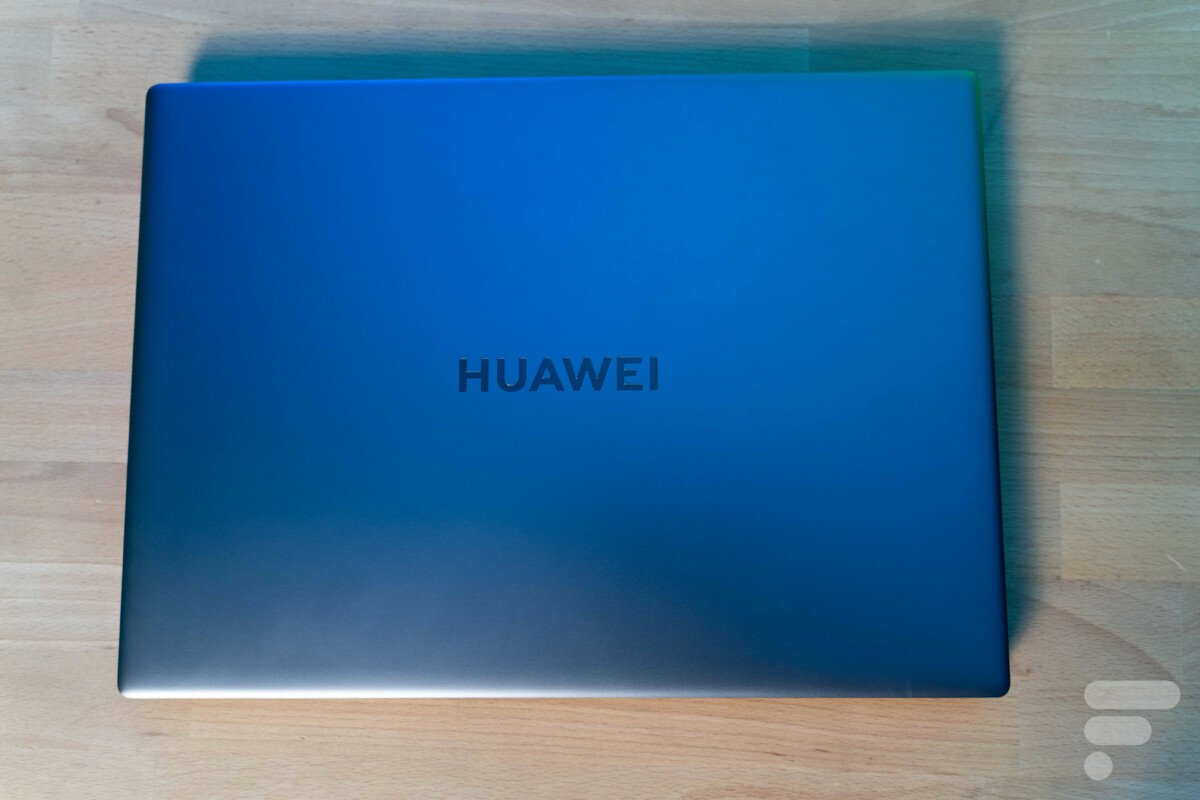 Finally, the most striking feature of this design is the giant mirrored Huawei logo flowing onto the back of the device. The manufacturer seems to really want all passers-by and the curious to know at a glance who you are buying from. It’s not very discreet, but it doesn’t get in the way either; it’s just noticeable. Its 2kg weight might also be a bit of a disappointment, at least compared to other offerings like the LG Gram 16. It remains respectable, however, considering its diagonal.

Land re-conquered on the side of the keyboard. If you’ve ever touched the keyboard of an ultraportable PC released in recent years, you’ll quickly recognize the lightness and rebound of the keys. Most notable are their size and the distance between them; Huawei MateBook 16S decided not to integrate a numeric keypad, which is usually found on 16-inch models. We also took advantage of this absence to attach speakers to the sides. 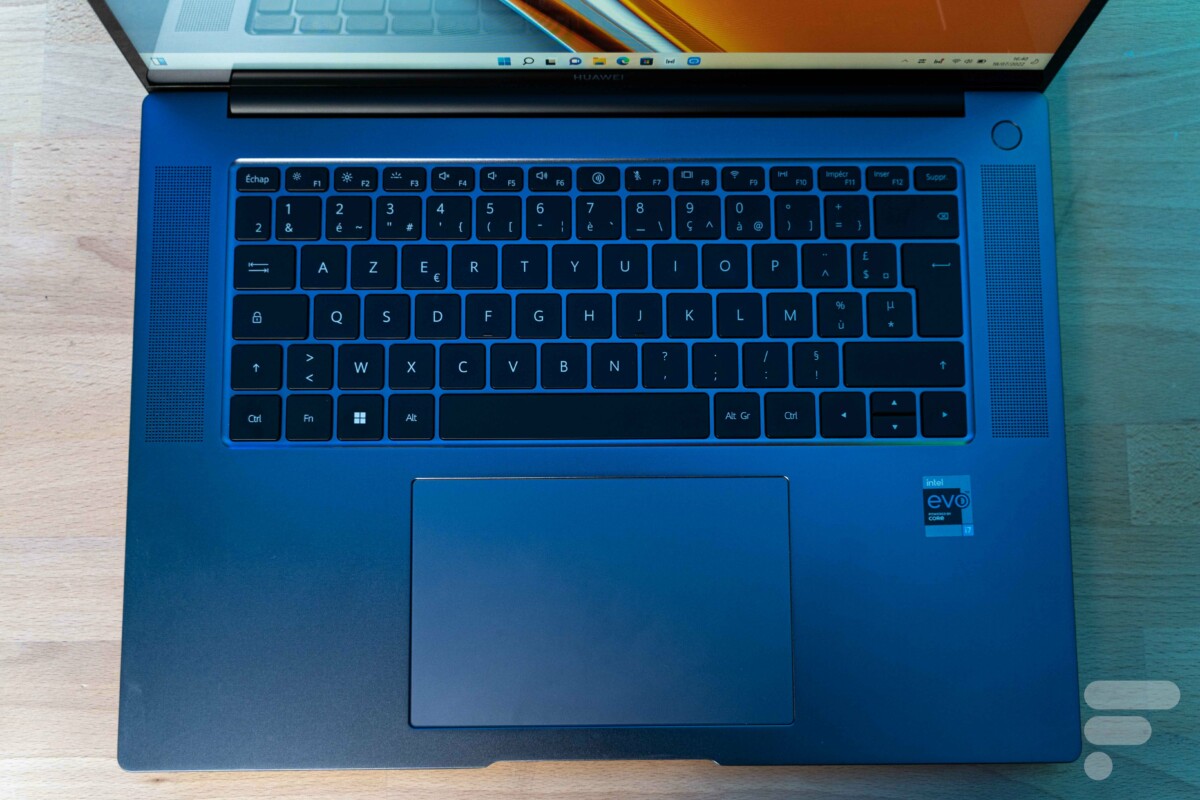 The touchpad is very large and made of glass for a perfect glide. Basically, this configuration has the effect of a classic 13.3-inch laptop that we’d enlarge to allow all of its elements to breathe. Some users would certainly prefer a numeric keypad, but this choice makes sense and makes the Huawei MateBook 16S as comfortable as possible.

On the left we can find a classic USB-C 3.2 port, as well as a Thunderbolt 4 USB-C port. Next to it is an HDMI port and a combo jack port. On the right we can enjoy two full size USB-A 3.2 and that’s it.

Having an HDMI port is a big deal, but I’d like to find an SD card reader. This is common with 16-inch configurations, often designed to boost productivity and creativity, and its absence on the MateBook 16S will force them to bring a special dongle with them.

The Full HD webcam you’ll find everywhere, with a bit of AI for automatic framing. There is no miracle; the quality is similar to all other devices on the market, or… bof. 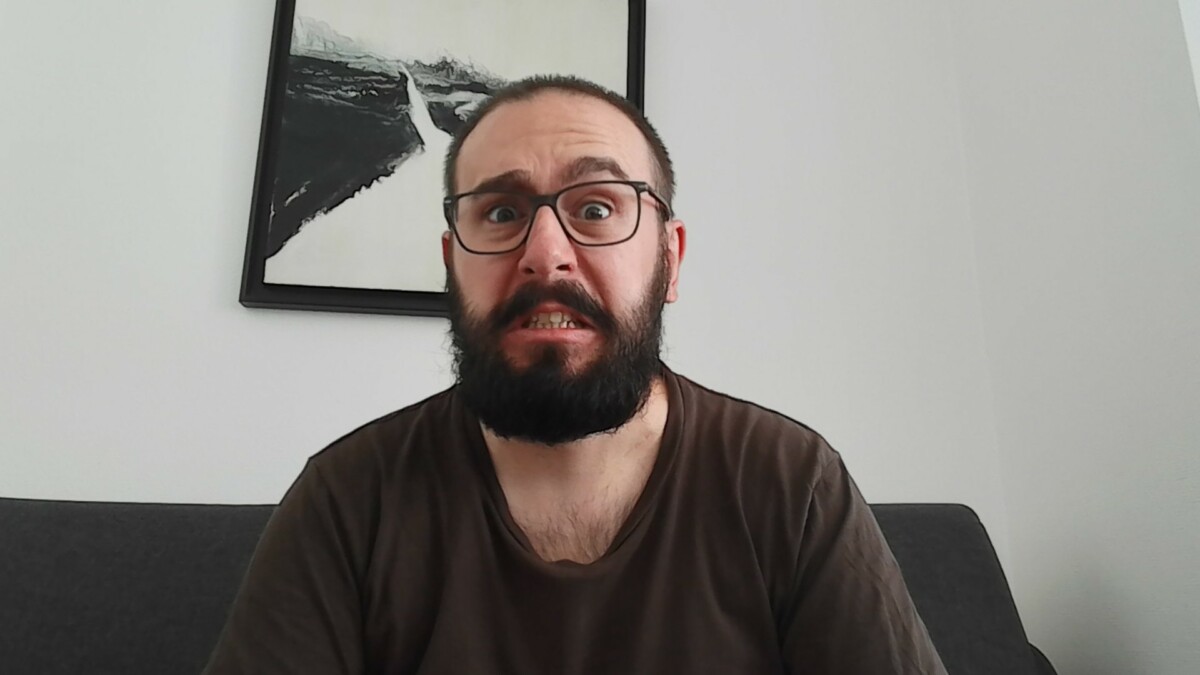 In terms of sound, it must be admitted that the MateBook 16S performs slightly better than average. The speaker placement immediately gives it sympathy points, and it’s still better than most of the benchmarks we test every week. Notice the crisp highs that lack finesse and the very well built mids. Bass is not completely absent, as it can be on smartphones, but incredibly timid. So we won’t count on it too much, but everything rounds the corners to offer a satisfying experience.

Huawei knows this: on the MateBook 16S and the regular 16-inch format, the screen should be one of the stars of the show. Therefore, it is equipped with a 16-inch 10-bit IPS LCD panel supporting a resolution of 2520 x 1680 pixels, i.e. 3:2 ratio. The screen itself is sensitive to 10 touch points. 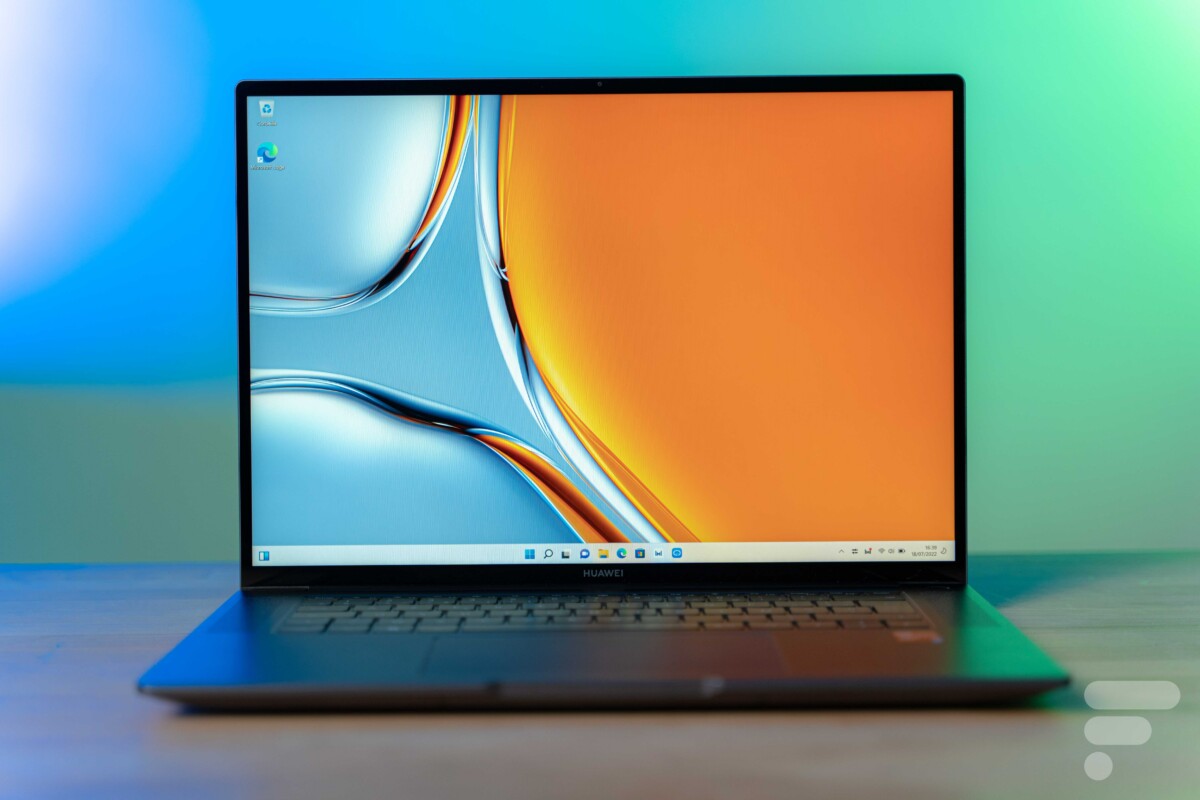 Under our probe and through the DisplayCAL software, we already note a maximum brightness of 320 cd/m², which corresponds to the manufacturer’s promised 300 cd/m². But 320 cd/m² is not entirely pleasant, as it means that the screen is hard to read in direct sunlight. This is all the more true for the touchscreen, which is inherently shiny and therefore prone to reflections. So Huawei keeps its promise, but it’s not particularly exciting.

The panel itself is capable of covering 92.4% of the sRGB space, but only takes up 63.7% of the Adobe RGB space and 65.5% of the DCI-P3 space. It’s not particularly bad, not particularly good: just basic. The color temperature is boosted to 6311K, again correct for an average Delta E00 of 2.59, so color calibration is very good. The contrast ratio is measured at 1477:1, which is very good for an IPS LCD screen.

Our tests show something like this: the screen is good. It doesn’t stand out, which is a good thing too; he makes the expected effort. We would still like a higher quality factory calibration, as the 10-bit panel integrated here is certainly capable of much more.

Windows 11 and a fairly limited amount of pre-installed adware, which is nice. Huawei still includes its own “PC Manager” package, the main purpose of which is to connect a Huawei smartphone and tablet to your laptop. 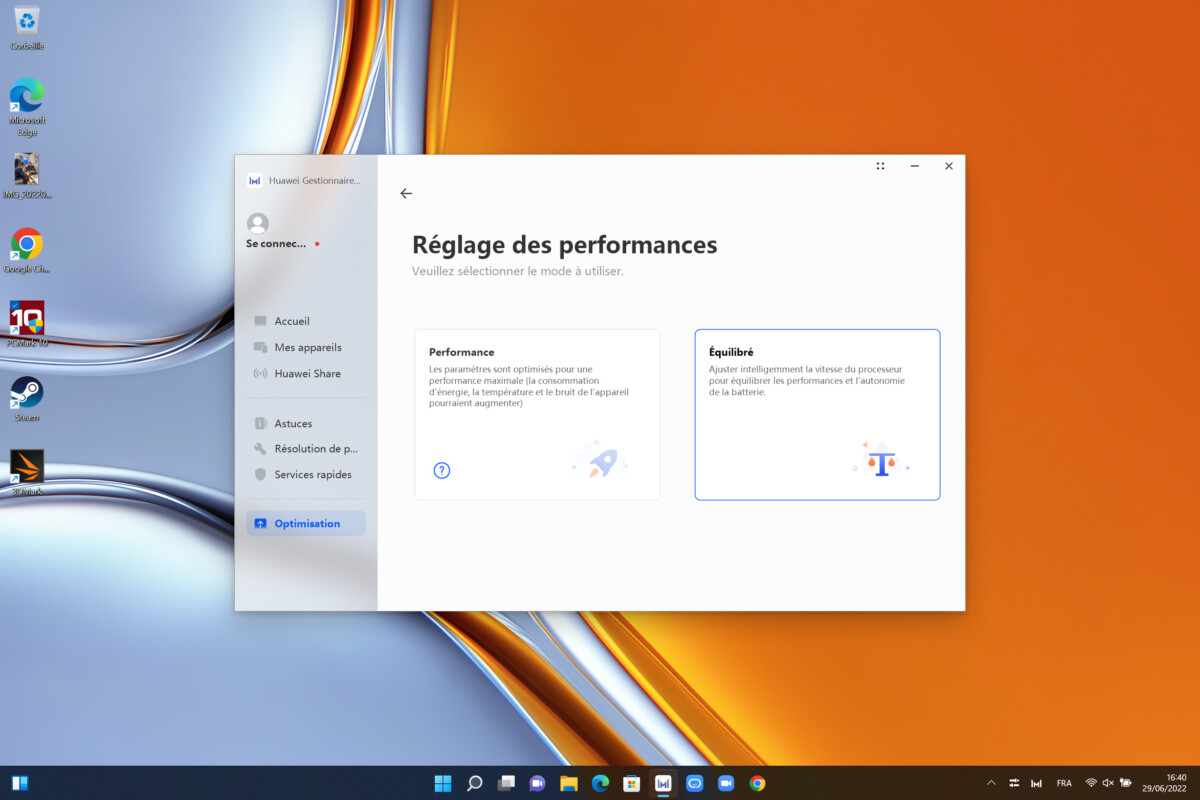 The manufacturer also includes a smartphone-inspired control panel for finding interesting shortcuts, and an assistant panel that isn’t particularly useful. Please note that you will be able to take advantage of Windows Hello thanks to the fingerprint scanner built into the device’s ignition button.

In our test configuration, the Huawei MateBook 16S is equipped with an Intel Core i7-12700H SoC. This is the latest generation processor from Intel with 14 cores, 6 P cores and 8 E cores, capable of running at up to 4.7 GHz in Turbo mode. Here it’s paired with 16GB of LPDDR5 RAM and a 1TB PCI-E Gen 4 SSD. The latter is also formatted by default to offer a 120GB system partition and a second 814GB data partition.

No nasty surprises in terms of performance on this Intel Core i7-12700H. On the contrary: it behaves exactly as expected, with 1792 single-core scores and 13619 multi-core scores in Cinebench R23. The same goes for its score of 5923 in PCMark 10. The integrated Iris Xe GPU with a score of 96 EU also offers the expected performance that will allow you to play some light games in total relaxation. 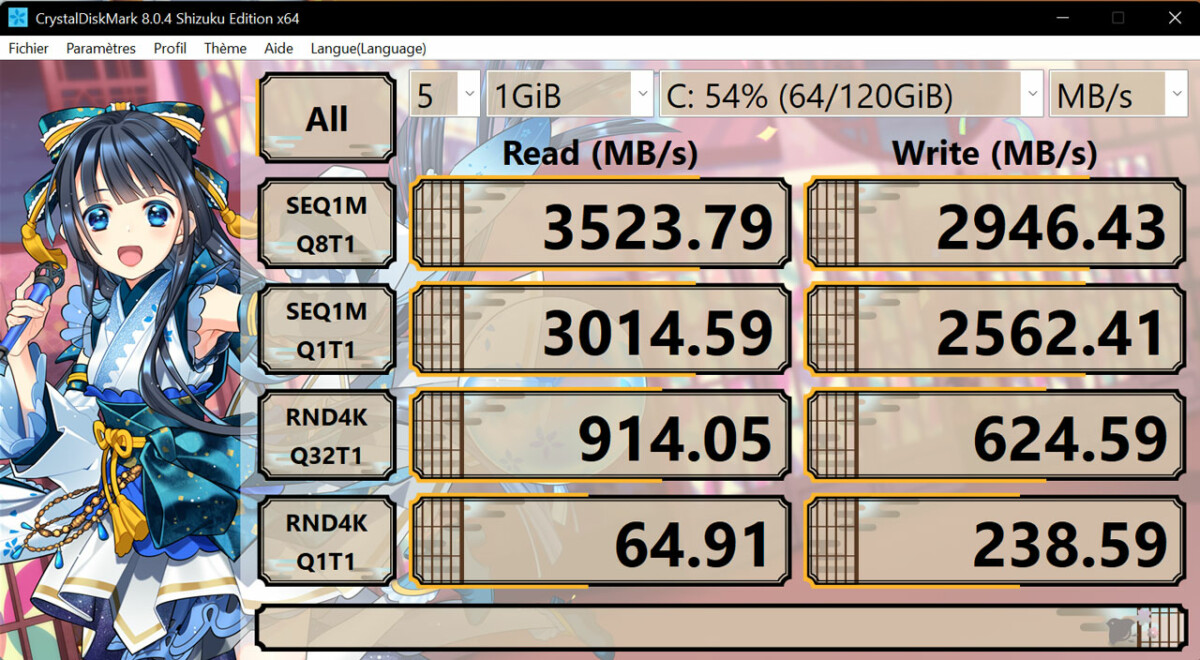 The SSD also delivers the performance you’ve come to expect from a PCIe Gen 4 SSD.

It is in this regard that the Huawei MateBook 16S is most interesting. He offers these performances without even warming up. It never exceeds 40°C at the most critical points of the PC, especially where the user would naturally have to put their hands or feet. The configuration is well researched to ensure ease of use in all circumstances.

The Huawei MateBook 16s features an 84Wh battery that charges via USB-C using the included 90W power bank. Since the computer uses Power Delivery, you will be able to charge it with any charger that uses this standard, even with a smaller capacity. Thanks standards! 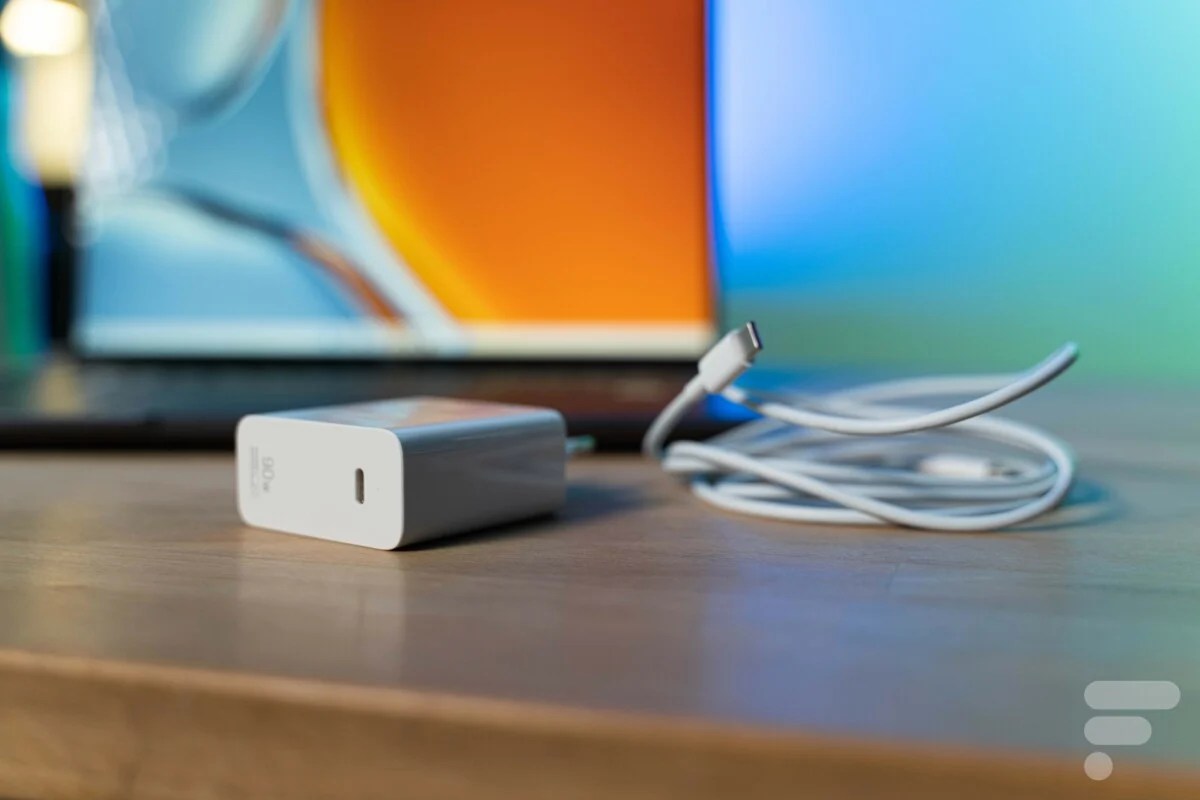 In terms of battery life, we can’t provide you with our usual PCMark 10 test. However, in use, we can expect the MateBook 16s to last through a full day of office automation and frequent repetitive use (writing, YouTube, background music, and web browsing). with medium brightness). It really holds 10 hours without flinching, which is very good for such a diagonal.

Huawei MateBook 16s in our test configuration is already available in France. It is sold at a recommended price of 1699.99 euros.