Huawei can say thank you to its Chinese users. While it is the subject of a large-scale trade war on the part of the Trump administration, which suspects it of connections with the Chinese regime, the Shenzhen firm has nonetheless managed to regain success during of the past three months. The Chinese manufacturer has thus taken first place in the ranking of the largest global smartphone manufacturers from Samsung, as reported by figures from the Canalys design office.

While it was faced with serious turbulence and suffered like the entire sector from the current health crisis, the Chinese manufacturer however managed the feat of selling 55.8 million phones in the second quarter, a drop of only 5 % over one year. At the same time, the champion of the sector, the South Korean Samsung, for its part sold “only” 53.7 million smartphones during the second quarter of 2020, a drop of 30% of its sales on a year. 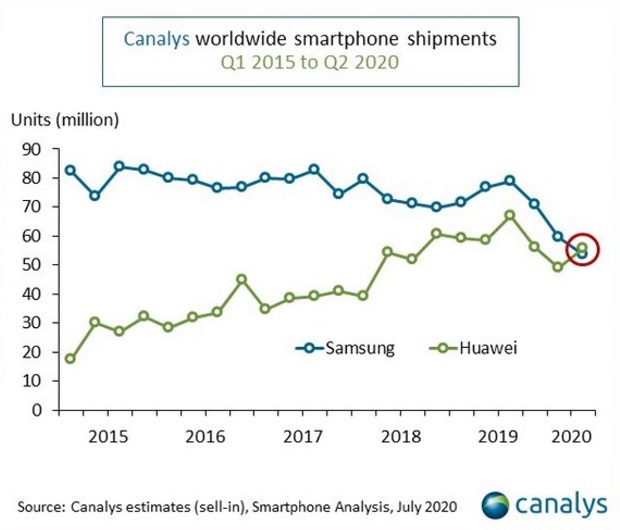 This performance, Huawei owes it only to the Chinese market. The Shenzhen firm, still subject to US government restrictions that have stifled its activities outside the Middle Kingdom, saw its overseas shipments sink 27% in the second quarter. Still, the Chinese manufacturer was able to count on the unparalleled strength of the Chinese market, increasing its domestic sales by 8% in the second quarter. So much so that Huawei now sells more than 70% of its smartphones in mainland China.

“Without the Covid-19, this would not have happened. Huawei has fully
took advantage of the Chinese economic recovery to revive its activity
in the field of smartphones. Samsung has very little presence in China,
with less than 1% market share, and has seen its main markets,
such as Brazil, India, the United States and Europe, ravaged by
epidemics and subsequent closures, “says Ben Stanton, senior analyst at Canalys, to justify what he calls” a remarkable result that few could have predicted a year ago. “

Still, the recovery in the rest of the world should not do the business of the Chinese giant. “China’s strength alone will not be enough to keep Huawei in the
summit when the world economy begins to recover, “Canalys warns.” It will be difficult for Huawei to maintain its lead in the long term. His
major distribution partners in key regions, such as
Europe, increasingly wary of the range of Huawei devices,
reducing the number of models and the introduction of new ones
brands to reduce risk. “

Remember that in addition to the smartphone market alone, the Chinese manufacturer is closely watched on the sales front of network equipment. This is how the manufacturer saw its position largely destabilized in Europe and France, where it suffers from a much stricter and monitored authorization regime than its main competitors, namely Nokia and Ericsson.