Three hundred young Quebecers hospitalized, 60 of them in intensive care. Pediatric multisystem inflammatory syndrome and Kawasaki disease may be rare, but have wreaked havoc since the beginning of the pandemic. Three mothers who have lived the fear of their lives urge other parents and the government to take the phenomenon seriously.

When Gabrielle Marchand woke up her 12-year-old little sister Rebecca the day after spring break in 2021, she panicked and called her parents.

“She would ask us to call 911. It looked like my cat had scratched Rebecca’s whole face,” says Stéphanie Peillon.

In addition to being covered in plaques, her son was limp and burning. The fever was above 40 ° C. Advil and Tylenol didn’t change that. Rebecca didn’t even want to look at her tablet. “Her eyes hurt too much,” explains Ms Peillon, who left the nursery she runs in a hurry.

For the second time in three days, the Côte-Saint-Luc neighborhood resident rushed her daughter to the emergency room at the McGill University Health Center (MUHC). Justly.

We waited six hours for the test results. Five minutes after having them, the little girl fell into shock and was taken back to intensive care …

Rebecca’s blood pressure was so low that her cells were starved for oxygen. She could have died from it. His entire body was ravaged by hyperinflammation that was dangerous to his organs. His immune system was responding out of control, belatedly, to an infection. Presumably COVID-19, doctors believe, although no tests have confirmed this.

“Even though I have worked in an elementary school for a long time and have great knowledge, I have never heard of this phenomenon,” says Ms. Peillon. The emergency room doctors started by telling us that it was nothing, just a little virus. ”

Verification carried out with the three main children’s hospitals, around 300 young Québec have been treated there for a hyperinflammatory reaction linked to an infection since March 2020. About 100 at CHU Sainte-Justine, 100 at CHU Québec and 80 at the MUHC. At least sixty of them received intensive care.

Before the pandemic, other viruses could already confuse the immune system, causing what is called “Kawasaki disease.” But since the spring of 2020, “we have had an explosion of cases related to COVID infections and some are much more serious than usual,” says Anne-Laure Chetaille-Nezondet, a rheumatologist at CHU Québec (CHUL).

Their number has almost quadrupled at CHUL. It almost tripled at Sainte-Justine and more than doubled at MUHC. At the latter center, 30% of affected children have received intensive care in the past 19 months, compared with 5% of those who previously contracted Kawasaki disease.

Like Rebecca, young people go into such a state of shock that their hearts or blood swell, explains Rosie Scuccimarri, a pediatric rheumatologist at Montreal Children’s Hospital. Others have severe abdominal pain. That is not what puts them in danger, says the specialist. “But at first, some ended up in surgery because we thought it was appendicitis. ”

The big picture is so unique that doctors are faced with a new disease, which they have called “pediatric multisystem inflammatory syndrome” (or PIMS).

The government should mention the number of similar cases in its daily reports, Peillon concludes, and schools should warn parents in letters sent to report COVID-19 cases. “Not to scare them, to inform them,” says Montrealer, who has created a support and information group on Facebook.

Six weeks in the hospital

Rebecca spent six weeks in the hospital, including five days in intensive care. He received blood transfusions with immunoglobulin. He received subcutaneous injections and took cortisone for months to fight inflammation. He saw a neurologist, a nephrologist, a cardiologist. And he must have missed the last four months of his sixth year.

In the United States, dozens of children have died from PIMS, before the medical community better understood how to treat them. All the Quebec children survived. “When they are treated quickly, they respond well to treatment and return home in the following days, without sequelae,” reports Marie-Paule Morin, a rheumatologist at CHU Sainte-Justine.

Less than 1% of young people affected by the coronavirus will develop PIMS, usually four weeks after infection, it adds. About a month after the start of the school year, which encouraged contagion, doctors began seeing patients with this syndrome again.

The number of young people age 19 and younger infected with COVID is on the rise. And last week, it jumped 30% among those under 10 years old.

In Rebecca’s class, now in the freshman year of high school, seven children would not be vaccinated. And a student from another class just had COVID-19. “I don’t understand why the government decided overnight to remove the masks in high school. We forget the risks of PIMS! », Stéphanie Peillon indignant.

“Anguish seized my daughter when she heard the news. She is experiencing post-traumatic shock. ”

High fever, severe pain, swelling of the hands, feet, and neck glands… The symptoms of PIMS are numerous. Here’s your frequency based on a study published in JAMA Pediatrics in April 2021 *.

23%: accumulation of fluid around the heart 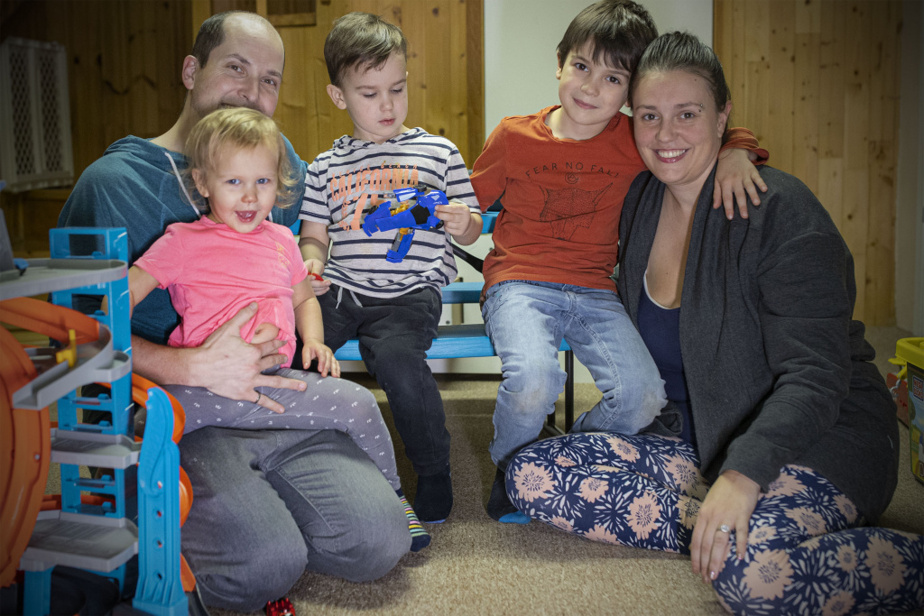 Denis Lefrançois, Marie Beaulieu and their three children: Elliot (right), Ève and Liam, in the center, beaten by the PIMS that attacked their heart

“A heart attack in children”

Without my cousin who studies to become [infirmière praticienne], I don’t know what would have happened to Liam.

The first time I took him to the ER, at the end of April, he was almost 4 years old. Sun Mother-Child Center Doctors [du CHU de Québec] He thought he had strep and sent us home telling us to wait for the results.

Two days later, he was in a cast all over: his pubis, legs, shoulders, arms, cheeks… His tongue was raspberry. And when he tried to go down the stairs, his legs gave out. I gave him Tylenol, but he might as well throw it away; nothing changed.

My cousin told me, “I don’t want to scare you, but I suspect a Kawasaki [une maladie semblable au PIMS, mais généralement moins grave]. Tell them that in the ER! On the patio, Liam was sitting in his stroller and his heart was beating 150, 180 beats per minute. The veins in his arms flared as they pricked him. The heart monitor kept ringing.

Higher doses of Advil didn’t work. They “endured” many tests and everything came out negative. They clumsily tried to reassure me by telling me that it was not a “Kawasaki”, that it was very rare.

But after 36 hours, they decided to do an ultrasound. In less than 30 minutes, my partner hastily called me. Liam was going to intensive care: ruptured myocardium. It is like a heart attack in children. The heart gives in because it cannot resist.

It may be weird, but it’s really serious and parents don’t know it. Liam is doing great now, because he got the treatment quickly. But he spent ten days in the hospital. And at home, they gave him medicine for months. He had edema and hives. His tongue was swollen.

However, we have always followed all health instructions. But I work in essential services and have been in contact with someone who had COVID. I can’t wait to vaccinate my other 7 year old. For us, it is a “no-brainer”. 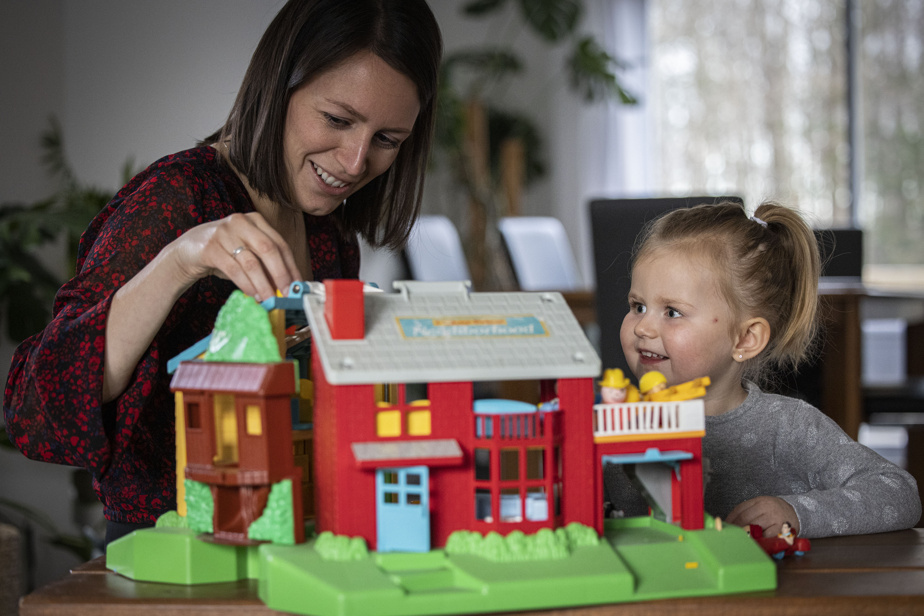 Laura Perreault and her daughter Rose, who suffered from heart disease from PIMS

Doctors ran tests and more tests on him. Day and night. Rose was not even half there, she had had a fever for a long time. Her condition was deteriorating and she was not allowed to sleep. All this without being able to make a diagnosis. Of course we imagine all kinds of things.

Days later, they decided to give her blood transfusions. They thought he had an “unusual Kawasaki”. They weren’t sure, but after 10 days of fever, Rose needed to be treated quickly, as it increased the risk of heart damage.

Fortunately, he answered well. In the first cardiology controls, the tests did not show alterations. We are relieved … Only to find out, a year later, that Rose had something on her heart: an enlarged coronary artery.

According to the cardiologist, it is a complication attributable to the syndrome. He thinks Rose’s little heart fought so hard that it grew weak.

We have no idea of ​​the impact it will have on your daily life. She is too small. She is not out of breath and does not pass out. But eventually, more tests will be needed.

My sister who just gave birth is super scared by what happened to us. COVID is believed to do nothing for children, but not always …

AIDS: years of research but still no vaccine

A walk-in vaccination operation in a shopping center in Douai

Covid-19: Omicron variant threatens against the backdrop of a fifth wave

Covid: 300 additional vaccination centers will open in the coming days

More than 200 Covid-19 patients in intensive care: News from November 28

Omicron variant detected in Belgium: “The vaccine will continue to be effective against this variant,” says this expert

AIDS: years of research but still no vaccine

A walk-in vaccination operation in a shopping center in Douai

Covid-19: Omicron variant threatens against the backdrop of a fifth wave

Covid: 300 additional vaccination centers will open in the coming days

More than 200 Covid-19 patients in intensive care: News from November 28

Omicron variant detected in Belgium: “The vaccine will continue to be effective against this variant,” says this expert