Always very active in the field of interactive stories in FMV, Wales Interactive returns to us this time with I Saw Black Clouds, released on March 30th.

This time, Wales Interactive is interested in a new genre: horror. A young woman, Emily, is found dead, hanged in her home. Following this macabre discovery, one of her friends, Kristina, decides to investigate. More than Emily, the game is about Kristina. She is the character embodied by the player, the one affected by our decisions. These have, moreover, a rather particular impact.

The player has many decisions to make, but these usually have very little immediate impact. So whether you go left or right when exploring an old building, the rest of the story will be the same. One could without too much difficulty speak of “Telltale choice”; it is, in any case, an extremely linear story. This aspect is reinforced by the fact that it is possible to die during the game, but that in this case the player is taken back a few minutes: what idea of ​​having tried to move away from the main narrative?

However, these choices are, in reality, not without consequences. Indeed, I Saw Black Clouds is a game of gauges: each of your decisions impacts certain gauges, whether they are those expressing your character, your relationships or your state of mind. It is these gauges which determine the evolution of history. When you reach halfway, the story splits into two completely different narratives depending on how far your gauges are at this point in the game. Then, those same gauges determine whether you’re entitled to the right or wrong ending. out of your way. 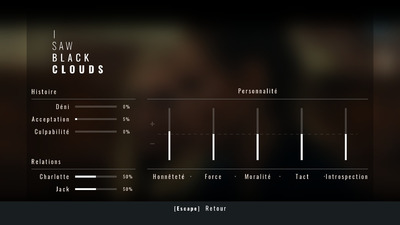 Let us take this opportunity to recall that Wales Interactive is now the publisher offering the best production for its narrative games. In addition to the French subtitles – essential to fully enjoy the experience – and the total absence of QTE, the editor allows you to skip the scenes already seen, which encourages you to start over and over again to explore all the possibilities.

In The Complex, these mechanics had an unexpected consequence for me: in 3 hours of play, I had naturally accessed all the endings and unlocked all the trophies in the game, my desire to explore ample enough.

In I Saw Black Clouds, after unlocking a “good ending”, I tried to get its evil counterpart. I tried for the first time, without success. Then a second. Then a third. In total, I did five different tests, all of which were unsuccessful, failing, despite my best efforts, to get the gauges to the right place.

Granted, making a story goes pretty fast, so it doesn’t take too long – I only have 4:40 on the game so far. However, it is very frustrating not to succeed in bending the narrative in the direction that one wishes. It seems unnatural and compelled, ultimately, to look at a solution if one wishes to achieve all the successes, which should not be necessary.

I’m not a huge horror fan, which probably affects my perception. Nonetheless, I found the narration to be quite slow and boring; the story clearly caught me less than other narrative titles.

Plus, despite the technical qualities of the game, its storytelling is frustrating. The Complex had been very impressive in this regard, for its ability to encourage exploration and reward it. I Saw Black Clouds also encourages exploration, but it does not reward it: to triumph without a guide, you have to start over and over again, which is not appetizing.

Is this a reason to pass on the game? If you like narrative games and horror probably not, because it still has some qualities. Don’t expect too much though, as this is not one of Wales Interactive’s best vintages. I Saw Black Clouds is available on PC, Mac, PlayStation 4, Xbox One and Nintendo Switch for € 13. It will be released later on Playstation 5 and Xbox Series S/ X, but is already available on these consoles via backward compatibility. 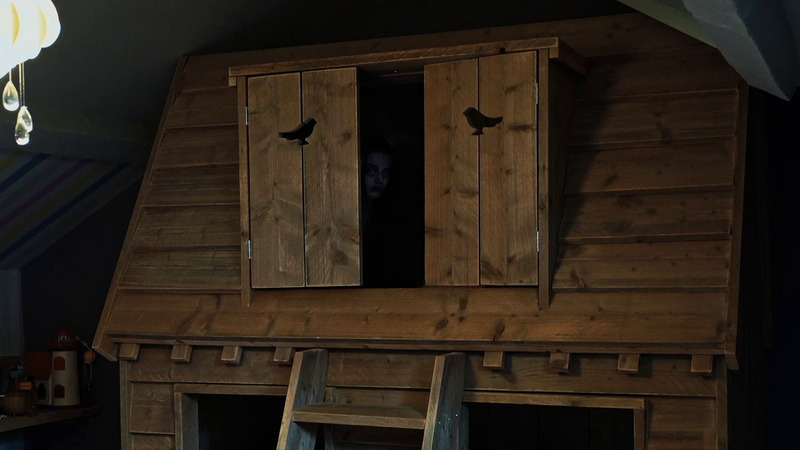 Test carried out on PC by Alandring from a version provided by the publisher.