IBM announced a new 127 qubit processor called the Eagle and previous models of the IBM Quantum System Two, Big Blue’s next-generation quantum system. The news, announced at the IBM Quantum Summit, highlights the progress IBM has made in hardware. Last year IBM introduced its hardware and software. By 2025, IBM predicts that quantum computing will likely be mature and will enable a wide range of applications that will outpace traditional computing.

Quantum computing is a booming market, as evidenced by IonQ shares, which have risen following deals with Accenture and Softbank. Honeywell Quantum and Cambridge Quantum will join forces and will likely go public. IBM also expects quantum technology to become an important part of its business as the ecosystem grows.

Eagle represents a major step forward for quantum computing and is the company’s first processor to contain more than 100 qubits, says Bob Sutor, vice president of AI, blockchain and quantum solutions at IBM.

IBM has about fifty quantum systems in place and two installed outside of the United States. Eagle was made in IBM’s own factory, but Bob Sutor says the volumes aren’t high. For now, IBM uses its processors on its own systems.

According to IBM, Eagle is leveraging new techniques that place control components on multiple physical layers while keeping qubits in a single layer. “Building quantum processors is much more complicated due to the nature of qubits and how they all have to work together,” says Bob Sutor, who adds that eliminating interference is essential.

The result of this Eagle 3D conditioning architecture is that there are more usable qubits. Bob Sutor points out that Eagle cannot be fully simulated on a conventional computer.

In a blog post, IBM describes the Eagle architecture:

“We had to combine and improve upon techniques developed in previous generations of IBM Quantum processors to develop a processor architecture that included advanced 3D encapsulation techniques that we believe can form the backbone of processors up to and including our Condor processor over 1000 qubits. Eagle is based on our heavy hexagonal qubit design, as first introduced with our Falcon processor, where the qubits are connected with two or three neighbors as if they were sitting on the edges and corners of tessellated hexagons. “

Eagle will be available to selected members of the IBM Quantum Network in December. Here’s a look at the unstacked Eagle: 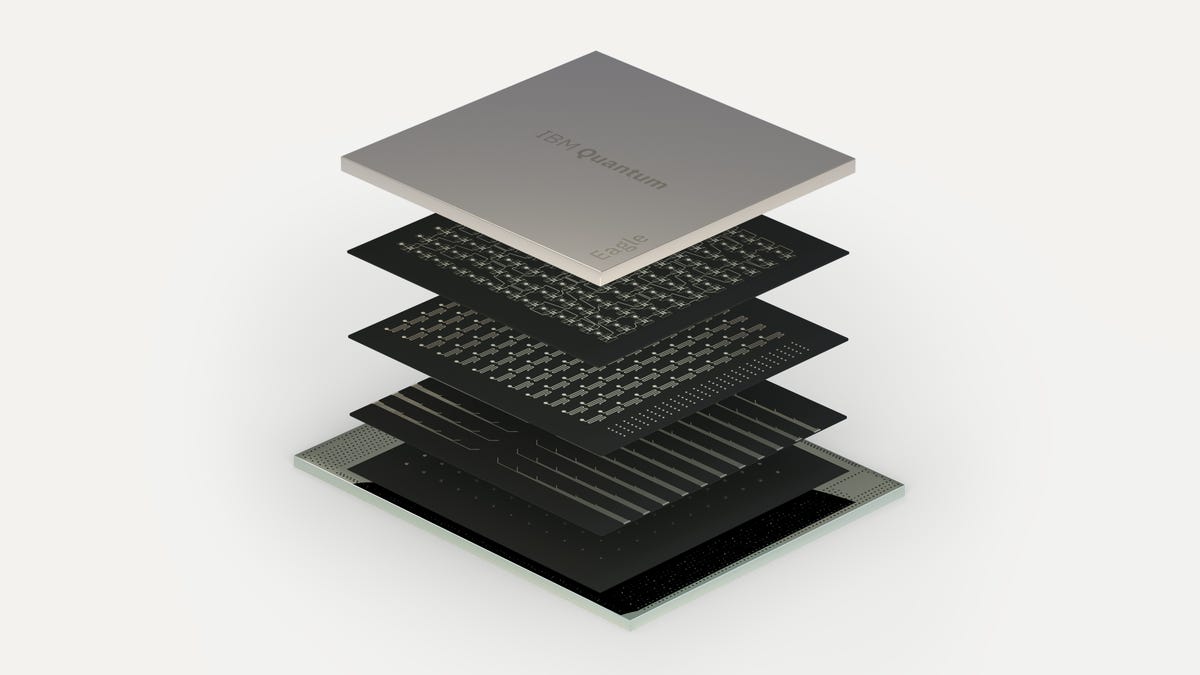 This Quantum System Two architecture allows customers to manipulate and test parts of the system without affecting the entire configuration. IBM’s latest quantum system will be operational in 2023 at IBM Research.

Regarding the modularity of the Quantum System Two, IBM explains that:

“With this system, we are giving flexibility to our hardware to continue expanding our chips. The team takes a holistic systems approach to understand the resources required to support not only our future Osprey and Condor processors, but also quantum processors in the future, as we move forward on our hardware roadmap. System Two incorporates a new generation of scalable qubit control electronics, as well as cryogenic components and higher density wiring. In addition, we are working together with Bluefors Cryogenics to reinvent the cryogenic platform. Bluefors’ new Kide cryogenic platform and its hexagonal footprint optimize the space within the refrigerator to accommodate the hardware required by the largest processors, while ensuring engineers can easily access and maintain the hardware inside the refrigerator. “

“We learned a lot of techniques and methods by having other people install and back up the systems remotely,” he says.

“It’s similar to how NASA had to train astronauts in space to make repairs. “