Chinese authorities’ censorship worked Monday to erase all traces of the wave of demonstrations that took place the day before against health restrictions and for greater freedoms, gatherings on a scale unprecedented in decades.

On Sunday, a crowd of demonstrators, responding to calls on social media, expressed their anger in Beijing, Shanghai and Wuhan, among others, catching police by surprise.

Among the slogans chanted in unison: “No Covid tests, we are hungry!”, “Xi Jinping, resign!

In terms of its scale in the territory, the mobilization, the total number of participants of which is difficult to verify, seems to be the most important since the 1989 pro-democracy riots.

This is the culmination of popular discontent that has been building in recent months in China, one of the last countries in the world to implement a strict “Covid zero” policy that includes repeated confinement and near-daily PCR tests on the population.

The deadly fire in Urumqi, the capital of the northwestern province of Xinjiang, has drawn the ire of many Chinese, with some blaming health restrictions for blocking relief efforts.

But this weekend’s demonstrations have also raised demands for more political freedoms, even the resignation of President Xi Jinping, who has just been reappointed for an unprecedented third term at the head of the country.

On Monday morning, police presence was visible in Beijing and Shanghai near the gathering places the day before, AFP journalists said.

In Shanghai, one of the streets occupied by the crowd during the night was now surrounded by blue palisades along the sidewalks to prevent any new gathering of people.

Clashes erupted on Sunday between demonstrators (some with flowers or white sheets as symbols of censorship) and police, and several people were arrested.

On Chinese social media, any information about the protests appeared to have been deleted on Monday morning. On the Weibo platform, a kind of Chinese Twitter, searching for “Liangma River” and “Urumqi Street”, two protest sites the day before, returned no mobilization-related results. 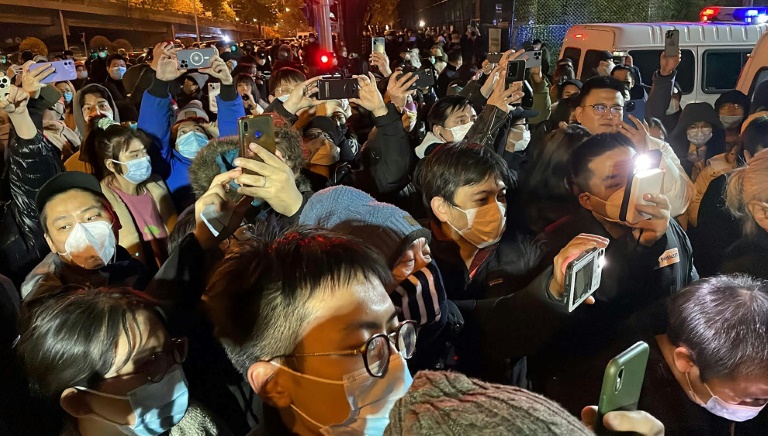 Videos of students singing and protesting in other cities have also disappeared from the WeChat network. These were replaced with messages stating that the post was flagged “due to sensitivity or rule violations”.

On Weibo, searching for the #A4 keyword — for white sheets raised during rallies — appears to have been modified to only return a few results from previous days.

Chinese authorities’ strict control over information and medical restrictions on domestic travel make it difficult to verify the total number of protesters over the weekend.

But such a massive uprising is extremely rare in China, given the suppression of any form of opposition to the government.

Demonstrations were also held on Sunday in Wuhan (center), where the world’s first case of Covid-19 was identified nearly three years ago, as well as in Guangzhou, Chengdu and Hong Kong.

On Monday, People’s Daily published text warning of “paralysis” and “tiredness” in the face of the zero-Covid policy, but without calling for an end to it.

“People have now reached a boiling point because there is no clear direction forward to end the zero Covid policy,” Chinese politics expert Alfred Wu Muluan at the National University of Singapore told AFP. 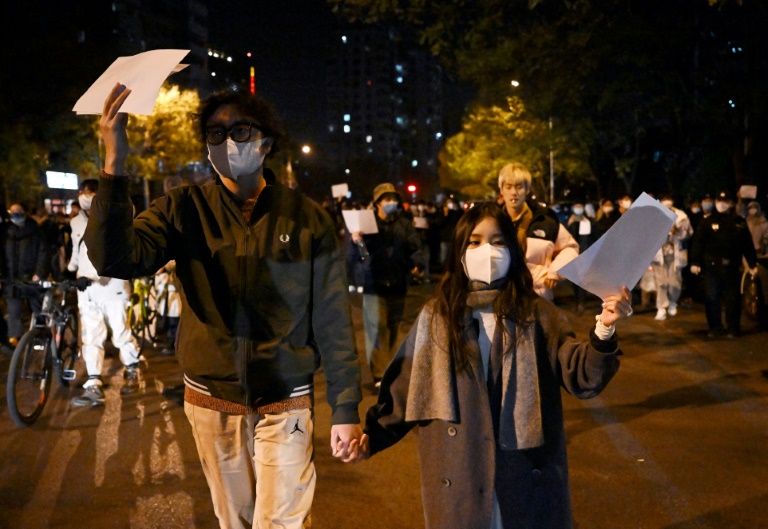 “The party underestimated the anger of the population,” he adds.

The protests worried investors, and Asian stock markets fell sharply at the open on Monday.

As for the number of Covid-19 cases in China, it has reached a new record since the start of the pandemic on Monday with 40,052 cases, even if the vast majority of them are asymptomatic. And the figure remains very small compared to the population of China (1.4 billion inhabitants).