According to the organizers, the “march against the Uyghur genocide” gathered around 2,000 people in Paris this Saturday, October 2, from various European countries. Ignored a few years ago, the Uighur cause quickly made its way into the French public debate, aided by a highly offensive communication campaign and the convergence of struggles with other movements. Young people are by far the most mobilized.

At the head of the procession, Belgian and Dutch flags rub shoulders with hundreds of blue banners, the color of the Uyghurs. For the first time, the main European associations have coordinated to make Paris, for one day, the epicenter of the struggle for this persecuted Turkish-speaking minority in Xinjiang, China.

In continuous rain, Belgian elected officials, including Socialist Party leader Paul Magnette, speak alongside French presidential candidate EELV Yannick Jadot or anti-racist activist Assa Traoré. The crowd, very young, suddenly shouts: “Raphaël, Raphaël, Raphaël! At the microphone, the most media activist of the cause, Raphaël Glucksmann, praises this young man: “You have forced the media and politicians to talk about the Uyghurs, to place them at the center of the European debate. You did what Emmanuel Macron didn’t want to do! ” 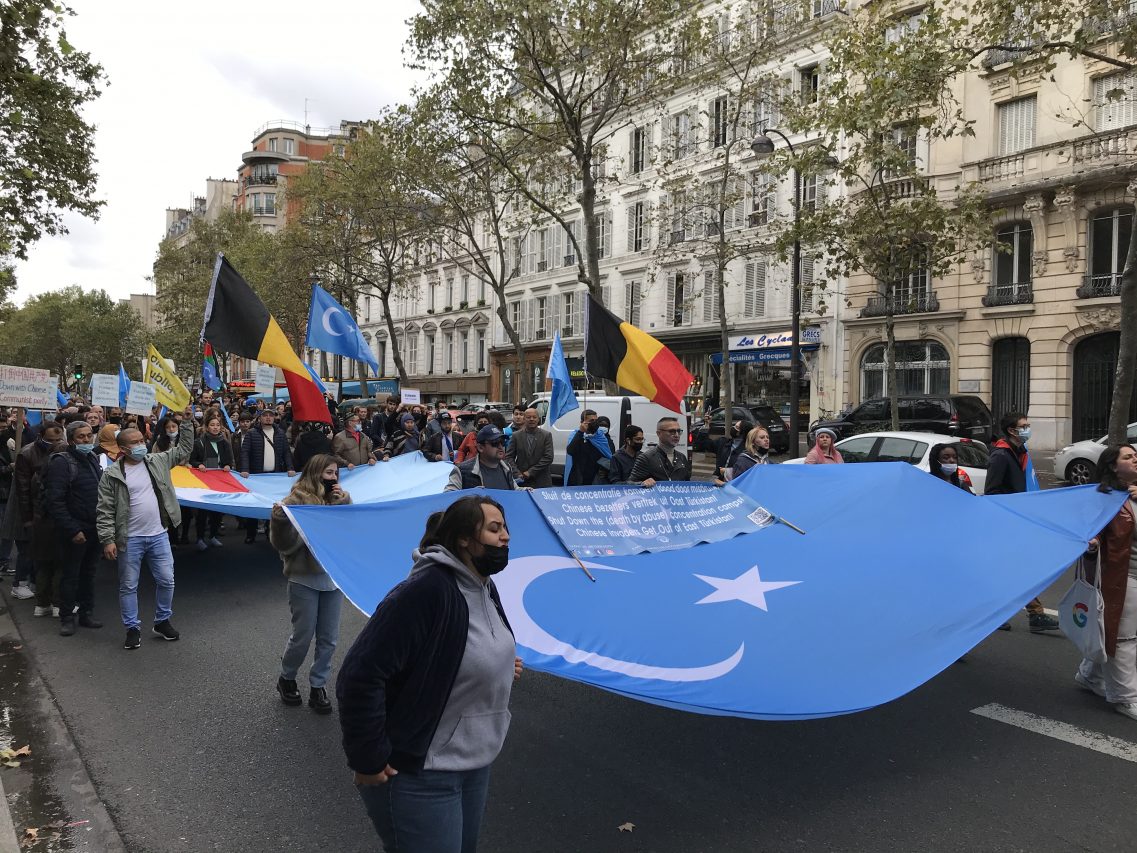 The “march against the Uyghur genocide” brought together delegations of associations from Belgium, the Netherlands, Germany and Norway, on October 2, 2021 in Paris. (Credit: Baptiste Fallevoz)

Young French people, “who are the most mobilized in the world,” according to Dilnur Reyhan, president of the Uyghur Institute of Europe and co-organizer of the march, have taken the lead in a struggle they were not aware of very recently. 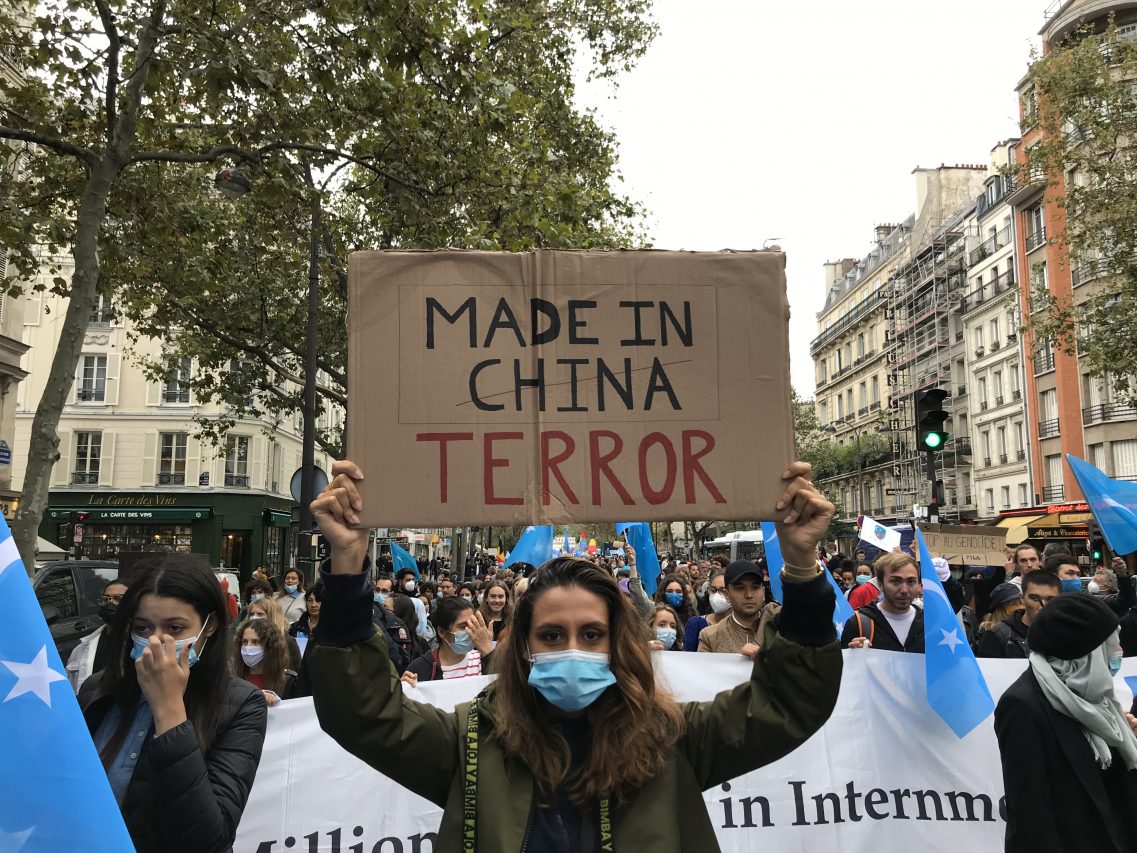 The “march against the Uyghur genocide” gathered around 2,000 people, according to organizers, on October 2, 2021 in Paris. (Credit: Baptiste Fallevoz)

“I am Armenian, we lived it for 100 years and we do not want it to happen again,” testifies Grégory who, like his friends, heard about the Uyghurs less than two years ago, through Instagram. “By an influencer”, specifies Mariam, next to him. “I am a Muslim and I don’t want this kind of thing to happen one day in France,” concludes Lina.

Raphaël Glucksmann’s coup takes place on October 1, 2020, China’s National Day. In his Twitter and Instagram accounts, the MEP asks Internet users to show a blue square on their profile, accompanied by a caption denouncing “the largest mass internment of the 21st century.” In a few hours, tens of thousands of accounts were colored blue, including those of personalities such as Laetitia Halliday, Adèle Exarchopoulos, Omar Sy or Marina Foïs.

“Raphaël Glucksmann has known how to reappropriate codes that had proven their worth in the past,” explains Charlène Dupé, specialist in digital activism, recalling that this blue square had already been used during the Sudanese revolution in 2019, then in black. Black Lives Matter movement.

The creation of the hashtag #freeuyghurs allows you to collect all the messages under a banner and forward them in the “trending topics”, the most talked about topics on social networks. “These posts are usually short, fun and colorful,” adds Charlène Dupé. The Uyghur defense movement has been able to speak with “clicktivists”, these Internet users who care about social problems, but only express themselves by transmitting messages, and with more committed “slacktivists” who will sign petitions or call their community . to convey information. ”

A strategy totally assumed by Raphaël Glucksmann, for whom “the mass media and politicians assumed that the Uyghur question did not interest the people. What social networks allow is precisely to break this alibi of “people”. They are a means of imposing issues that were not part of the political-media agenda. ”

“Share this post by putting @antogriezmann in your story, tag 3 of your friends, fans of Grizi and the French team,” said the message, which went viral in a few hours and forced the player to terminate the contract.

Dilnur Reyhan, who collaborates with Uighur News, is also confident in the convergence of struggles: “At first we challenged other movements outside the Uyghurs. With environmentalists, for example, we discussed the numerous nuclear tests carried out in Xinjiang between the 1960s and 1990s, or the forced labor in the cotton fields. With feminists we will talk about rapes and forced sterilization campaigns. ”

In July 2020 he denounced precisely in a forum “the unbearable silence of feminists” in the face of the tragedies suffered by Uighur women. The result is immediate. In the days that followed, slogans in support of the Uyghurs lined the walls of several French cities. They are the work of the feminist collective “les colleuses” that publicly mocks the brands accused of complicity with the repression in Xinjiang.

Uniqlo in the viewer

Last week, Camille Etienne, often referred to as the “French Greta Thunberg,” was seen towing at the entrance to the new Uniqlo store, Place d’Italie in Paris. The environmental activist reminded customers that the brand was under investigation in France for “hiding crimes against humanity” along with three other textile giants (Inditex, Fast Retailing, SMCP).

“These brands that work by extracting raw materials also work by extracting human resources. They put pressure on the ecosystem and on the human being ”, judges Camille Etienne, admiring this fight by the Uyghurs who“ knew how to bring together different political forces and which had an incredible echo thanks to their modes of action ”.

A house of the Uyghurs in Paris

If the youth lead the fight, their favorite media broadcast it. It was during an interview with Brut last December that Emmanuel Macron faced the most insistent questions about the persecutions in Xinjiang. But his calls for a “European strategy against China to demand an immediate end to the camps, to the violence” were considered too timid by the militants.

Dilnur Reyhan and Raphael Glucksmann have been asking for a meeting with the head of state for months, with no response at the moment.

But the mobilization continues to bring modest victories every week. Some fifteen French cities have signed the letter of solidarity with the Uighur people. The mayor of Paris, Anne Hidalgo, announced this Saturday the upcoming opening of a house dedicated to the cause. The City Hall will also be illuminated in the colors of the Uyghurs on November 12.

Asialyst is designed by a team made up 100% of volunteers and thanks to a network of collaborators in Asia or elsewhere, journalists, experts, academics, consultants or former diplomats … Our only goal: to share knowledge of Asia as much as may be possible . large audience. 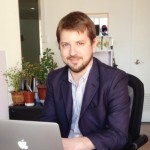 Producer, journalist, currently editor and columnist at France 24. Previously based in China, he was Deputy Director General of ActuAsia, in Shanghai and then in Beijing, from 2009 to 2016. He collaborated with numerous French and international media (France 24 , Art, Associated Press, Canal +, BFM TV or Mediapart).