The company specializing in television and streaming audience measurement has established 3 rankings for 2020: original series produced by the most viewed platforms, series distributed by the most viewed platforms and films. This classification only takes into account series and films viewed on a TV (therefore excluding computers, smartphones and tablets) and for a limited number of platforms: Netflix, Amazon Prime Video, Hulu and Disney +. This ranking is far from unanimous among streamers who regularly reveal their own ranking.

It is the preferred battleground for streaming platforms, especially since the studios are embarking on the adventure. Faced with Disney +, Amazon Prime Video and Hulu, Netflix still has a good lead. Its number of American subscribers gives it an unparalleled consumer base. No wonder there are 9 original Netflix series in the Top 10, knowing that Nielsen was not measuring Apple TV +, HBO Max or Peacock in 2020. 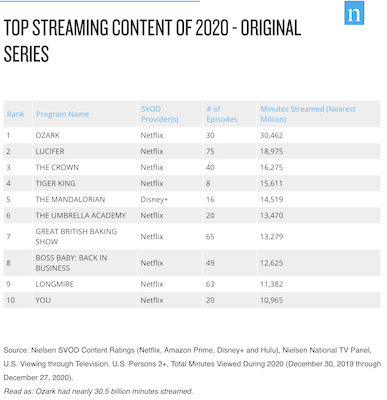 At the top of this ranking “Ozark” with just under 30.5 billion minutes broadcast, according to Nielsen, far ahead of other Netflix series, “Lucifer” (18.98 billion minutes), “The Crown” (16 , 28 billion minutes) and “Tiger King” (15.61 billion minutes). “Ozark” is three seasons and 30 episodes whose adventure will end in 2021 with the broadcast of the fourth and final season. The gap between “Ozark” and the other series is very important, the upcoming end of the series is therefore already a challenge for Netflix to take over the adventures of Marty and Wendy Byrde. Two series took full advantage of the confinement, their upload corresponding to this time of year: “Ozark” and “Tiger King”. The only non-Netflix original series is “The Mandalorian” which ranks 5th with 14.52 billion minutes watched.

Netflix trustees the 10 first places in the ranking in 2020. Since then, all the studios have embarked on the adventure of SVOD and the series licensed to Netflix are gradually returning to the original rights holder. This is the case of “The Office” which reached more than 57 billion videos viewed for 192 episodes in 2020 at Netflix and which is now broadcast by Peacock, the service of Comcast / NBCUniversal. The second series is “Grey’s Anatomy” with 366 episodes and 39.4 billion minutes of viewing by American consumers. Originally broadcast on ABC (Disney) and created by Shonda Rhimes (who has since signed a contract with Netflix) since 2005, “Grey’s Anatomy” is the perfect example of a studio series distributed by Netflix on SVOD in the United States. In France, “The Office” is offered by Salto in SVOD and “Grey’s Anatomy” available on Salto and Amazon Prime Video.

But what is most astonishing is that the 3 most viewed programs in the United States in 2020 are old programs dating from the 2000s and which have been broadcast several times on TV channels, on DVD and offered. in TVOD for many years. One of the factors that has also favored these old series is their number of episodes, which is close to 1200 online episodes for the first 4 series in the ranking. 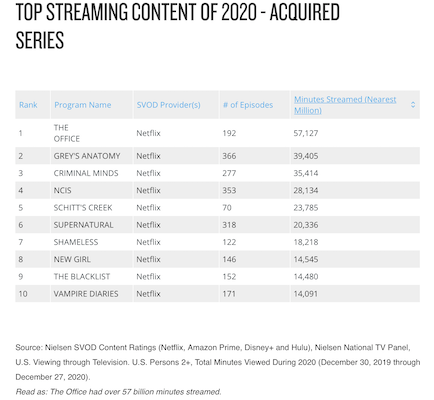 The Top 10 films broadcast on SVOD in 2020 rolled out the red carpet at Disney + which, just launched, took 7 places out of 10. The ranking reveals a mix between catalog programs and recent films. It is “Frozen II” which comes first with 14.92 billion minutes broadcast, followed by “Moana” (10.5 billion minutes) and “Secret Life Of Pets 2” from Netflix (9.1 billion minutes ). We note the presence of “Hamilton”, the musical event of 2020. Indeed, Disney bought the rights to the recording of the musical for 75 million dollars in anticipation of a theatrical release. Eventually, the film was released on SVOD on July 3, 2020 and was an unforeseen and smashing success. Nielsen points out that 8 out of 10 films are children’s films that have been seen and re-examined during the long periods of confinement of the year. Only one action film appears in the ranking, it is “Spenser Confidential” with Mark Wahlberg and released by Netflix. 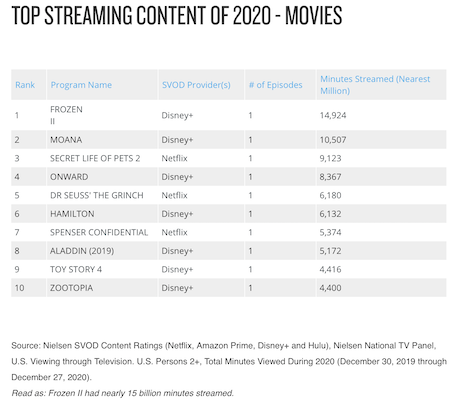 Nielsen observes that the most watched content on streaming platforms was not just the original shows: there are older shows that first found success on traditional channels and explains: “While original content can generate buzz and attract audiences, catalog content comforts viewers because these are shows that have already made connections with audiences.”

It now remains to wait for communication around the consumption of SVOD programs to normalize so that all market players have reliable and comparable data, in the United States but also in all other countries.