In Floodland, a city-building strategy game, the villain to defeat is not a monster, an alien, or a tyrant, but climate change.

Floodland is a “survival board game in a world ravaged by climate change”. The mission of the players? The rebuilding of society after the melting ice caps devastated civilization, turning the land into war-torn islands… Do you know that? This is fine.

A thick layer of fog blankets a swampy landscape that holds the remnants of the world’s industrial past: half-submerged ships, rusting water towers and crumbling skyscrapers. Electricity is a memory of a bygone era: all that’s left are bands of wandering survivors and scarce resources… This is the post-apocalyptic world of Floodland.

In this devastated universe, players are divided into clans (Les Bons Voisins, Les Survivors, La Brigade and Berkut-3). With limited access to resources (water, food, etc.), you must constantly take care of the population, which grows as you progress through the game. And people are the way they are, the more populated the colonies, the less protected they are from problems… So be careful, poor management of resources or habitat can have disastrous consequences: hungry inhabitants, thirsty or sick, ready to riot. But that’s not all: each clan with its own vision of the world and the future, maintaining peace with other factions, is also part of the mission. 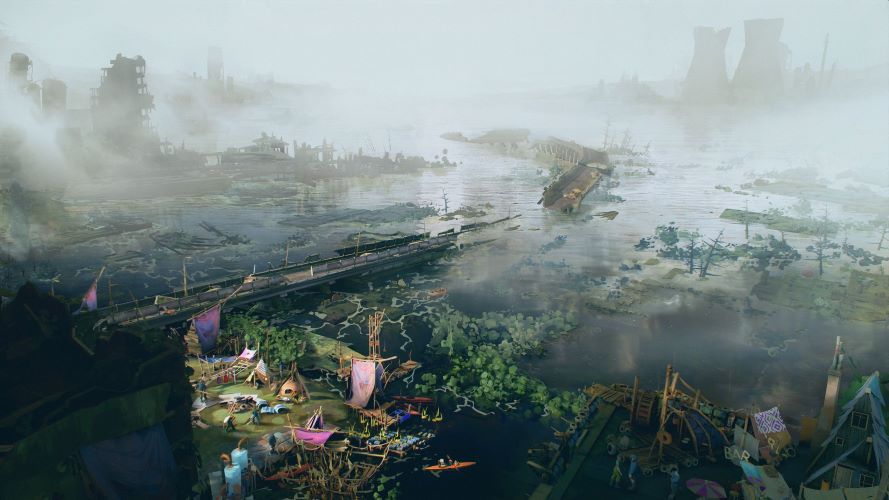 Combating the effects of climate change

Each player must make his own choice: unite the rest of humanity or choose isolation? In any case, everyone will form their own society of tomorrow, from utopian to dictatorial. And this question of choice is central to designers. “The goal of Floodland is not to preach, but to explore choice, consequences and the concept of responsibility from different angles. It seemed to us especially timely and important to use such stories so that we can discuss the problems of today’s world,” emphasizes Mr. Kwiatkowski, co-founder of the Polish studio Vile Monarch, who developed the game.

Floodland isn’t the first game to depict a dystopian planet devastated by climate change. We can also find rooms of rising waters in adventure games such as Highwater, Submerged or Waterworld. Other games, such as Endling or Frostpunk, highlight other environmental hazards, such as the extinction of fauna or the depletion of energy resources.