Meteorites say a lot about the origin of the Earth and the conditions that existed when the solar system was formed. Recently, a team of Canadian researchers discovered at least two new minerals never before found on Earth in a 15-tonne meteorite found in Somalia – the ninth largest meteorite ever discovered.

The solar system formed 4.5 billion years ago as a result of the gravitational collapse of the core of a molecular cloud, which led to the formation of a circumsolar disk of gas and dust (sometimes called the solar nebula). This disk eventually developed into a planetary system consisting of one central star, the Sun, surrounded by four terrestrial planets in the inner solar system, four giant planets in the outer solar system, and many smaller bodies, including asteroids, moons. , dwarf planets and comets.

Meteorites are parts of other larger bodies that have been smashed or destroyed and have arrived on Earth. Most of them were formed as a result of the destruction of asteroids, although some of them came from Mars or the Moon. Thus, they represent some of the raw materials that formed the planets billions of years ago. By studying meteorites, we can learn about conditions and processes in the early history of the solar system. These include the age and composition of the elements involved in planetary formations, the temperatures reached on the surface and within asteroids, and the extent to which materials have been impacted in the past.

:: T-SHIRT THAT SUPPORTS SCIENCE! ::
Support us by buying a poster that throws:

Recently, a team of researchers from the University of Alberta identified two new minerals in the El Ali meteorite that fell in Somalia, never before found on Earth. Chris Hurd, professor in the Department of Earth and Atmospheric Sciences and curator of the meteorite collection at the University of Alberta, described the results at the November 21 Space Science Symposium.

The meteorite has been known for generations, but was only identified in 2020.

According to the Lunar and Planetary Institute, the El Ali meteorite was found in the Hiran region of Somalia, near the city of El Ali, after which it is named. Local shepherds report that they have known this rock for more than 5-7 generations, as evidenced by folklore, songs, dances and poems. Being metal, they used the stone as an anvil on which to sharpen their knives. There were no other debris nearby. She was known as “Twilight”.

The meteorite was discovered near the city of El Ali in Somalia, half covered with sand. © GlobalResources

It weighs 15.2 tons and is almost 2 meters wide. In 2020, a 70-gram piece of iron-based meteorite was sent to the University of Alberta Meteorite Collection for classification. Together with researchers at UCLA and Caltech, Hurd classified the El Ali meteorite as an “iron complex, IAB” meteorite, among 350 others in that category. These are meteorites composed of meteoric iron (different from terrestrial magmatic iron) interspersed with tiny bits of silicates.

When Chris Hurd was analyzing the meteorite to classify it, he noticed something that caught his attention. He then turned to Andrew Lockock, director of the Electron Microprobe Laboratory at the University of Alberta, for help.

Hurd explained in a statement: “The very first day he did any analysis, he said, ‘You have at least two new minerals.’ It was phenomenal. In most cases, it takes much more effort to say that a new mineral has appeared.” He adds: “Every time you find a new mineral, it means that the actual geological conditions, the chemical composition of the rock, was different from what was found before.” 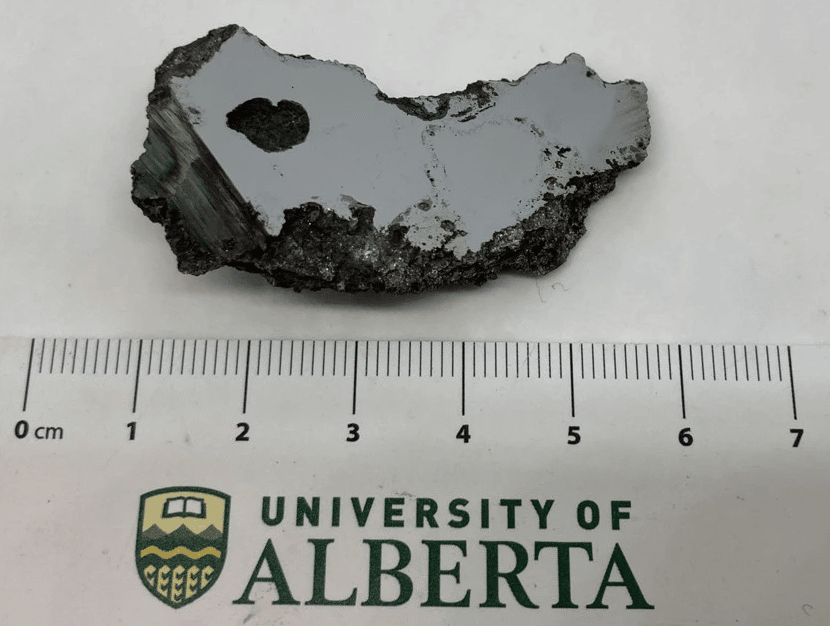 Lockock’s quick identification was possible because both minerals had previously been created synthetically, so he was able to match the composition of the newly discovered natural minerals with their man-made counterparts.

The two minerals have been named elaliite and elkinstantonite. The first got its name from the El Ali meteorite itself. Hurd named the second mineral after Lindy Elkins-Tanton, vice president of the ASU Interplanetary Initiative, professor in the School of Earth and Space Studies at Arizona State University and principal investigator for NASA’s upcoming Psyche mission.

You should know that Psychè’s mission consists of a trip to a unique metal-rich asteroid orbiting the Sun between Mars and Jupiter. What makes the asteroid Psyche unique is that it represents the exposed nickel-iron core of an early planet, one of the building blocks of our solar system.

Herde points out: “Lindy did a lot of work on the formation of planetary cores, the formation of these iron and nickel cores, and the closest analogue that we have is iron meteorites. Therefore, it made sense to name a mineral after him and recognize his contribution to science.”

For now, researchers continue to study the minerals to determine what they can tell us about the meteorite’s conditions when it formed. However, it appears that a third potential mineral is already being explored. If researchers could get more samples of the massive meteorite, there would be a chance to find many more.

Unfortunately, according to some reports, the meteorite, inciting lust, was transported to China to be sold there in international markets. Indeed, any new discovery of minerals could eventually lead to interesting and profitable new applications. It remains to be seen if additional samples will be made available for scientific purposes.