Since the arrival of the InSight lander to Mars in November 2018, the number of events recorded on the planet exceeds 1300. To date, the probe continues its mission in accordance with the plan, which is to collect data on the internal structure of the red planet, in particular thanks to its seismic activity. Recently, on May 4, thanks to his SEIS instrument provided by CNES, he was able to detect a magnitude 5 earthquake. This is the strongest earthquake ever recorded on another planet, breaking the previous record of magnitude 4.2 recorded in August. October 25, 2021. The collected data is invaluable, it teaches us more about the red planet.

InSight arrived on Mars on November 26, 2018 within Elysium Planitia, a vast plain located on both sides of the planet’s equator. A stationary science platform, the lander is equipped with a robotic arm on which the main instrument, the seismometer SEIS (seismic experiment for internal structures), provided by the French space agency CNES, is installed.

Studying the internal structure of Mars answers key questions about the early formation of rocky planets in our inner solar system – Mercury, Venus, Earth and Mars – over 4 billion years ago, as well as rocky exoplanets. InSight also measures tectonic activity and meteorite impacts on Mars.

Therefore, the InSight mission aims to figure out how a rocky body forms and evolves to become a planet by studying the internal structure and composition of Mars. Compared to other terrestrial planets, Mars is neither too big nor too small. This means it keeps a record of its formation and can give us insight into the formation of the terrestrial planets.

The high-sensitivity seismometer SEIS aboard Insight recorded the largest earthquake on Mars to date. Be aware that because these “Martian” tremors are generally not as strong as earthquakes, they are harder to detect, and other vibrations, such as from the wind, can interfere with readings. That’s why InSight is equipped with an ultra-sensitive seismometer.

To understand the internal structure of Mars, scientists apply the general principles of seismology. Indeed, as seismic waves travel through or bounce off materials from the crust, mantle, and core of Mars, their velocities change. This change is associated with a change in the environment, and hence the internal structure of the planet. For example, on Earth, the boundary between the earth’s crust and mantle is thus distinguished. Waves change speed as they cross this gap (commonly referred to as the Moho) caused by a large difference in mineralogical composition.

By comparing what they see on the Red Planet with what they know about the behavior of seismic waves on Earth, geologists can determine the depth and composition of these layers: crust, mantle, and core. What scientists learn about Mars’ structure could help them better understand the formation of all rocky worlds, including the Earth and its Moon.

So on May 4, 2022, on the 1222nd day on the Martian soil of the mission, an earthquake of magnitude 5 was recorded, an earthquake of medium strength compared to those that were felt on Earth. NASA’s Jet Propulsion Laboratory (JPL), which manages the agency’s US mission, said in a statement: “A shaking of this magnitude is close to the upper limit of what scientists hoped to measure on Mars during the InSight mission.”

This seismogram shows the strongest earthquake ever recorded on another planet. Its star magnitude is estimated at 5 points. It was registered on May 4, 2022. © NASA/JPL-Caltech.

Bruce Banerdt, InSight Principal Investigator at NASA’s Jet Propulsion Laboratory in Southern California, who is leading the mission, adds: “Ever since we landed our seismometer in December 2018, we’ve been waiting for the ‘big’.

The science team will have to study this new quake before they can provide details such as its location, the nature of its source, and what it can tell us about the interior of Mars. However, while on Earth most of the tremors are caused by plate tectonics, on the Red Planet this activity is mainly caused by volcanoes. But research is ongoing because the hypotheses are still varied.

InSight in the dust, looking for the sun

Sadly, this massive Martian quake came as InSight ran into new problems with solar panels. Although InSight’s location on Mars causes it to enter the planet’s winter phase, there is much more dust in the air, reducing available solar radiation.

On May 7, 2022, the lander’s available energy fell just below the limit, which triggers a safe mode in which the lander suspends all but the most critical functions. In fact, a local dust storm in January had already brought the spacecraft to safety and raised concerns about the length of the mission. This reaction is intended to protect the descent vehicle. Ground crews expect this standby mode to occur more frequently due to the condition of the solar arrays. 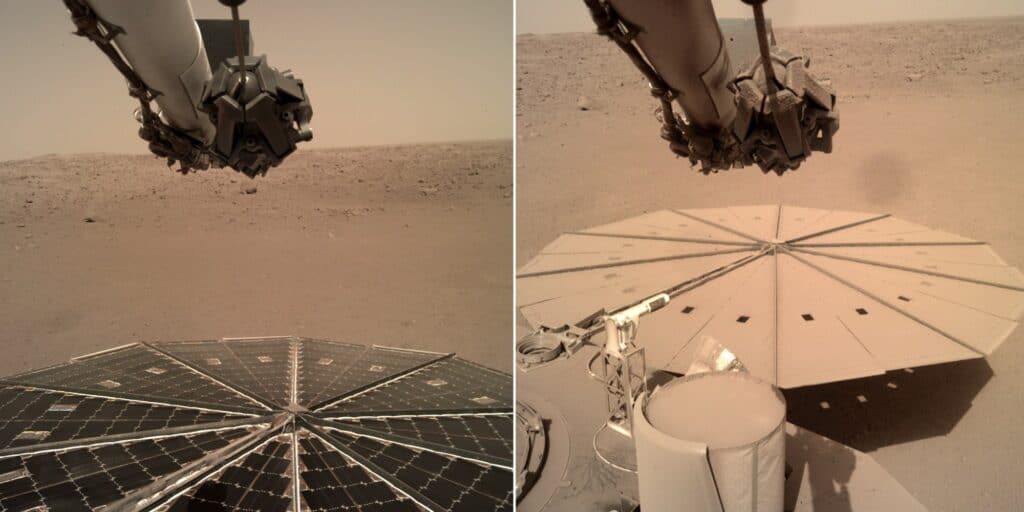 One of two InSight solar arrays shortly after arriving on Mars in late 2018 and recently (right). Pay attention to the accumulated dust, which reduces the efficiency of photovoltaic cells. © Space City/NASA/JPL-Caltech

However, the mission has largely exceeded its original operating (lifetime) goal (until the end of 2020) and its original science goals. She received a budget extension until December 2022. But will the lander be able to survive until then?