Many of us are accustomed to building our own PCs by inserting graphics cards and SSDs into the motherboard. Intel CEO Pat Gelsinger believes the chip industry is about to undergo a major change, with the chips inside your PC “assembled” in much the same way.

It is important. For many years, the PC processor was a relatively simple thing, produced by one company using a single process. But something happened this March that will allow Intel and other companies to mix and match certain pieces of logic within a single chip in much the same way that PC makers build PCs.

This was the introduction of the Universal Chiplet Interconnect Express (UCIe) and the concept is quite simple. Use different “tiles” or chiplets, connect them to a base tile, and connect them all via a standardized UCIe interface to build the chip of the future. It’s pretty easy to see this “base tile” as a kind of motherboard with various components attached to it: graphics, I/O, and so on.

What UCIe does is provide a truly standardized open interface to do this. If you’ve followed the chip industry closely, you may know that “standards” don’t always apply to everyone; that’s why laptops based on Intel Core processors have Thunderbolt ports, while laptops based on AMD Ryzen chips have USB 4 ports – they are functionally equivalent but different. But UCIe is supported by almost all the key players: AMD, Intel, Microsoft, Qualcomm, Arm, Samsung, and TSMC, among others. The only exception at the moment is Nvidia.

Intel Corporation has been working on chip and chiplet design for decades.

Gelsinger actively lobbied for the Chips for America Act, which was signed earlier this month and provides $52 billion for the US chip industry. Gelsinger vowed last year to return to glory by investing in new factories and launching Intel’s first foundry. But Gelsinger said at the Hot Chips science conference this week that he doesn’t want to just build factories for Intel. He wants to build “system workshops” for several clients, all based on UCIe.

Gelsinger was asked if Intel and UCIe’s system factory would allow a “mix and match” approach, where customers can buy chiplets from different vendors and assemble them together. He agreed.

“Yes, it is,” Gelsinger replied. “I expect UCIe to become similar to PCIe. [PCI Express]”.

“We expect UCIe to be the equivalent of this,” Gelsinger added. “You can say, hey, I’m getting two chipsets from Intel. I’m getting one of the chiplets from the TSMC factory, maybe the power supply components are from TI. Maybe there is an I/O component from GlobalFoundries, and of course Intel has the best 3D packaging technology, so they will assemble all these chipsets on the market, but maybe it’s another OSAT. [Outsourced Semiconductor Assembly and Test] provider too.

Meteor Lake: The Next Step

We have been moving towards this for some time, although important work has been done in the last five years. The most high-profile chiplet integration from various sources was Kaby Lake-G, a combination of Intel Core CPU and AMD Radeon GPU released in 2017.

Two other technologies played a crucial role in Intel’s development: the so-called EMIB, which expands chiplets in the 2D plane, and Foveros, which allows chips to be stacked vertically in 3D. In 2019, Intel merged them into what it called co-EMIB. There are a number of terms that are often talked about: disaggregation, tiles, and chiplets. They all mean roughly the same thing: LEGO, but with semiconductors.

Next year, we’ll see this concept come to life with Intel’s “Meteor Lake” chip, which Intel detailed at Hot Chips. At the bottom is the backing of the packaging. Above is the “base tile”. Above them are various tiles, notably the GPU tile, the CPU tile, the SOC tile (essentially Media, Image, and Display), and the I/O Expansion (Chipset) tile. Intel processors have traditionally contained two dies in a single package; now there are essentially four. 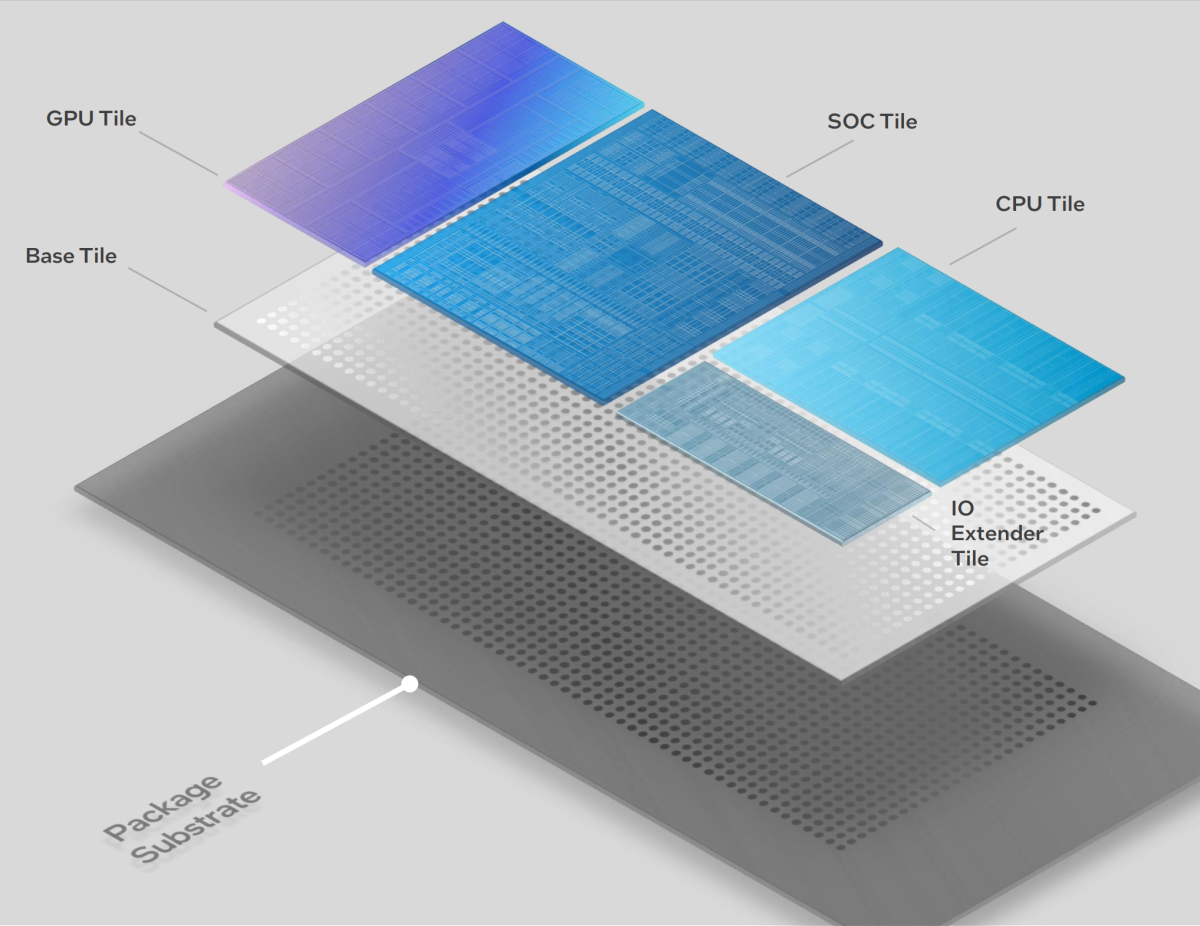 The tiles are stacked on top of each other in layers connected using the Foveros technology. The base tile routes power and data to the various tiles.

Earlier this week, Intel overlooked that we are already seeing Gelsinger’s disaggregation vision come to fruition, as most Meteor Lake components are made by TSMC, not Intel, but will be assembled into a Meteor Lake chip. At Hot Chips, Intel executives showed how each tile could be made with different variations, such as multiple power and efficiency core configurations, GPUs with more processors, etc. It also doesn’t matter if some tiles are made on based on the Intel 4 process, TSMC production line, or whatever, as they can be inserted and reused in future generations of processors. (However, Meteor Lake does not use UCIe since the spec was finalized just a few months ago.)

However, we know it works. Intel has working Meteor Lake samples that it has successfully booted onto PCs, executives say.

Will performance suffer? Will it be more expensive?

This is a fundamental change in Intel’s historical position: to build one powerful “monolithic” chip and stick it in a PC, a server, and (hopefully) a laptop. What was very interesting was that Intel’s Hot Chips presentation for Meteor Lake (and its successor, Arrow Lake) addressed this issue directly. Can Intel get monolithic performance with the benefits of a disaggregated architecture?

Answer? Intel believes that it can be closed. According to Wilfred Gomes, an Intel microprocessor designer, there will always be performance and power loss when moving data from tile to tile. But this “disaggregation tax”, according to Intel, will be only about 2-3 percent, and it is outweighed by the flexibility that disaggregation provides. (Intel didn’t specify whether it’s performance or power, or what it’s comparing those numbers to.) 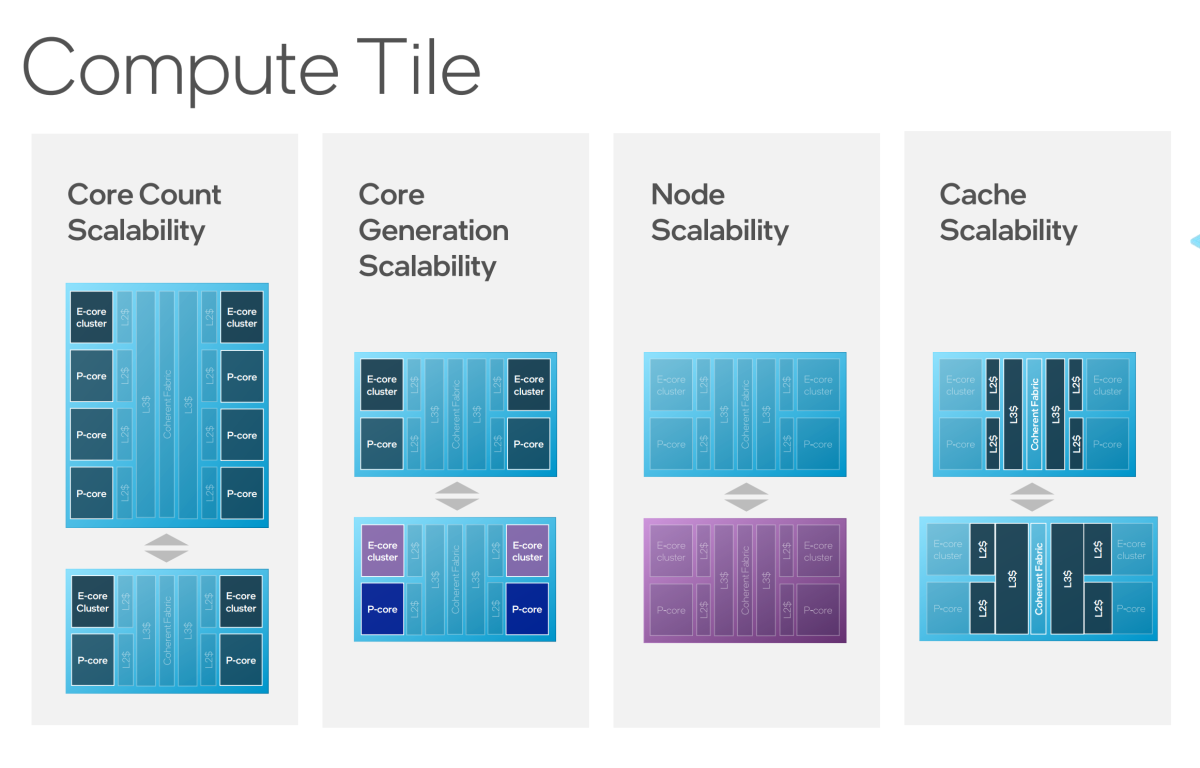 You will still see Intel Core processors with different number of cores, cache sizes, and so on. But this complexity will occur in other tiles as well.

Flexibility also affects your wallet. Intel’s goal is to create chips with a trillion transistors by the end of the decade. But not every chip can be made without errors. A lithographic error or simply scattered radiation can kill the entire chip. (Or partly, which is why Intel’s F-series chips lack a capable GPU.) It’s much cheaper to throw away a 100 million transistor tile than a much more expensive trillion transistor monster.

It’s important to note that while AMD Ryzen is also forging ahead in the chipset space (and offering performance that rivals and even surpasses Intel), Intel is leading the way when it comes to open conversations about mixing and matching chiplets and tiles. AMD, in contrast, is taking a more monolithic approach despite Ryzen using multiple chiplets.

So what does all this mean for you? Two things, essentially. First, the increasing complexity and flexibility that Intel’s disaggregation strategy provides in chips like Meteor Lake means they will become increasingly difficult to describe; we already have a mix of performance and efficiency cores, base and turbo clocks, integrated graphics cores, and more in 12th gen processors. Soon the specs could be even more dizzying.

The second one, however, is more interesting, even if it still feels like something out of science fiction, for now. A world where someone (company? you?) can order chips in much the same way you order a sandwich or a custom-made car is a powerful vision. Chip specialists understand that programmable logic, or even ASICs, have offered similar capabilities for decades. But for the mainstream enthusiast, this semi-custom future enabled by UCIe could mean a dramatic rethinking of how your PC’s processor is made.