Sciences et Avenir: At each official speech, starting with President Xi Jinping, a Chinese civilization is evoked which would have been uninterrupted for 5000 years…. Is this historically fair?

Anne Cheng: It’s a formula that has emerged fairly recently in the 2000s. Until now, dating in China has been based on Historical memories by Sima Qian (145-89), the great historian of the Han period, who started the Chinese chronology attested to 841 BC. J.-C, the beginning of the Western Zhou dynasty. That is to say in total three millennia. In 1996, the Chinese government launched a large project to determine a reliable chronology of the first three dynasties of antiquity (Xia, Shang and Zhou). In reality, the stake at the heart of this one-upmanship of millennia was to “pull the rope as much as possible”, to bring Chinese civilization as far back in antiquity as the Egyptian and Mesopotamian civilizations.

AC: After a trip to Egypt where he saw that the history of the ancient Egyptians dates back to 2350 BC, the chief responsible for the program to establish a reliable chronology of the first three Chinese dynasties said to himself “We Chinese should achieve the same results As these Mediterranean civilizations. He convinced the Chinese government to fund “the first three dynasties chronology project” by including it in the 9e Five-Year Plan (1996-2000).

Is this why the China has launched a vast archaeological program to justify the origin of its history in older times?

AC: Indeed, a special committee supervised by historian Li Xueqin – at the time director of the Institute of History of the Chinese Academy of Social Sciences – recruited 200 scholars in various disciplines (history, astronomy, archeology, physics …) to collaborate, carry out carbon-14 dating and thus manage to trace the beginning of Chinese chronology to the year 2070 BC. JC This result was announced in a report in November 2000. The Xia dynasty, which until then had always been considered a mythical dynasty, now extends from 2070 to 1600 BC, followed by the Shang from 1600 to 1600 BC. to the conquest of the Zhou in 1046. More recently in 2001, the Chinese government launched a sequel to this Three Dynasties project entitled: “Exploring the origins of Chinese civilization” in an attempt to trace all this back even further.

Nicolas Idier: For a long time, the built unity of Chinese civilization was based on this very strong factor that their writing had appeared around 1500 BC. JC These new dates set at 2070 BC from an older origin in China shatter what has long been the main unifying factor of this civilization.

So a continuous history of China for 5000 years is a myth?

AC: If we understand history as the period for which the first traces of writing were found – on the shells of turtles and on the bones of ovids and bovids – this is indeed incorrect. The so-called oracular inscriptions, which are the ancestors of modern Chinese scriptures, date at best to the Shang Dynasty, around 3,000 to 3,500 years ago. We are therefore far from the official vulgate of 5000 years of continuous history….

Did this question of origins arise at other times in Chinese history?

OR : In the 18th century, European Jesuits led a somewhat similar policy by questioning the oldest civilizations. Some considered it to be Egypt, others China.

AC : Since the 1950s, Chinese archeology has been a scientific discipline serving a political program: there is a close relationship between archeology and nationalism. This is not a Chinese exclusive because let us remember that Nazi Germany did the same (read Sciences et Avenir n ° 724).

In your course at the Collège de France, you say that the Chinese term wenming (civilization) is currently omnipresent in official Party rhetoric and propaganda. Why is the use of this word so important to leaders?

AC: The appearance of the term wenming from ” 12 cardinal values ​​of socialism * “, adopted since the 18th centurye November 2012 congress, is visible everywhere, whether on the street, restaurants, schools, hospitals or elsewhere. It is this constant recurrence that intrigued me. After the Cultural Revolution (1966-1976), a period during which China destroyed everything it could still destroy from its old culture, the country is now putting civilization forward as if to replace what has been conscientiously demolished. However, this concept… is a Japanese invention of the Meiji era (1868-1912)! The Japanese, as we know, took old terms from ancient Chinese vocabulary, which they recombined in their own way to translate Western concepts such as “philosophy”, “religion” or “civilization”. And China has taken up these “turnkey” concepts. Wenming written in kanji – Japanese characters borrowed from Chinese-, no one has remembered the origin of this term. So much so that the official story goes that this is an expression that originated in ancient China! Which is wrong. In the ancient context, it describes something refined and luminous, which has nothing to do with the European definition of the word civilization!

Didn’t the notion of civilization exist in China before?

AC: China, which says Zhong hua in Chinese, considers itself “THE” civilization! And all that is outside of this Zhong hua, what is peripheral, they are “the others”!

Your course at the Collège de France is entitled: “Is China (still) a civilization”? Why such a question?

AC: I am asking this somewhat provocative question precisely because the official Chinese discourse takes pleasure in evoking the greatness of Chinese civilization, while trying to make people forget all the violence of the Maoist regime. Whether it is the events of the Cultural Revolution or those of Tian’anmen Square (1989): or the “anti-rightist” campaign (1950-1960), which saw thousands of people perish in camps. The paradox that I am denouncing is that China is praising its history while conscientiously erasing it. She cultivates amnesia and, at best, an extremely selective memory. Constantly use the reference to the “century of humiliation”, (XIXe-XXe century), immediately after the events of Tian’anmen in the 1990s, it is precisely to make people forget what happened there and everything that came before. The sudden resurgence of the word civilization is not the sign of a rebirth, but an attempt to make people forget a past that does not pass. With the fall of the Berlin Wall (1989) and the implosion of the Soviet Union that followed, the Chinese authorities decided that the Russian “perestroika” was not the example to follow. The collapse of the USSR is a key to understanding the Chinese turn of the screw.

NI: The Chinese want at all costs to create a national story showing the unity of this nation, for fear of panic internal divisions! This monolithism – which many Chinese accept – serves to cement the people by showing them that what is happening in democracies is only instability and disorder. It legitimizes all government talk. All Chinese are watered, on social networks, in books or by audiovisual productions, cartoons or TV series winding a mythological golden age constantly rewritten. 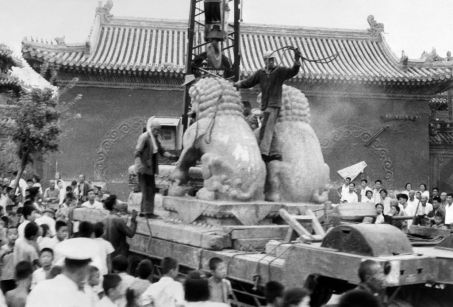 Chinese Red Guards remove two ancient stone lions from a street in Beijing on August 25, 1966. During the Cultural Revolution, the orderly deaths were: “Destroy the old culture.” © AFP

Is it for this reason that all the heritage places destroyed in particular during the Cultural Revolution? have been rebuilt as new, in cement?

AC: As Simon Leys (1935-2014) said, at the time of the Cultural Revolution, there was not much left to destroy. Today, we are witnessing a “Disneylandisation” of the country. At the same time as we rebuild cement temples, we are reinventing a mythology. The new generations knowing nothing else, it all goes very well. What matters for the Chinese, especially the majority Han, is to live in a peaceful and prosperous country.

NI: Let us recall that the nationalist troops who left mainland China in 1949 for Taiwan took with them enormous quantities of works of art: bronzes, paintings … Their political legitimacy was also based on this past. The rare large Chinese art objects that have not been destroyed are still in Taiwan!

You say you have to shift your focus on China to understand its future, by adding “if she has one”…. Why ?

AC: China in my opinion is a kind of liner … which, if it continues its momentum, is heading straight for the iceberg. It will take time, but I think that all the countries which claim to be great civilizations and which no longer exist cannot hold out for long. China “holds on” thanks to its economic prosperity, its military and geopolitical power. But if we look beyond the smokescreen we are served, we can see that she loses her creativity. By dint of preventing people from thinking, of imprisoning them as soon as they leave the line, of preventing them from writing freely, new and innovative ideas are no longer forged. Power becomes technocratic, “Orwellian”, holding all the levers of power but unable to create. How to build a civilization on it? No country in the world has destroyed its heritage like China. Even Stalinist Russia did not do it on such a scale.

OR : The idea is to create a kind of “endless day”, where everything would be harmonious. Everything becomes mythical. The past is a golden age, the future a science fiction. Still, there are individuals in China who will know how to open breaches when the day comes.

Confinement season 3 in Nice and Dunkirk, episodes to follow?

Radioactive Sahara sand dust: “It comes back to us like a boomerang”

Terminator: Netflix is ​​preparing an animated series developed by “The Batman” co-writer

AI projections: Akhenaton and Nefertiti would be black

Confinement season 3 in Nice and Dunkirk, episodes to follow?

Radioactive Sahara sand dust: “It comes back to us like a boomerang”

Terminator: Netflix is ​​preparing an animated series developed by “The Batman” co-writer

AI projections: Akhenaton and Nefertiti would be black