NASA’s James Webb Space Telescope continues its mission to search for traces of life elsewhere in the universe. He recently provided the most detailed analysis of the atmosphere of exoplanet WASP-39b to date. Thus, the researchers were able to identify a new molecule in its atmosphere: sulfur dioxide, whose presence can only be explained by photochemistry (a reaction caused by starlight) necessary for the processes that ensure life on the planet.

But WASP-39 b is a planet unlike any other in our solar system. It is massive, about the size of Saturn, and orbits its star closer than Mercury is to our Sun, about 700 light-years from Earth.

This exoplanet was one of the first to be explored by the James Webb Space Telescope when it began its regular scientific activity. The results have excited the scientific community working on exoplanets.

Sulfur dioxide, the first detection in the planet’s atmosphere

You should be aware that the presence of sulfur dioxide can only be explained by photochemistry. In other words, this molecule is formed as a result of chemical reactions caused by high-energy light from the planet’s parent star. On Earth, photochemistry is essential for life-related processes such as photosynthesis and the formation of a protective ozone layer in the upper atmosphere.

The process of formation of sulfur dioxide in the atmosphere of the planet. © NASA/JPL-Caltech/Robert Hurt; Harvard and Smithsonian Center for Astrophysics/Melissa Weiss

Diana Powell, NASA Hubble Scientist, Center for Astrophysics astronomer and lead member of the team that discovered sulfur dioxide, said in a statement: “The startling discovery of sulfur dioxide finally confirms that photochemistry is shaping hot Saturn’s climate. Earth’s climate is also determined by photochemistry, so our planet has more in common with “hot Saturns” than we previously thought.”

This discovery, combined with the fact that Wasp-39b is very close to its star, allowed researchers from another group to study the effects of parent star radiation on exoplanets by Shang-Ming Tsai, a researcher at Oxford University in the UK and lead author. an article explaining the origin of sulfur dioxide in WASP-39b’s atmosphere explains: “This is the first time we’ve seen concrete evidence of photochemistry on exoplanets.”

A better knowledge of the connection between a star and a planet should lead to a better understanding of how these processes affect the variety of planets observed in the galaxy and point the way to finding evidence of potential life on a habitable planet.

The Complementarity of James Webb’s Tools Reveals Many Molecules

To see the light from WASP-39 b, Webb tracked the planet as it passed in front of its star, allowing some of the star’s light to seep through the planet’s atmosphere. Different types of chemicals in the atmosphere absorb different colors of the starlight spectrum, so the missing wavelengths tell astronomers which molecules are there.

To capture the wide spectrum of WASP-39b’s atmosphere, a large international team used three different instruments on the telescope: NIRSpec (in two different observing modes), NIRISS, and NIRCam. The researchers obtained transmission spectra during four passes of WASP-39b, covering infrared wavelengths from 1 to 5 microns. They then conducted a detailed comparison of their findings, obtaining even more accurate results from a scientific point of view.

Natalie Bataglia, professor of astronomy and astrophysics at the University of California, Santa Cruz, who leads the JWST Transiting Exoplanet Early Release Science Group, explains in a statement: “Wide wavelength coverage gives a more complete picture of conditions in the atmosphere. In addition, each transit observation gives a spectrum of planets at different but overlapping wavelengths, allowing us to test the reproducibility of each instrument.”

Specifically, by viewing the universe in infrared light, Webb can detect chemical fingerprints that are undetectable in visible light, including sodium (Na), potassium (K), and water vapor (H2O), confirming previous observations from space and ground-based telescopes. Moreover, these data clarify the picture of the clouds present: they would be scattered, which means they would not form a single homogeneous cover on the planet.

Webb also detected the presence of carbon dioxide (CO2) at higher resolution, providing twice as much data as his previous observations had reported. Although carbon monoxide (CO) was detected, methane (CH4) and hydrogen sulfide (H2S) were absent from the data. If present, these molecules occur at very low levels, which is an important discovery for scientists taking inventory of exoplanet chemistry to better understand the formation and development of these distant worlds. 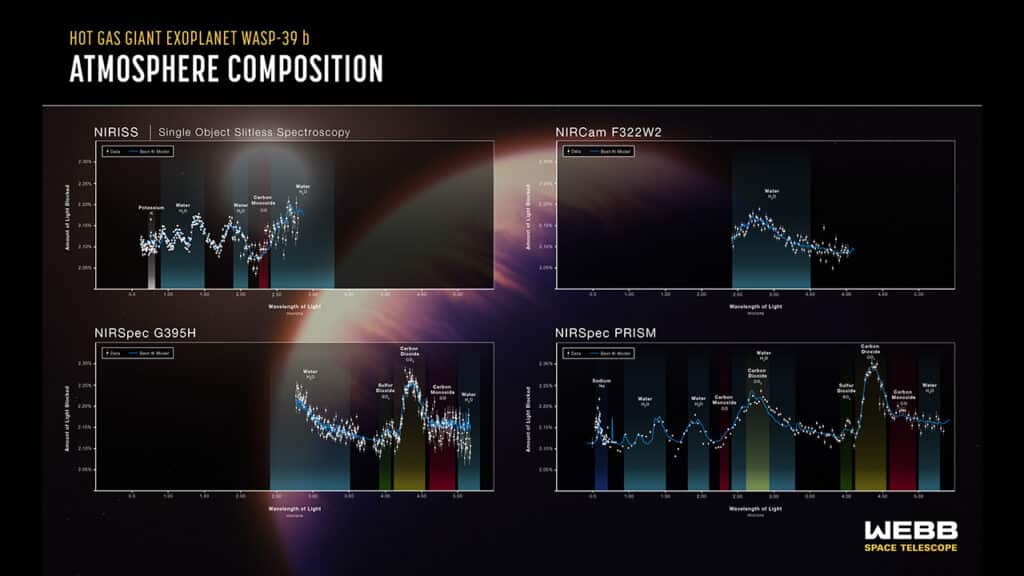 Turn on the story

Having such an exhaustive list of chemical elements in an exoplanet’s atmosphere also gives scientists an idea of ​​their abundance relative to each other, such as the carbon-oxygen and potassium-oxygen ratios. This, in turn, provides insight into how this planet – and possibly others – formed from a disk of gas and dust that originally surrounded the parent star.

Thus, this WASP-39b chemical inventory suggests a history of collisions and mergers between smaller bodies called planetesimals. For UC Santa Cruz exoplanet researcher Kazumasa Ohno, who worked on the Webb data, the sulfur relative to hydrogen indicates that the planet has experienced significant accretion of those planetesimals that provided these elements to the atmosphere.

She adds: “The data also indicate that there is much more oxygen in the atmosphere than carbon. This potentially indicates that WASP-39 b originally formed far from the central star.”

By analyzing the exoplanet’s atmosphere with such precision, the Webb telescope’s instruments exceeded scientists’ expectations. These results augur well for the ability of the Webb instruments to carry out numerous missions on all types of exoplanets, including small rocky worlds such as the TRAPPIST-1 systems. A new way of exploring distant worlds has just been discovered.